A Trip To Venezuela In Versalles 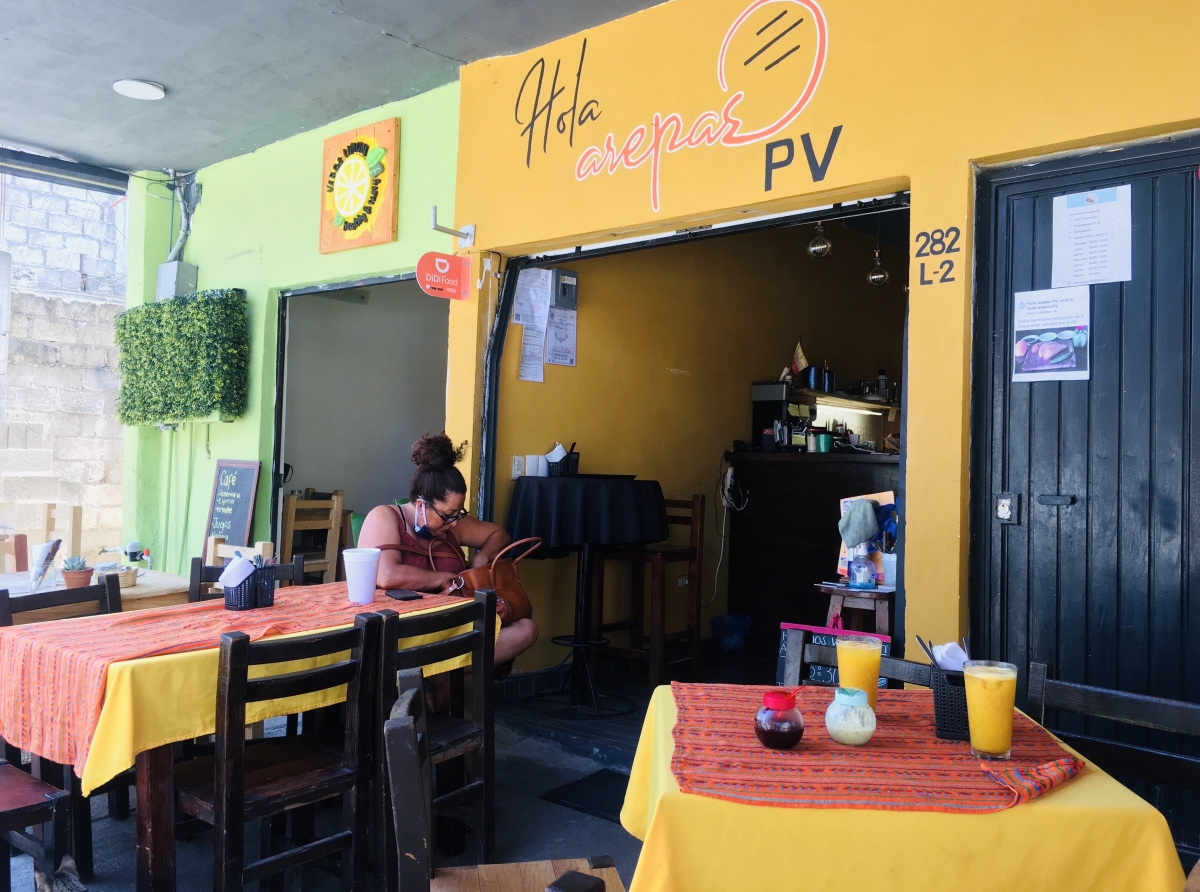 Today we went out to a delicious Venezuelan restaurant.

Doing school has been taking up most of my time, and I haven’t really had time to go out to eat and then write a review, but it’s been a while since I have and today I took a break from school and we went out to a restaurant. We both wanted to go to a really good restaurant, since I don’t get a chance to go out much, so my dad and I spent about an hour looking on Facebook for a place to go to. But, after a while we finally choose a place; Hola Arepas. It’s located on España 282 Local 2 in Díaz Ordaz, and is right next to El Chinelo Grill, which I wrote about before. You can read the article here. 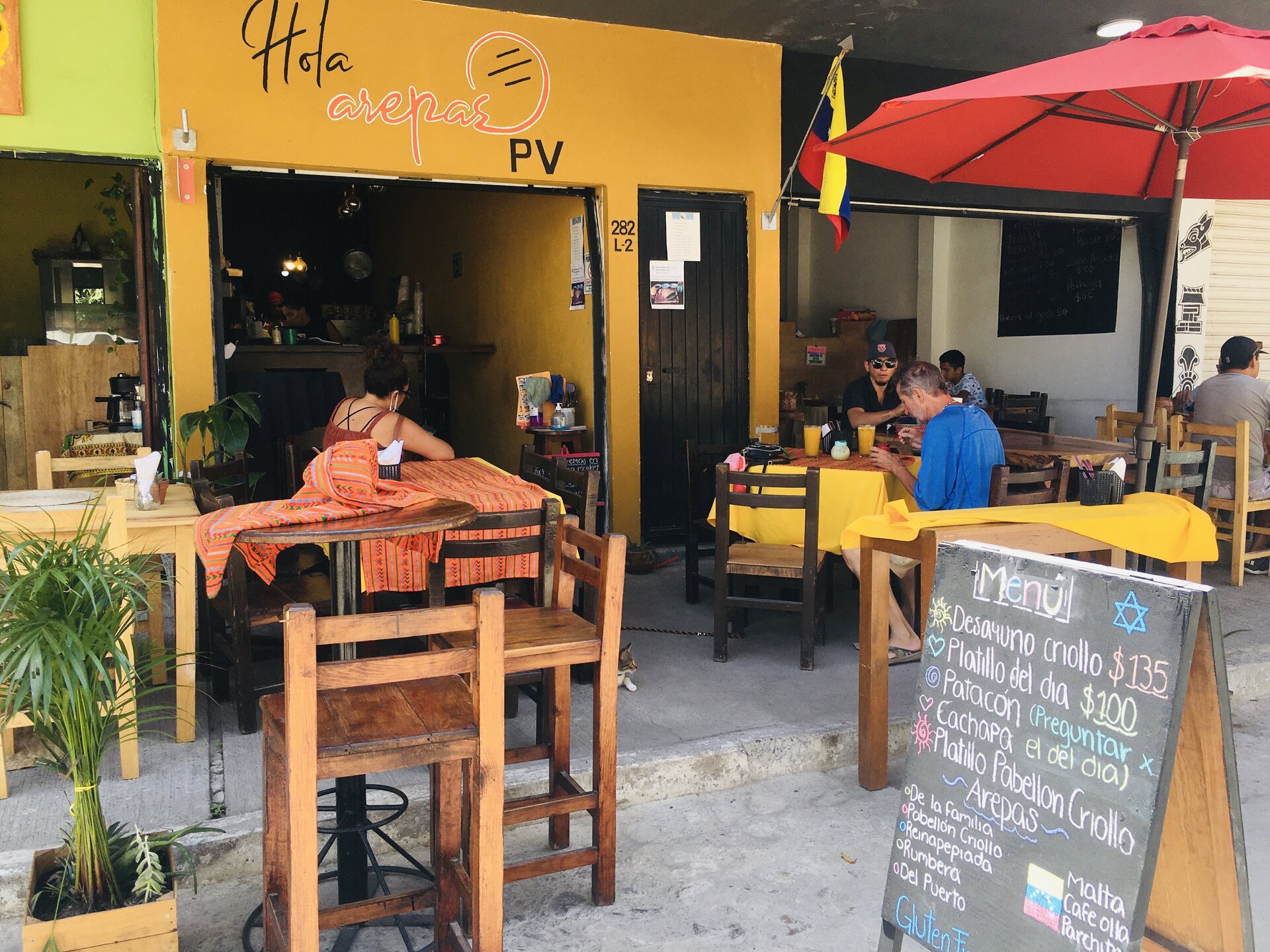 Moving on, Hola Arepas is a traditional Venezuelan restaurant, and many of the foods and recipes are right from the owner’s hometown! Most of his dishes will either contain garaotas, which are black beans, and/or plantains. He told me that this is because there are extremely common to be used in most Venezuelan meals, and he tries to make every single dish not only taste great but also authentic. His specialty is the arepas, with over 20 options you can choose from! And, aside from that, he has fried empanadas, patacón, chachapas, and other sides and appetizers, all equally as traditional, and equally as delicious. 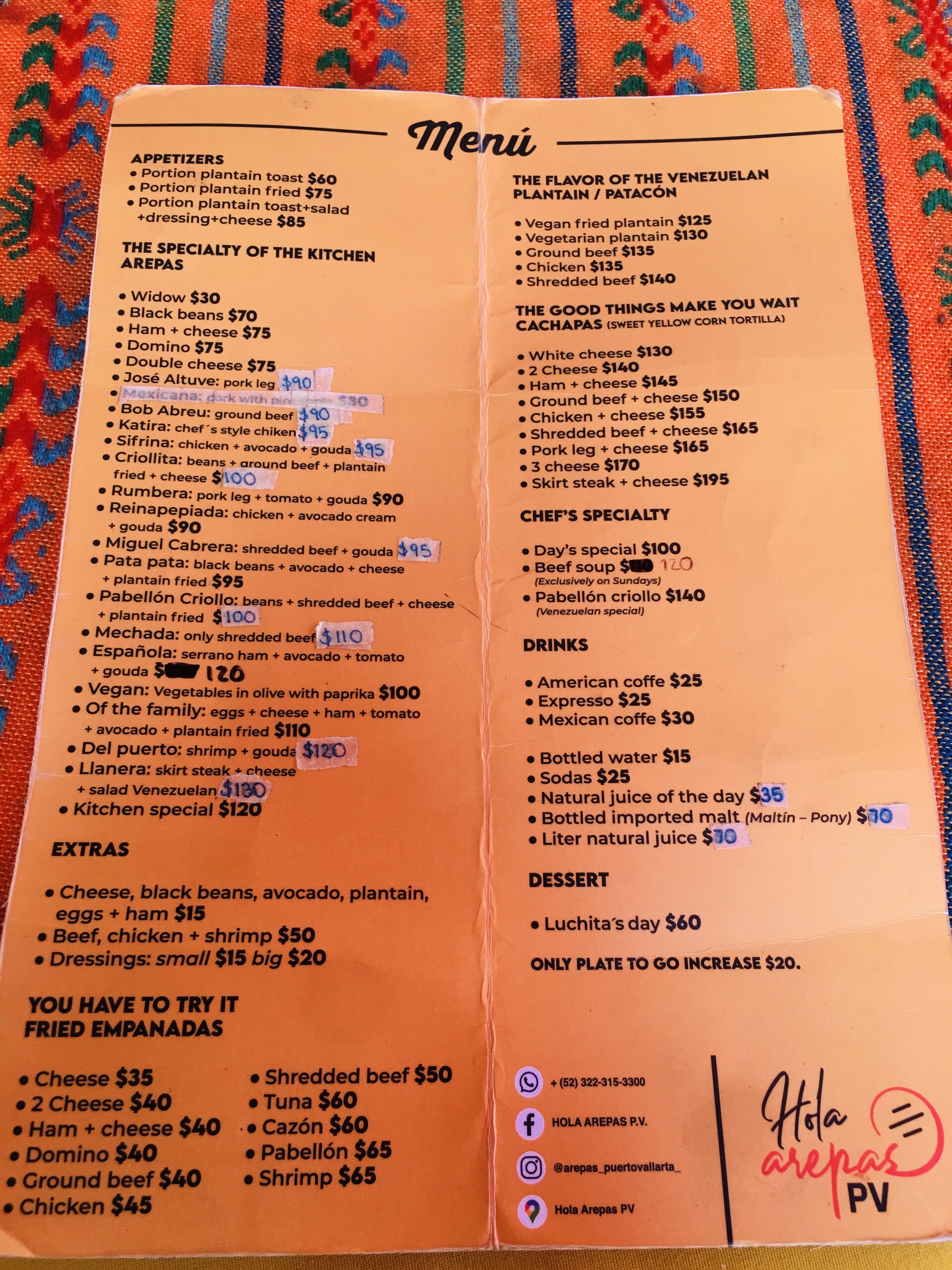 I, as usual, had a hard time figuring out what I wanted to order, and the more I read on the menu, the more uncertain I was! It all sounded so good! But, of course, I had to order, and I ended up getting a José Altuve arepa, which had cheese and pork leg! When it came out I couldn’t wait to take a bite into it, because not only did it look good, it had a strong smell of pork-y goodness. And once I tasted it, there was that pork-y goodness! It was delicious! The pork not only had great flavor on it’s own, but it also had a sweet and slightly sour sauce to it, which was probably made from citrus fruits, but maybe even jamaica! And, speaking about jamaica, they had a great jamaica-habanero sauce on the table, and it was super good. It wasn’t spicy at all, but you could definitely taste the peppers in it. Another sauce they had was Guasacaca, a garlic sauce, and was specifically for the arepas, and that too was so good! My dad even got a liter of it to take home, and he used it later that night as salad dressing! 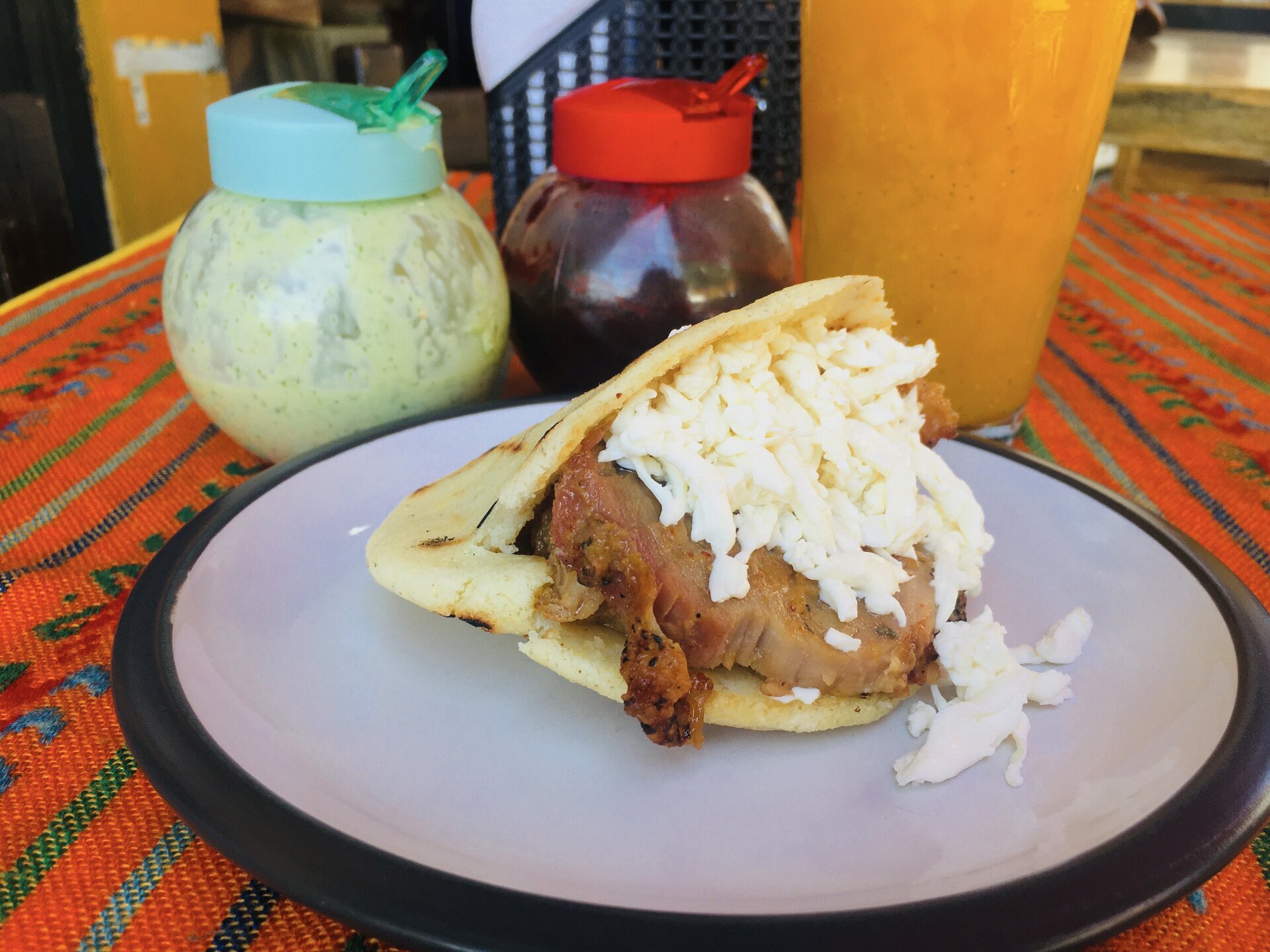 My dad got a Reinapepiada arepa, which had chicken, avocado cream, and cheese. But, as usual, my dad spent his time tasting the two salsas as he waited for his food. Actually, when he tasted the Guasacaca sauce he could tell that the chef knew what he was doing, and probably even went to culinary school, just because of how well balanced and perfect it was. It was salty, and had a strong garlic flavor, but it somehow wasn’t spicy or overwhelming. And once my dad got his arepa he drowned it with that sauce, and then put a little bit of the jamaica-habanero sauce on top. It seemed more like he was having sauce with a side of arepa rather than an arepa! But, he enjoyed it and said it was very good. He also said that it too was perfectly balanced, and if one thing was lightly different it wouldn’t have been nearly as good! Which, was another reason why he believed the chef went to culinary school. 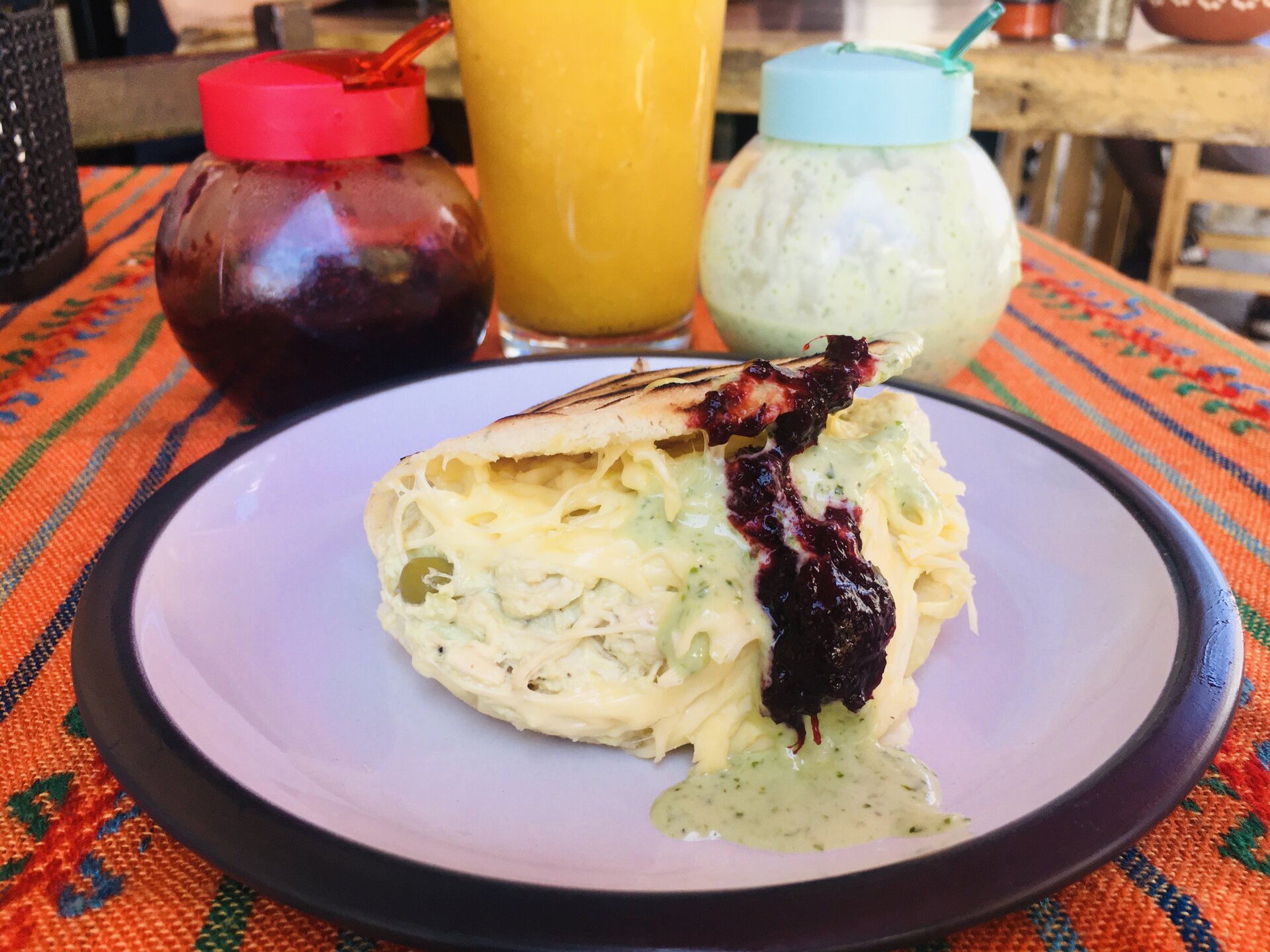 Like I normally do, after we finished our meals I talked to the owner a bit, who was also the chef, and turns out my dad was right once again! He did go to culinary school, but not only that, cooking is his passion!! Most of his life he’s worked at restaurants or with other cooks, and he even worked as a private chef, which he still sometimes does through Chef a Home Reserver. And, for 4 years before he opened his restaurant he would sell his arepas at the Marina Farmer’s Market, but, one day he decided to open up his own place, and work for himself. So 1 year and 4 months ago he opened up Hola Arepas with his wife and kid, and now sells mouth-watering arepas and other meals, all with a little piece of Argentina in them. 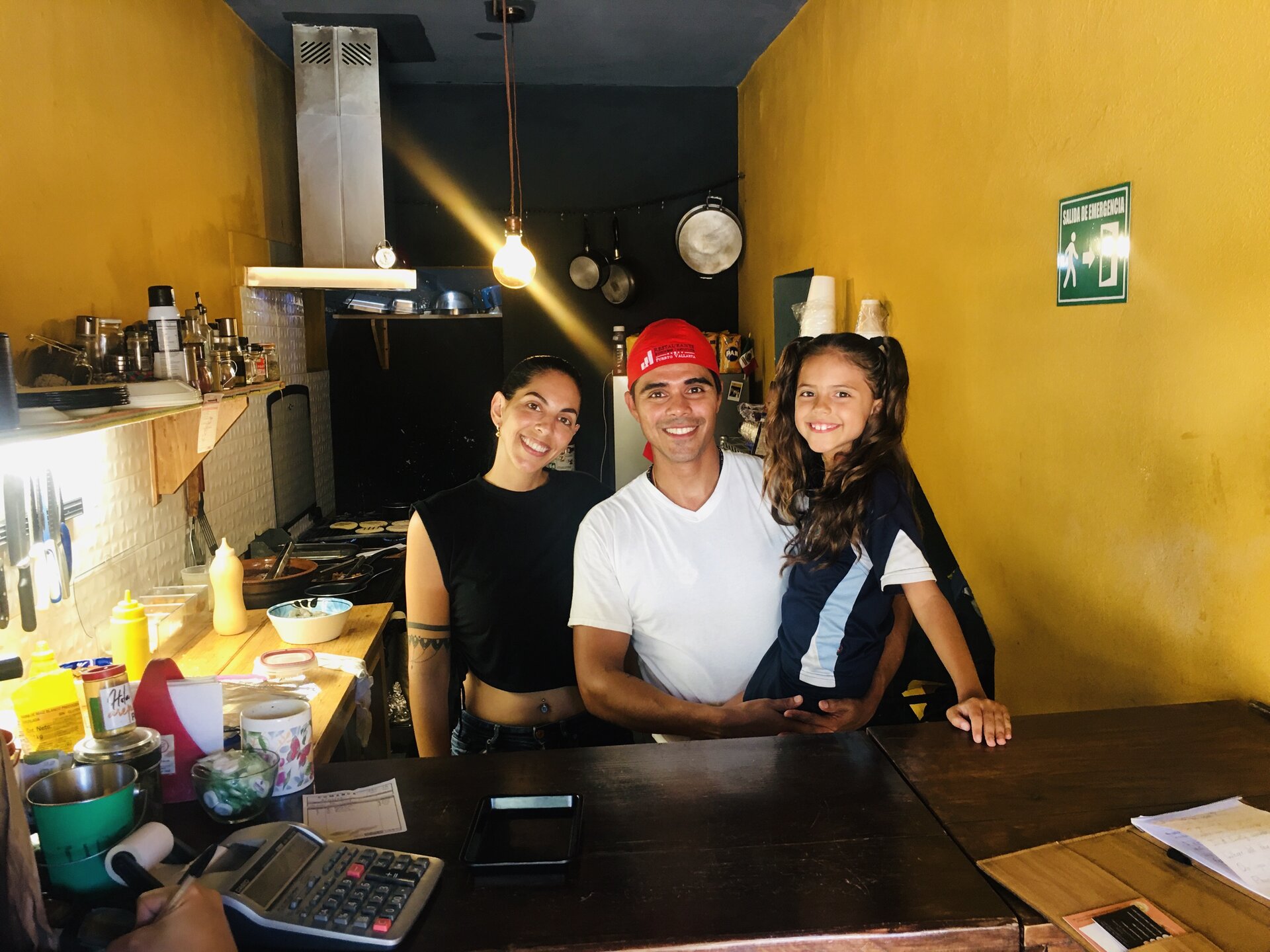