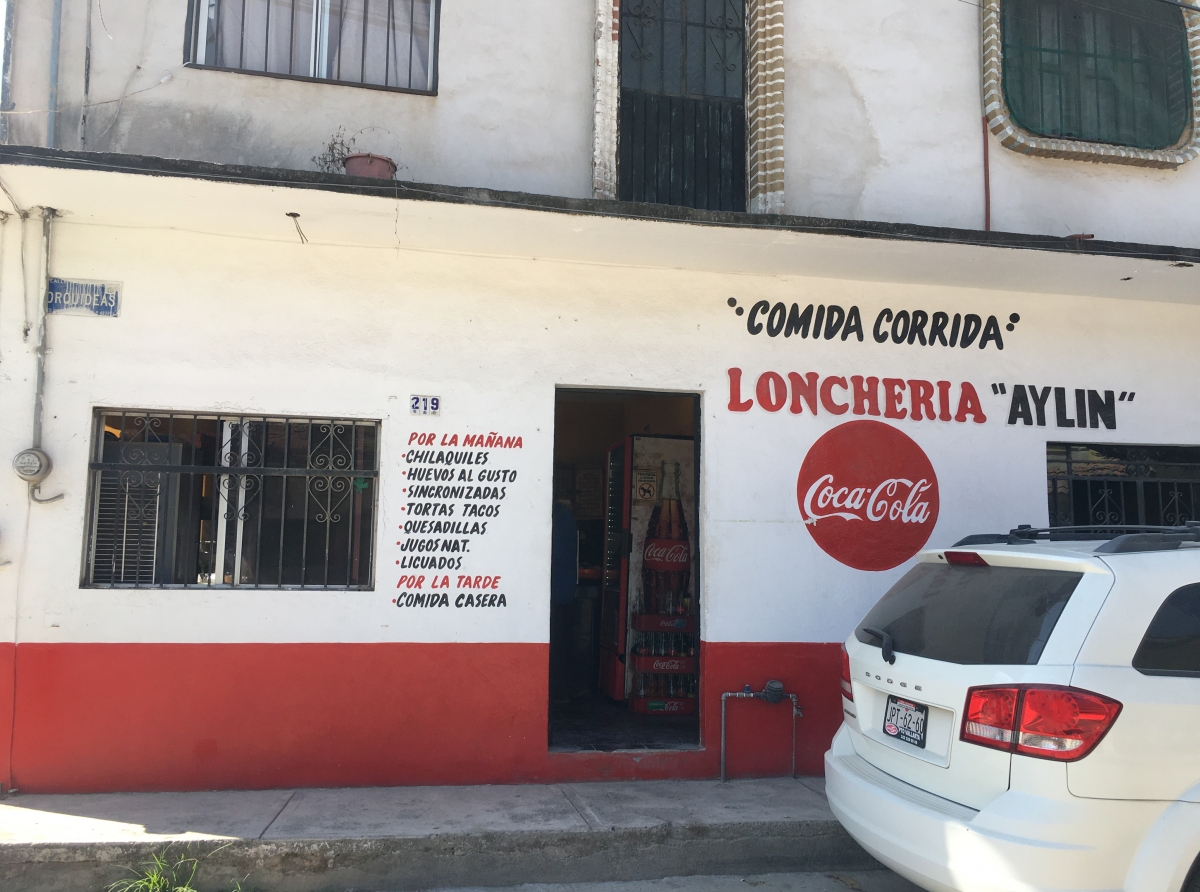 Today we went to a nice little Fonda by the Marian with really good and low-cost food.

When I write about a restaurant I mostly try to stay out of the tourist zone or places that tourists visit, such as in El Centro or the Marina, but every so often were in or by an area like that, and every so often it’s good to write about a place closer to tourists and expats. And, today my dad had to go to the bank, which is by the Marina, and we ended up finding a little fonda that was suuuuper good and really low cost that is quite close. It’s called Loncheria Aylin, and is located on Orquidia 219 in Villa Las Flores. 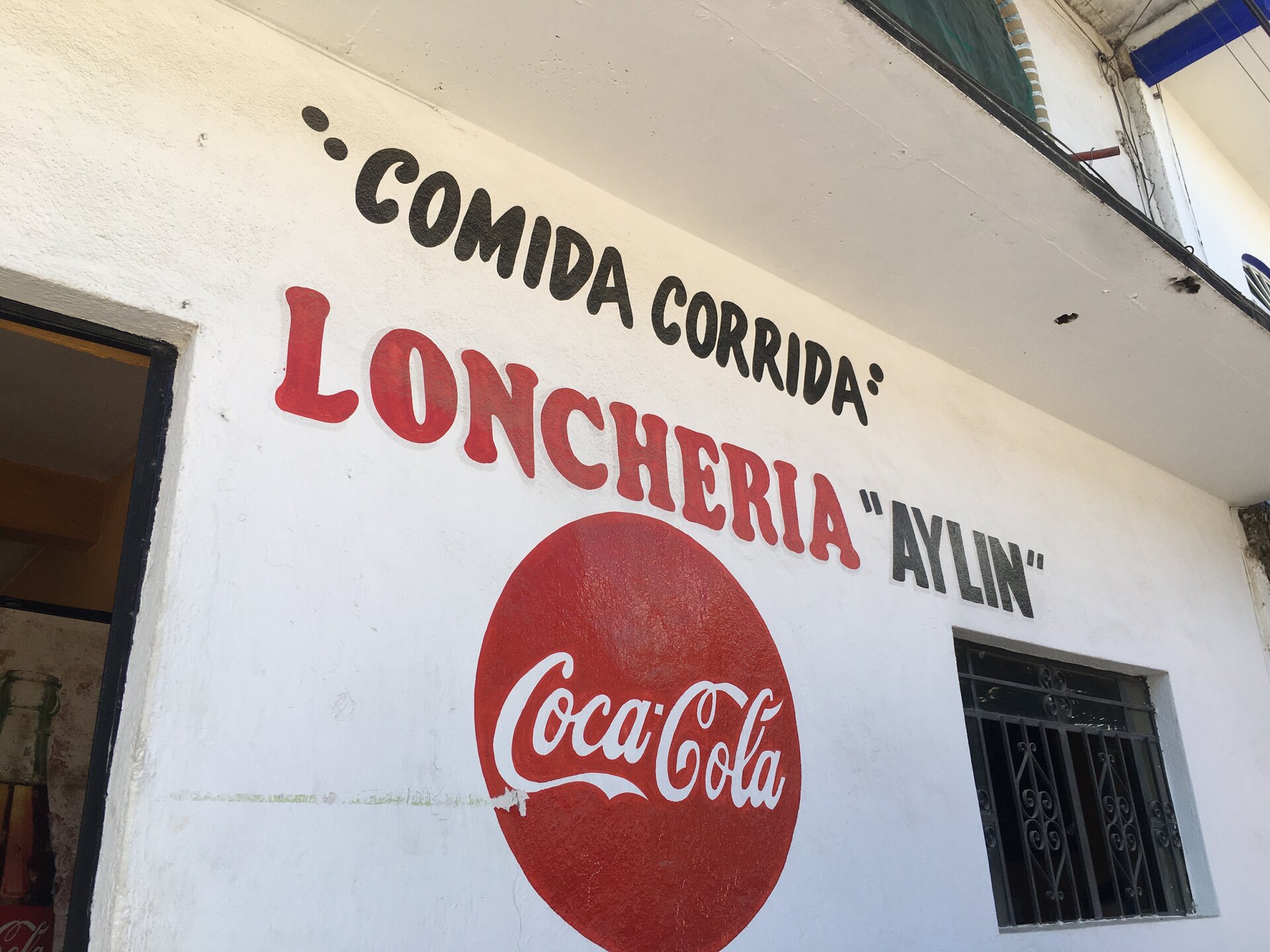 Loncheria Aylin is a really small place, but you receive really great flavors of a home-cooked meal. You really do feel the effort that got put into making this yummy food! Everything but the tortillas are home made, and it’s so delightful! They’re menu also changes every day, if you can even call it that. It’s not a really a menu, or even a chalkboard, it’s more like some different dishes written as list in a notebook. But, that’s not bad at all, and it actually adds more to the home-y feel of the place!

They had a lot of options today, like 6 or 7, and they all sounded really good so it was hard to choose, but, finally, I choose chicharon en salsa verde, and I got a liter of Jamaica. I’m not going to lie, the texture was very… strange, but thye flavor definelty made up for it! I’ve said this before, but I don’t really like the falvro of tomatillos, or green tomatoes, but this sauce I really really liked!  I don’t know what all it had in it, but it was a little bitter from the tomatillos, a little bit spicy, and it was perfectly salty. It’s actually kinda rare when I find a meal that I don’t need to add salt to, but this definitely was one of them! 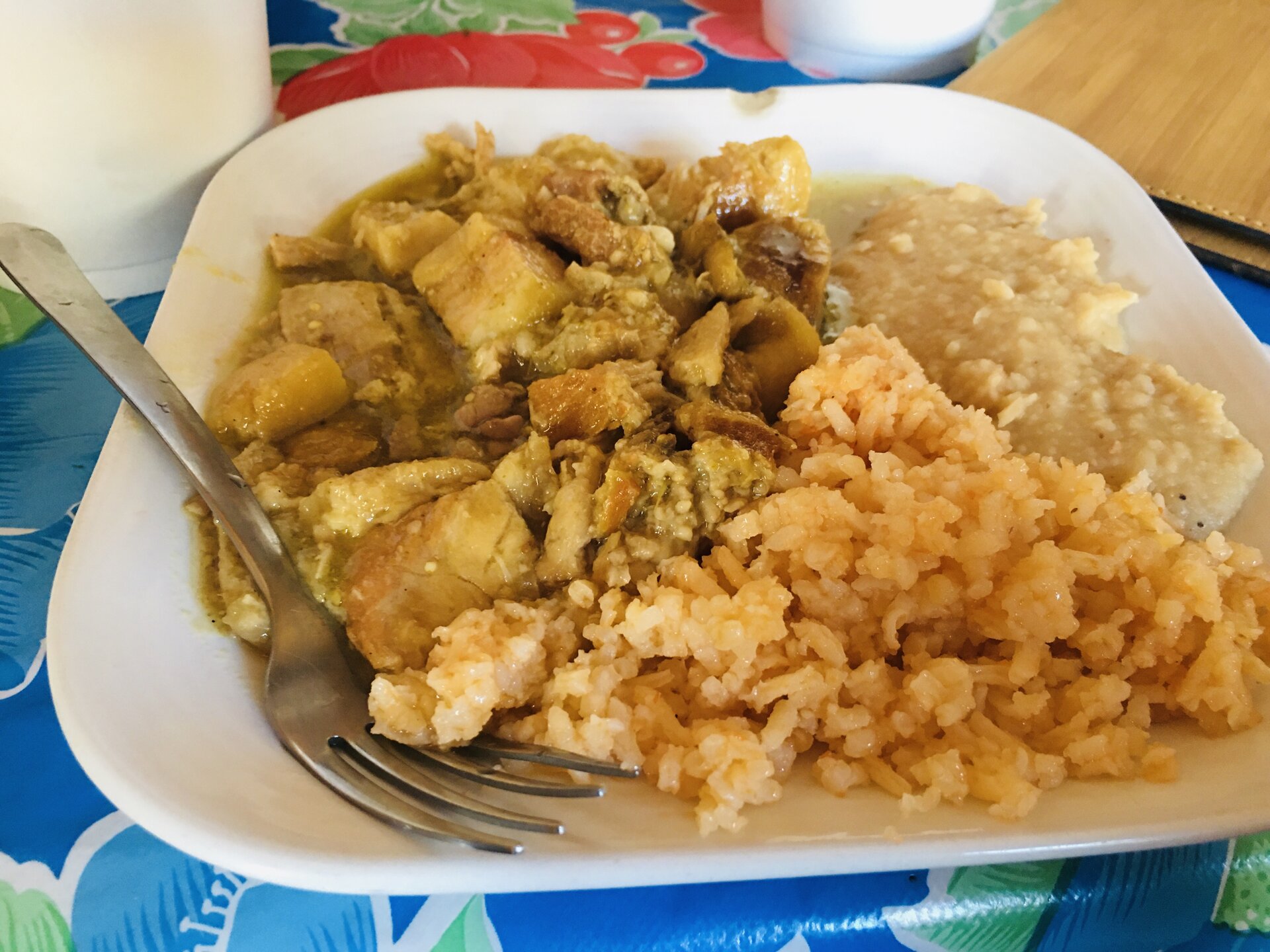 My dad got costillas en salsa verde, but of course he had to try the salsas before he even touched his food. There were two of them; one green and one red. The green was pretty mild, but it did have some spiciness to it, and it too had a teeny tiny bit of bitterness, so it might’ve had some tomatillo as well. The red one was also really good, and instead of tomatillo it seemed that tomato was used, maybe a little onion, but to be honest it was hard for my dad or me to tell what was in it since it was blended so well. And, then when we asked the owner later, she told us that she couldn’t say because it was a family secret. But anyways, back to the food. My dad ended pouring all of the green sauce on his plate and half of the red one, so even though his sauce was originally the same as mine, it tasted much different, and to be honest it tasted better! Though, don’t get me wrong, I’m not saying that I was bad before. But it was so good that my dad was grabbing tortilla after tortilla and dipping it in the sauce, so he got super full from the tortillas and the delicious, tender pork ribs. 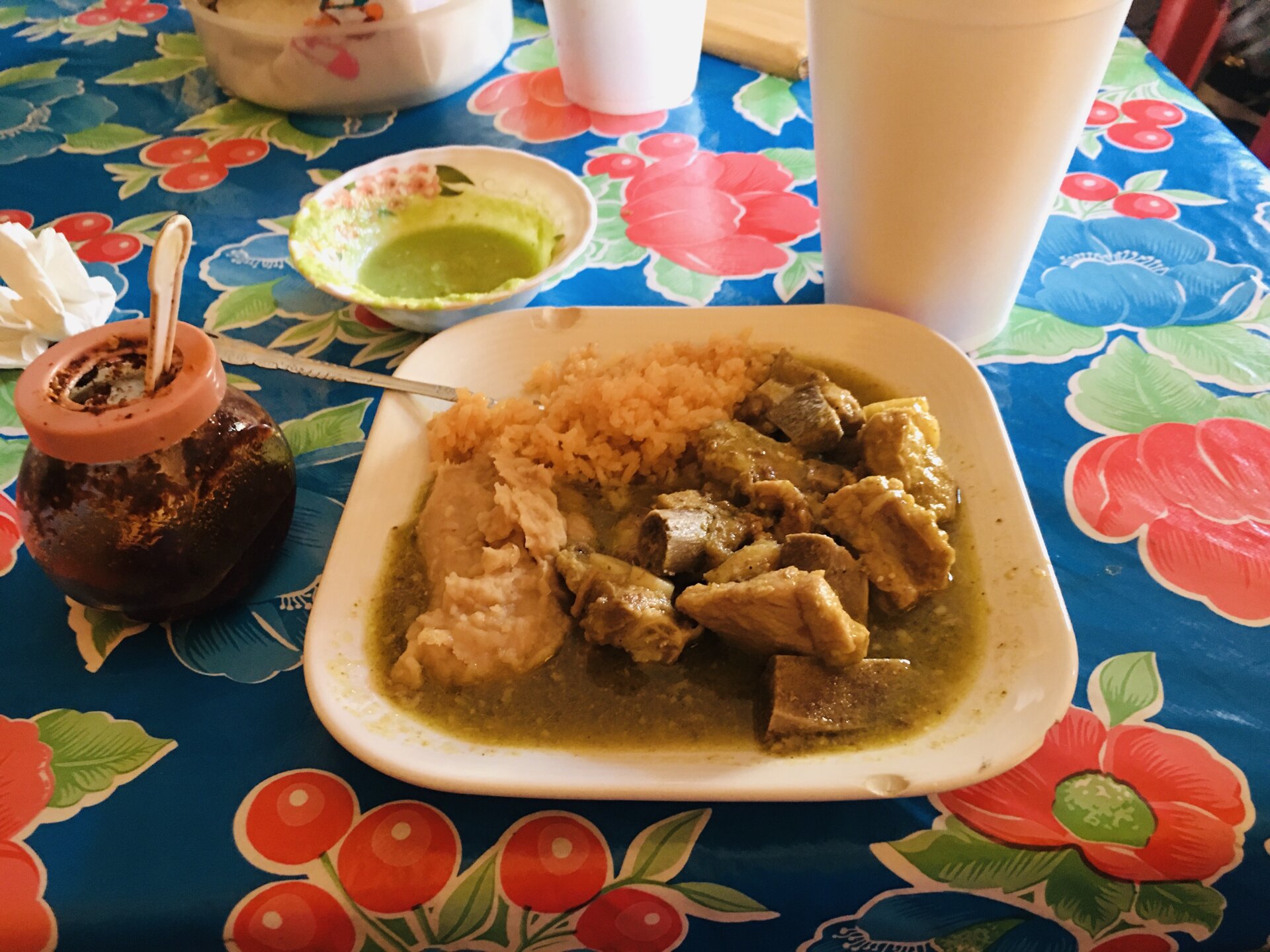 Loncheria Aylin is a little restaurant with only a couple seats, but it's where a little, cheerful family work together serving delicious, home-cooked meals that really make you feel like you’re in your own home, or at least at a Mexican mom’s or grandma’s. In fact, the place isn’t in an area that was built to be used as a restaurant; it’s the bottom floor of a house! I’m not sure, but the family might actually live above it, which makes a lot of sense. 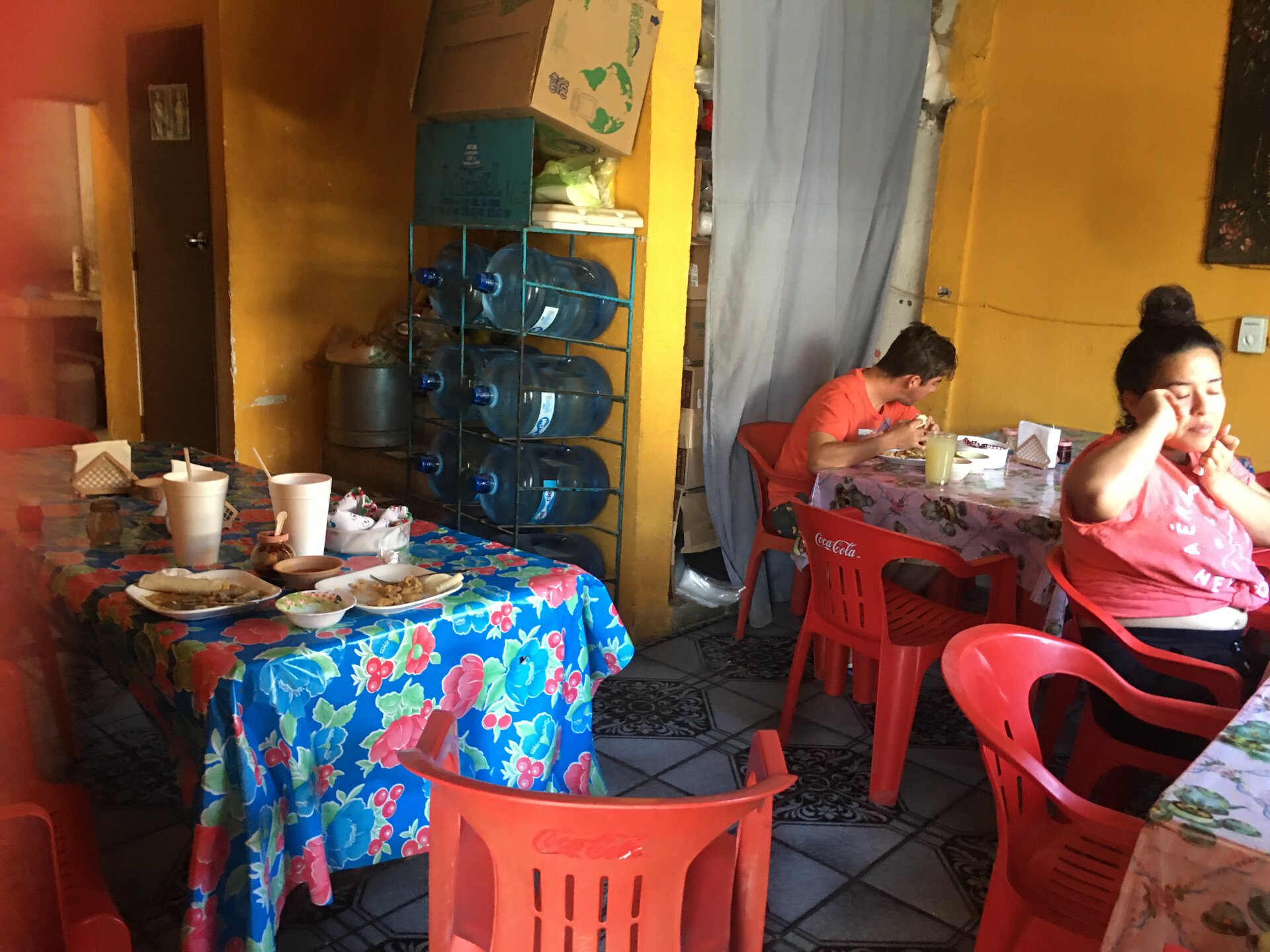