Fabulous Food At The Aramara Market 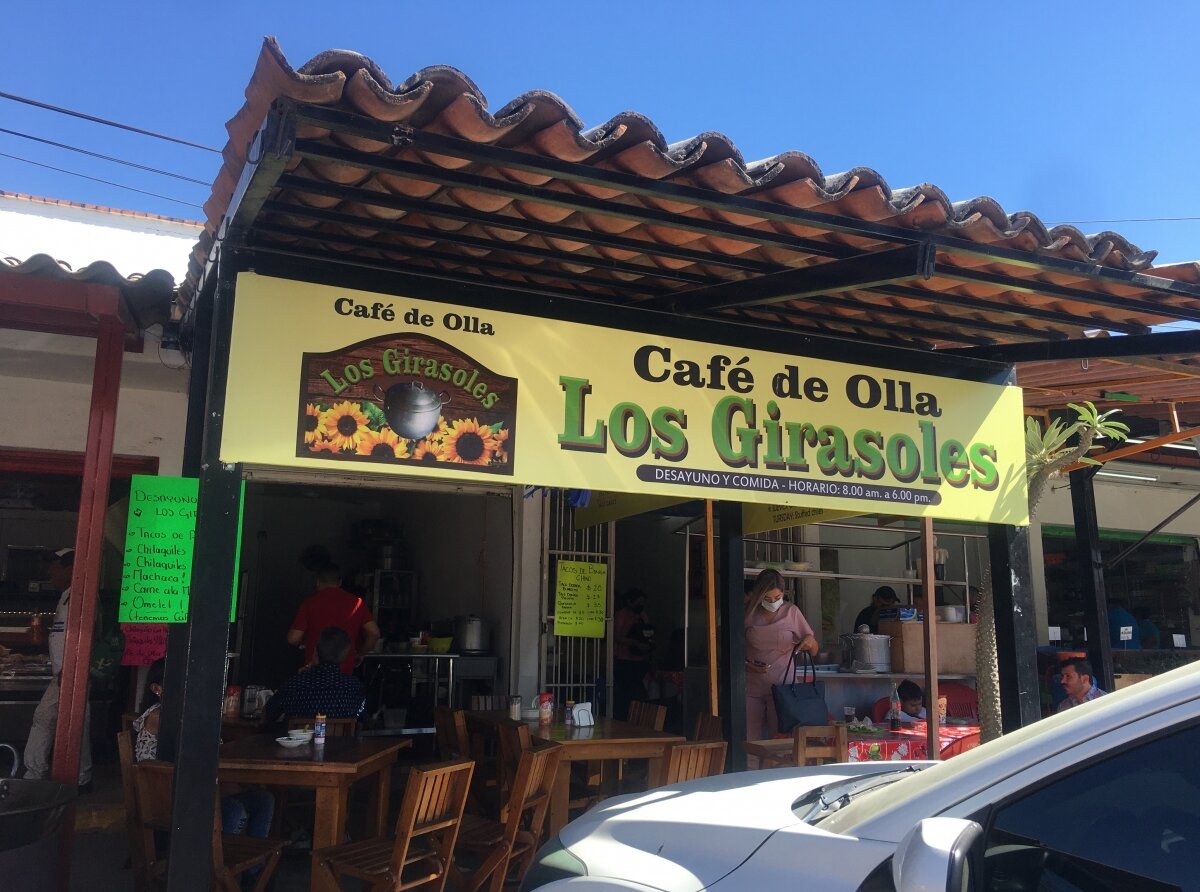 Today we went to a little Fonda that my dad used to always go to by the Aramara Market.

I don’t go out to town that often with my friends, but today my dad finally agreed to take me to Galerias with a friend. Though, of course we had to stop and eat first. I actually had found an interesting-looking place on Google Maps, but when we followed the directions, it wasn’t there, and we decided to go to a little place next door. The place is called Café de Olla Girasoles and is located on Oceano Pacifico 2004A in Palamar de Aramar. 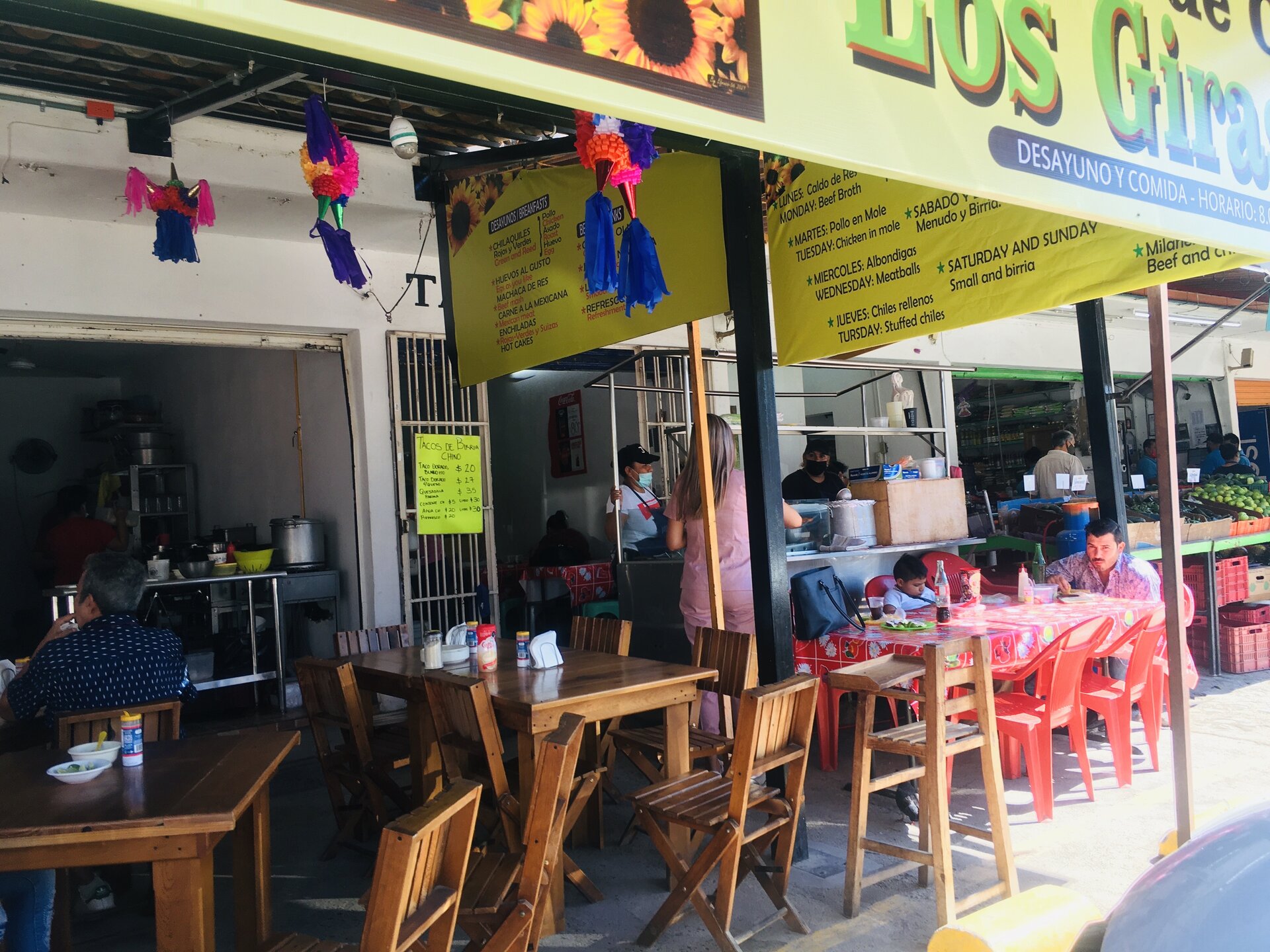 Café de Olla is a typical Mexican restaurant and they’ have one special meal for each day of the week. Today they had chiles rellenos and to drink they had guanabana water as well as the usual sodas. Though, aside from the daily menu they have some items that stay, such as fish and shrimp, chilaquiles, eggs, carne a la Mexicana, and more. 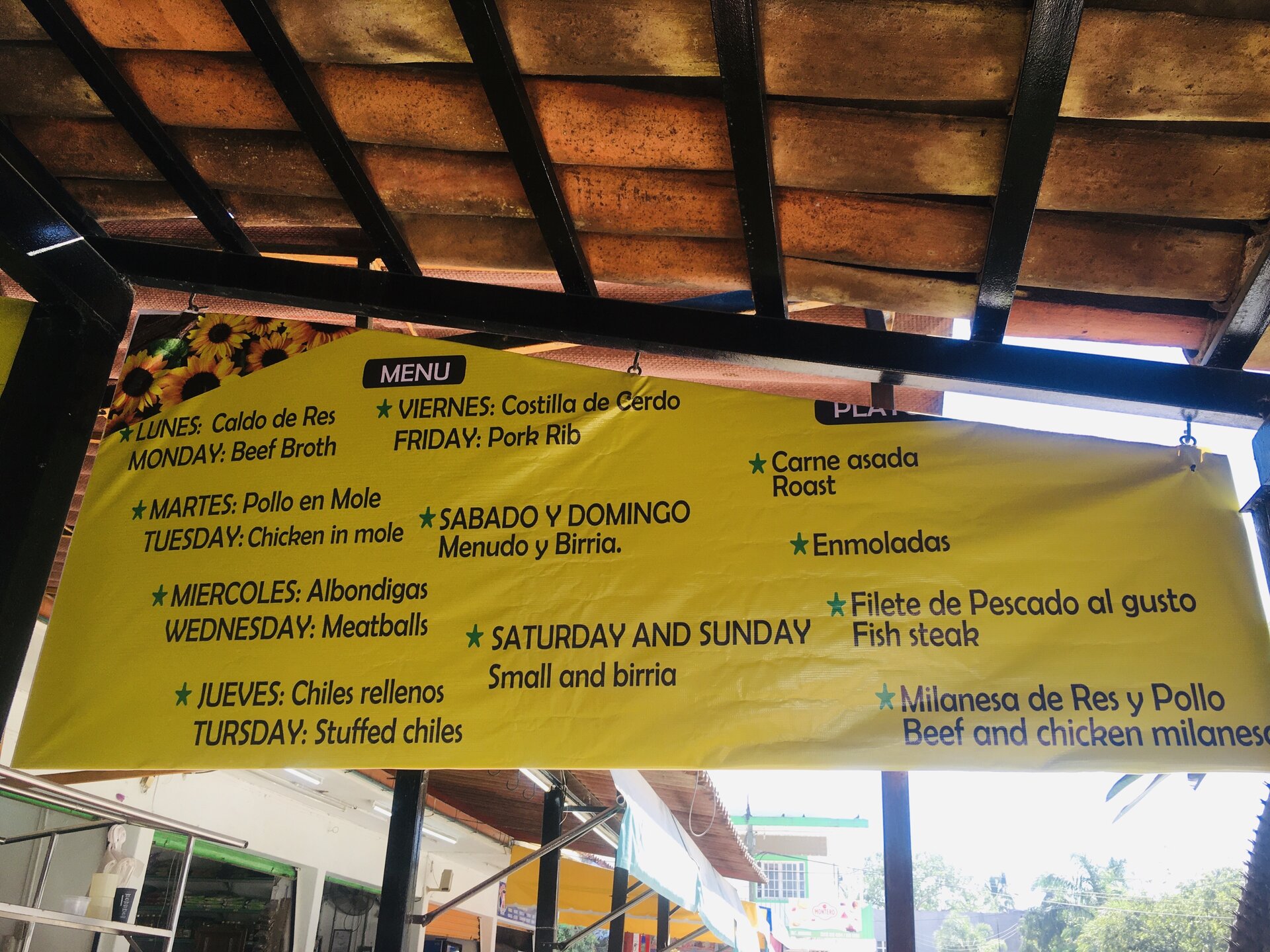 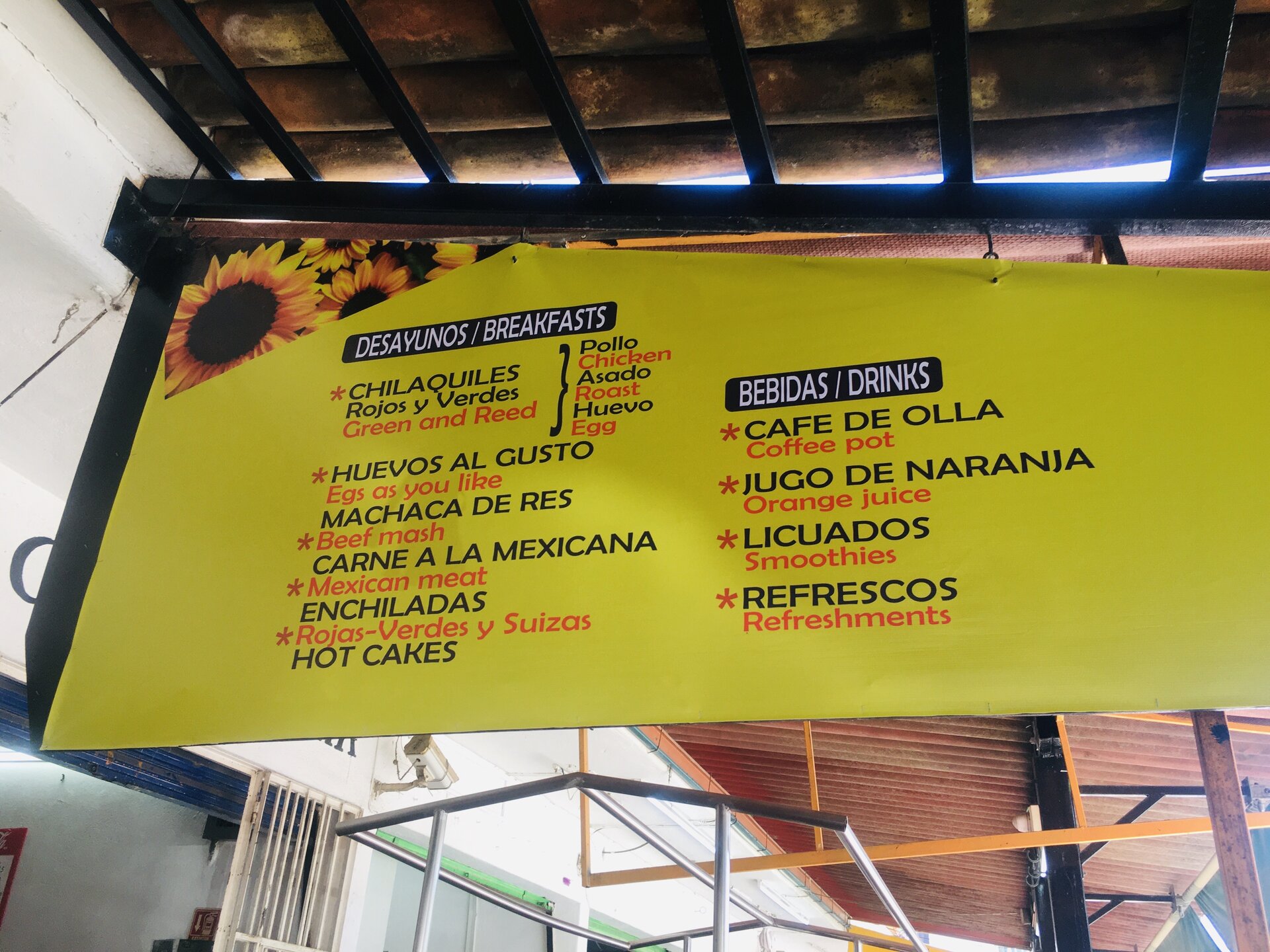 Both me and my friend, Diana got chiles rellenos, and we both really liked them. Diana is a huge fan of chiles rellenos, and even she said these are one of the better ones she’s tasted! They are really big chiles, and they’re quite green without having a super green flavor, so they’re kinda pretty. The breading on them is a little soggy, but hey that’s normal for chiles rellenos since they’re covered in juice, and the filling was panela cheese. Panela isn’t very good at melting, so it wasn’t melty, but either way it had really good flavor. At first I was concerned that it was old or that the chile wasn’t cooked enough to have melted cheese, but then I was told it was panela, and that made much more sense. But either way, the flavor was really good and the sauce added another layer of flavor that kind of pulled it all together. All in all, it was a great plate of food!! 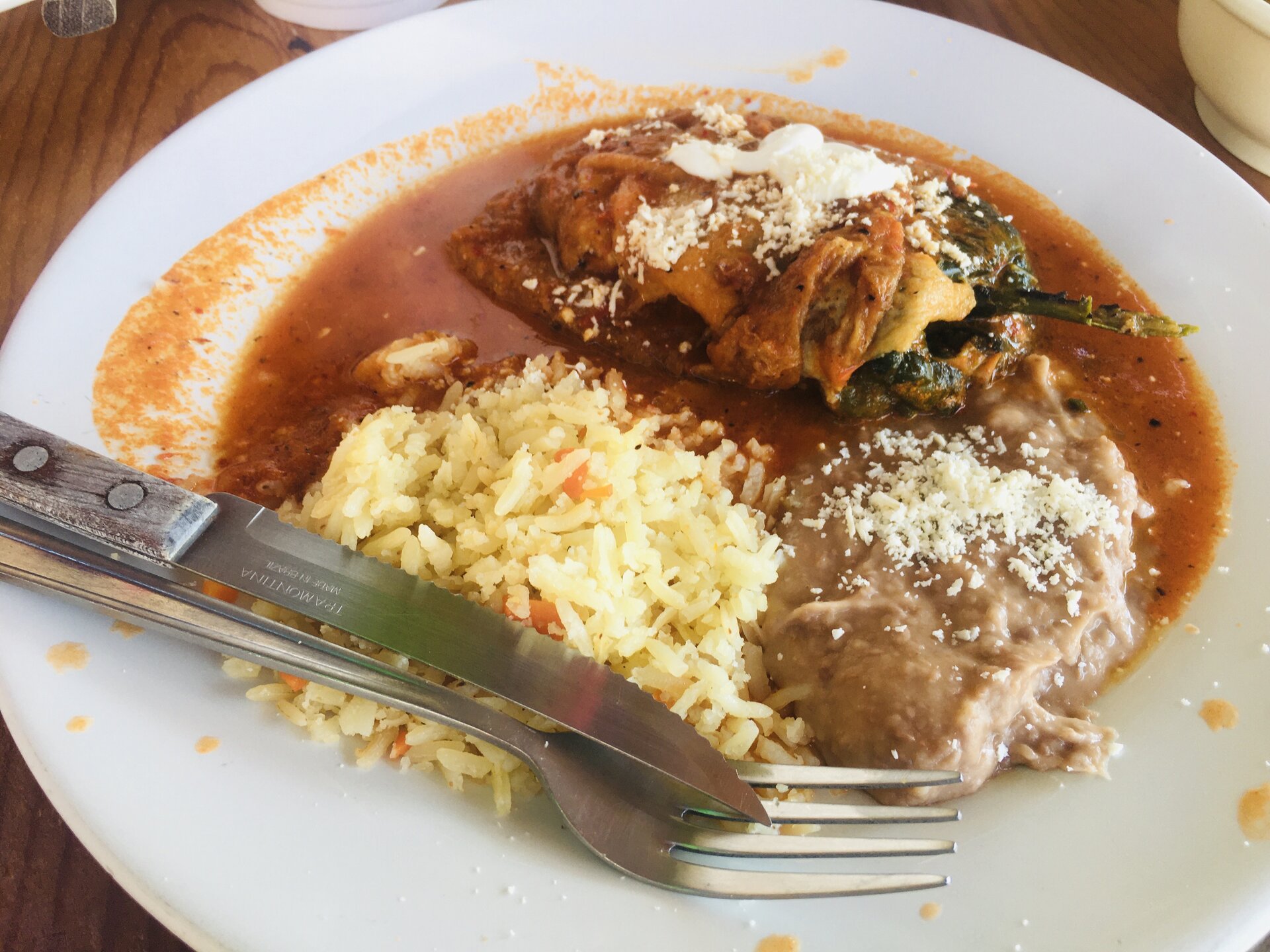 My dad got the carne a la Mexicana, and actually as we were waiting on our food we got to see the ladies preparing the sauce for his dish. It had tomatoes, onion, and garlic, which were thrown in the blender with some water, and then it was dumped into a hot saucepan, which we heard sizzle! We also saw her cook the carne asada, chop it up, mix it up with the sauce, and then add some more tomatoes and onion, though finely shopped instead of blended that time. When they brought us the palte my dad wanted to immediately start digging into it, and even poured most the salsa we were given on it before I could snap a picture, but I of course ended up getting a pic. He says that if y you’ve ever had stewed tomatoes, that’s what it tastes like, though I’m not sure what that is. Apparently it has a fresher flavor than tomato sauce that gets cooked for hours. Also, he said that the meat was tender and had good meat-y flavor, but some rice would’ve pulled the dish together a little better. Though, it was still really good and my dad really liked his food. 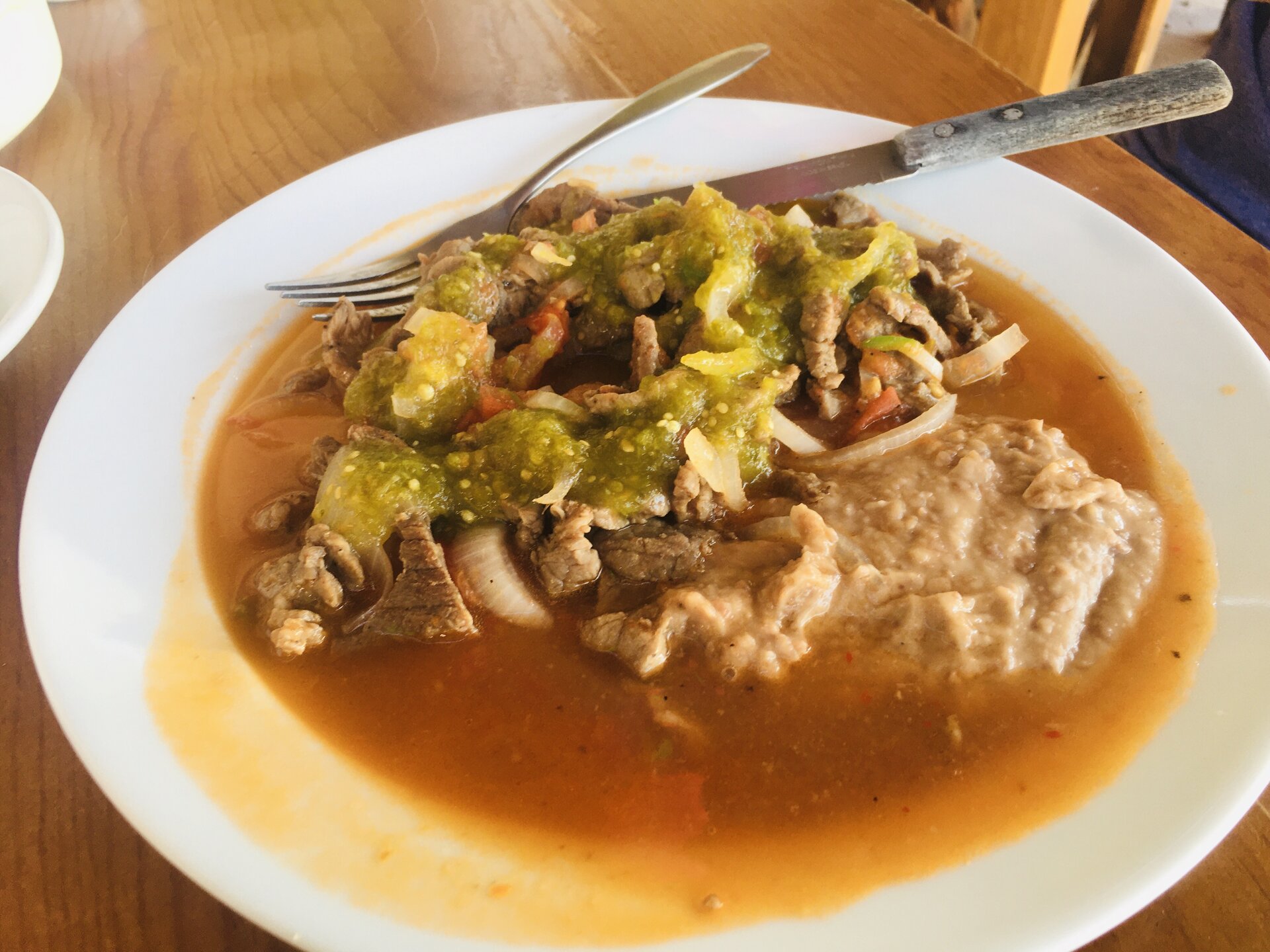 Café de Olla is a great place to visit and have some really good food, but not only that it is also located right by the Aramara market, so once you’re done having a lovely lunch or breakfast you can walk around and shop for all kinds of produce and foods.  But, even if you don’t need any shopping, I still totally recommend the delicious food! 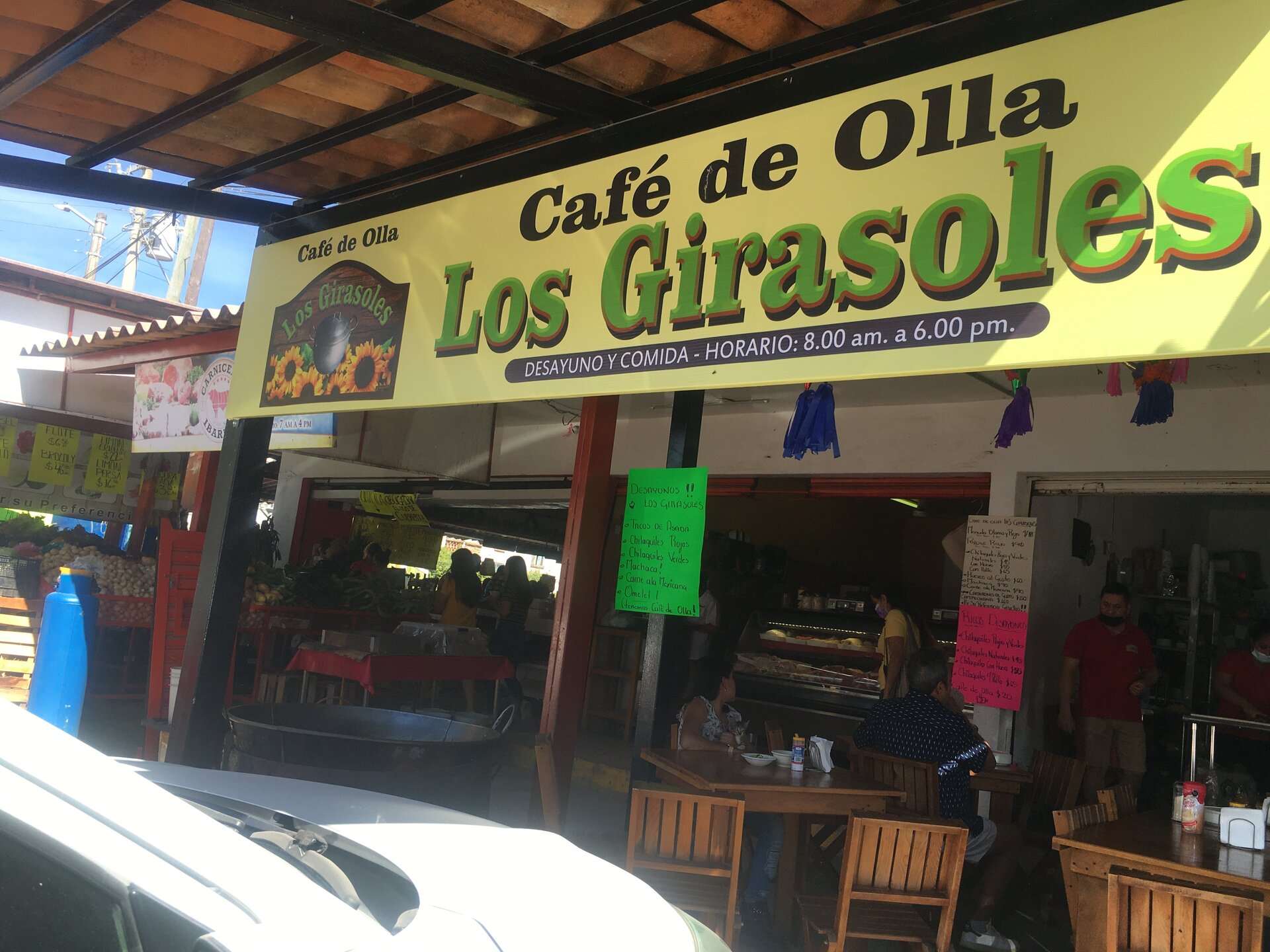