The Most Sophisticated Chicken Sandwich I've Ever Had At Algo Bueno 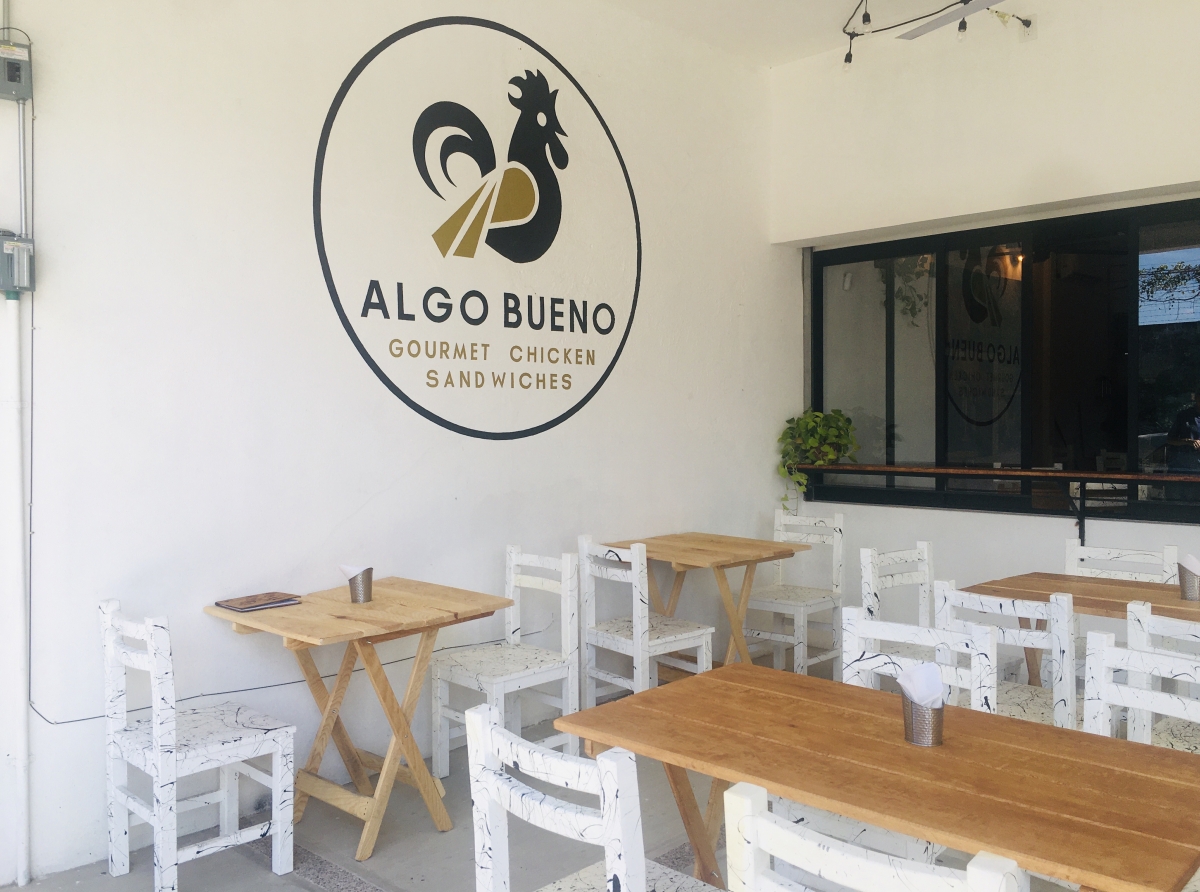 Today we went to a new little restaurant and we got gourmet fried chicken sandwiches.

My dad loves Mexican food, and he could eat rice and beans with salsa and tortillas three times a day, and sometimes he does, but every so often I need a change. And, then today while my dad was browsing through Facebook he saw a picture of this really good-looking fried chicken sandwich, so of course he looked into it. Turns out, there’s a kind of new restaurant here in Puerto Vallarta that serve those sandwiches, and their prices are actually more than fair! So basically, this was a perfect place to go to and try, since I wanted something other than Mexican. The place is called Algo  Bueno, which means “something good,” and is located on Calle Roma 126 in Col. Díaz Ordaz. 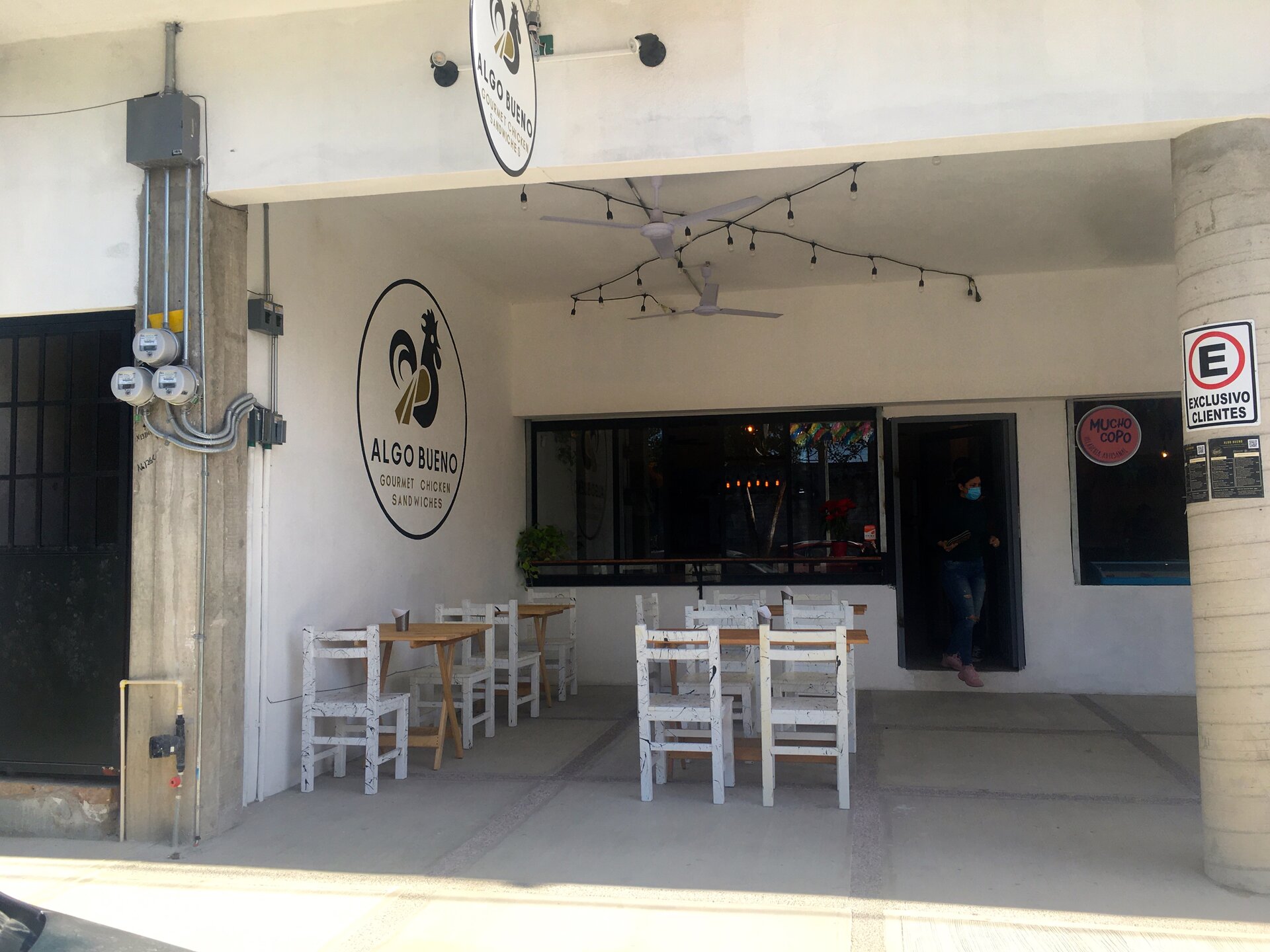 The owner and cook of Algo Bueno, Gordon Von, really knows what he’s doing, and he even has a culinary background. He studied French-style cooking as well as others at Johnson & Wales University and graduated with a degree in culinary arts, and he’s also worked in restaurants before. So, with not only knowledge but also experience he’s able to create something as simple as a chicken sandwich and turn it into a mixture of robust flavors that gives the feeling and has the looks of a gourmet meal. But, the sandwiches aren’t the only things he serves. There are also other meals, which include a house salad and a red lentil soup, and there are a couple sides such as a 5-cheese mac and cheese, hand cut fries, a Cesar salad, and cole slaw. To drink there are sodas and flavored lemonades, made with real yellow lemons instead of limes, and Gordon told us he is working on getting a liquor license to start serving beer and wines soon. 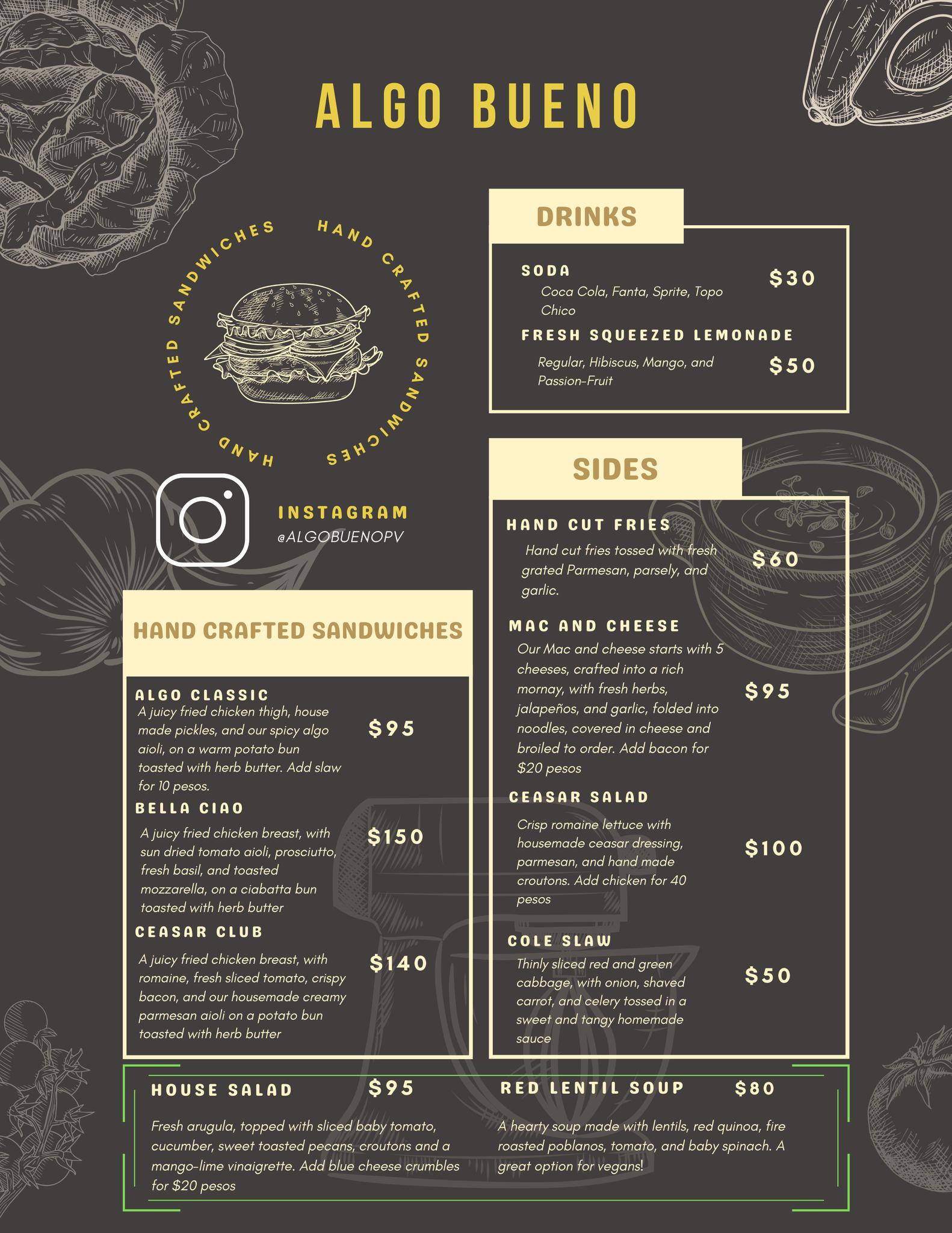 There are three different chicken sandwiches, one with a chicken thigh and the other two with chicken breasts. We didn’t want to get the same kind, so I let my dad choose first since I don’t have a preference between thighs or breasts, but I ended getting the Bella Ciao sandwich, which has breast meat, and I got hibiscus lemonade to drink. We also ordered some fries to share, as well as the mac and cheese, but we were so full we weren’t able to eat any of it, and we took it home untouched.  The fries are perfectly cooked and seasoned, but they don’t only have some salt and pepper tossed on them, but they also have parsley and garlic, which gives them a mild yet amazing flavor of spices and herbs. Also, they had parmesan cheese sprinkled on top, which is another example of how something so ordinary like fries are turned just a little bit more special at Algo Bueno. Like I said, we didn’t have any of the mac and cheese at the restaurant, but of course we had some a little later after we got home. It was of course very cheesy, but it wasn’t too cheesy, or too rich, it was actually really nice. It also had some fresh herbs, that weren’t overpowering, so it was hard to tell what they were, and tiny chunks of jalapeño that added a touch of crispness and fieriness. And, one more thing, the noodles weren’t macaroni, they were rotini, which in me and my dad’s opinion is much better noodle for dishes like a runny mac and cheese. 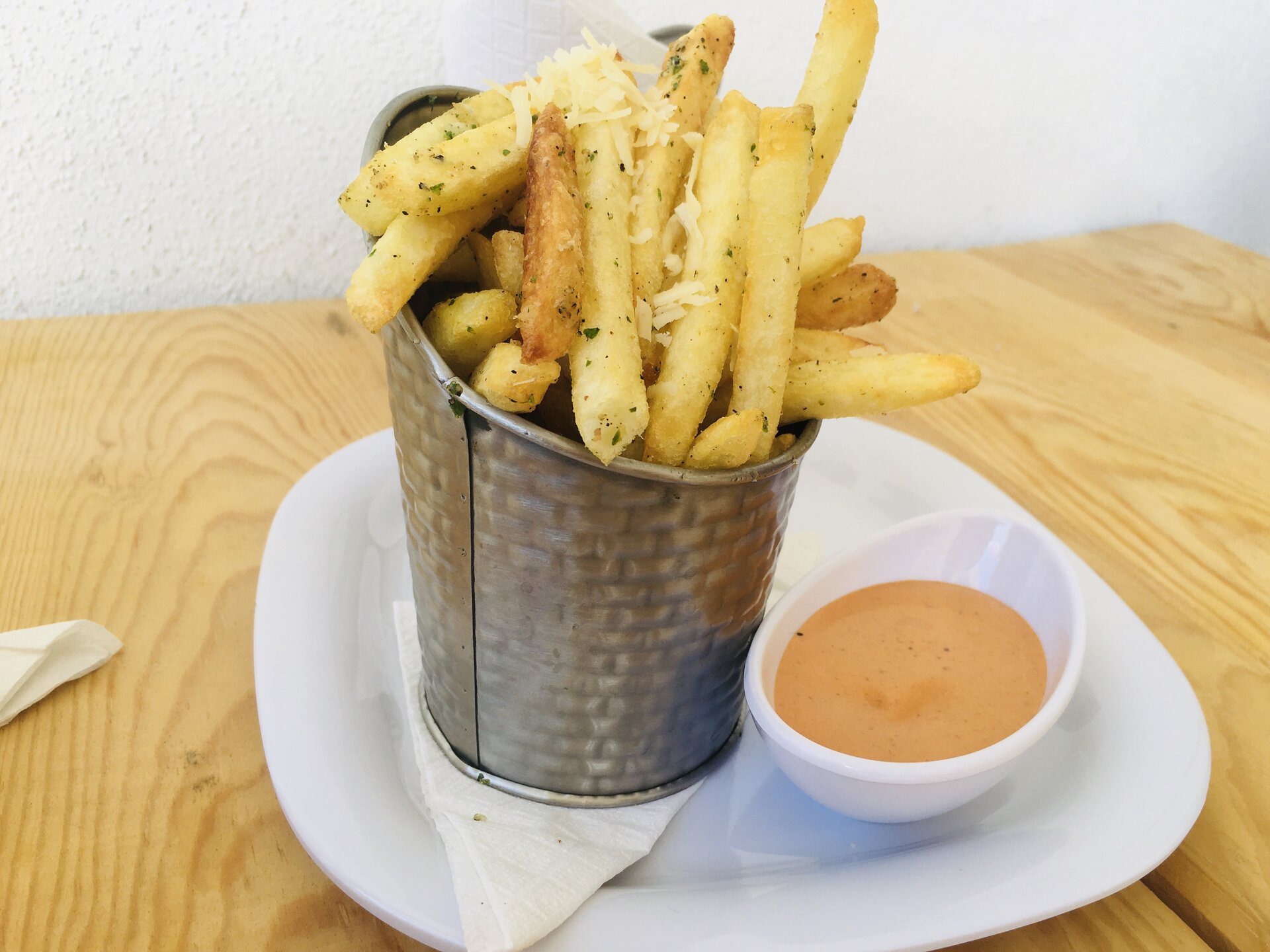 The Bella Ciao sandwich contains chicken breast, sun dried tomato aioli, prosciutto, fresh basil, and melty mozzarella cheese, which may sound a little weird for a fried chicken sandwich, but isn’t just any sandwich, it’s a gourmet chicken sandwich. Now, many people say that the chicken breast has much less flavorful than the thighs, and is also much drier, which is true, but the chicken on the sandwich I got was very succulent and moist! And the crust on the chicken was properly seasoned and very good as well! It also wasn’t soggy by any means, even though the chicken was, once again, very moist. The prosciutto on the other hand was quite dry, though in a good way, and was very salty, but it went incredible with the unsalted, yet mature cheese, and the fresh and cool basil leaves. All in all everything was very good quality, and it came together into an amazing sandwich that I can’t wait to order again. 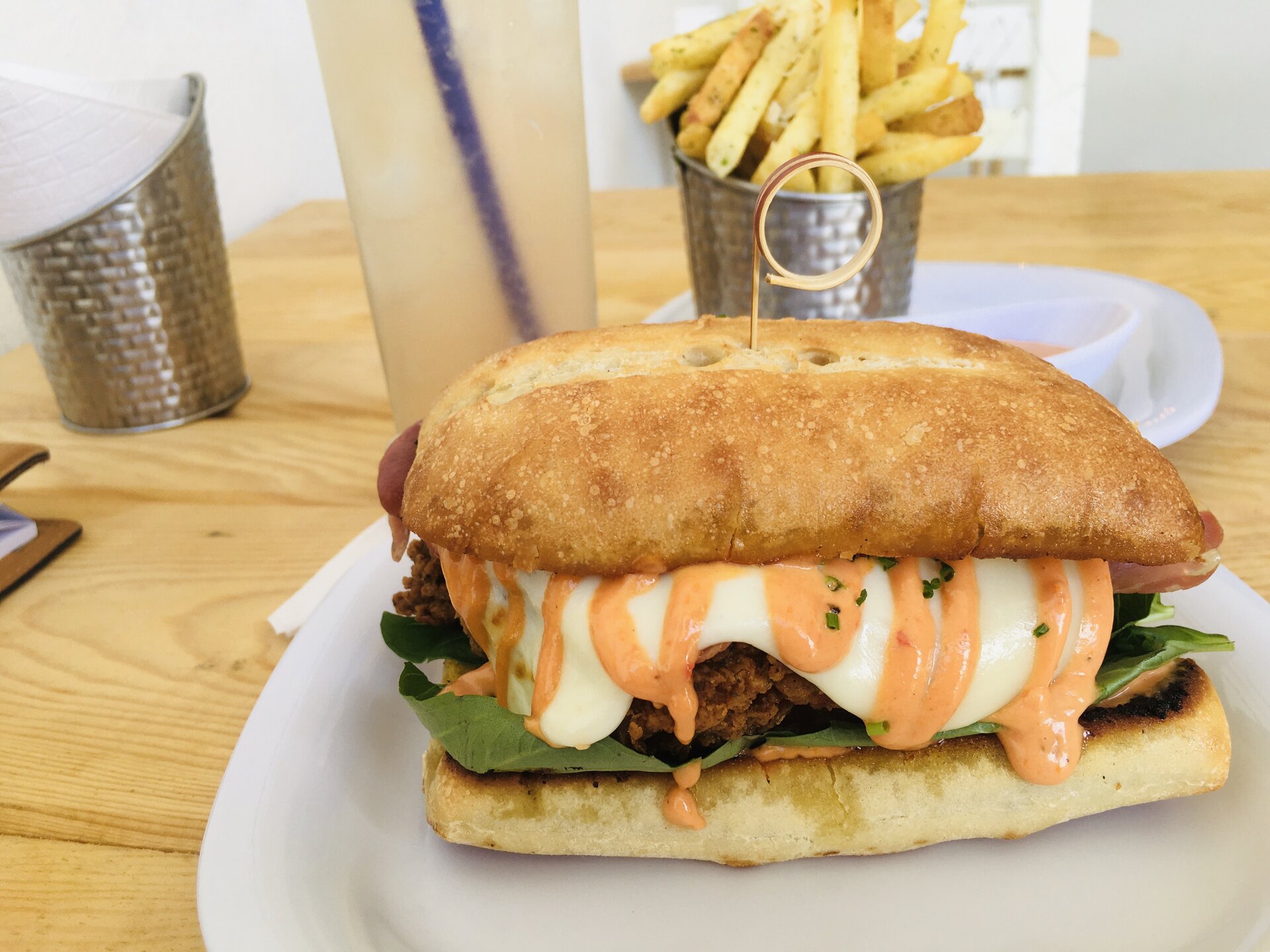 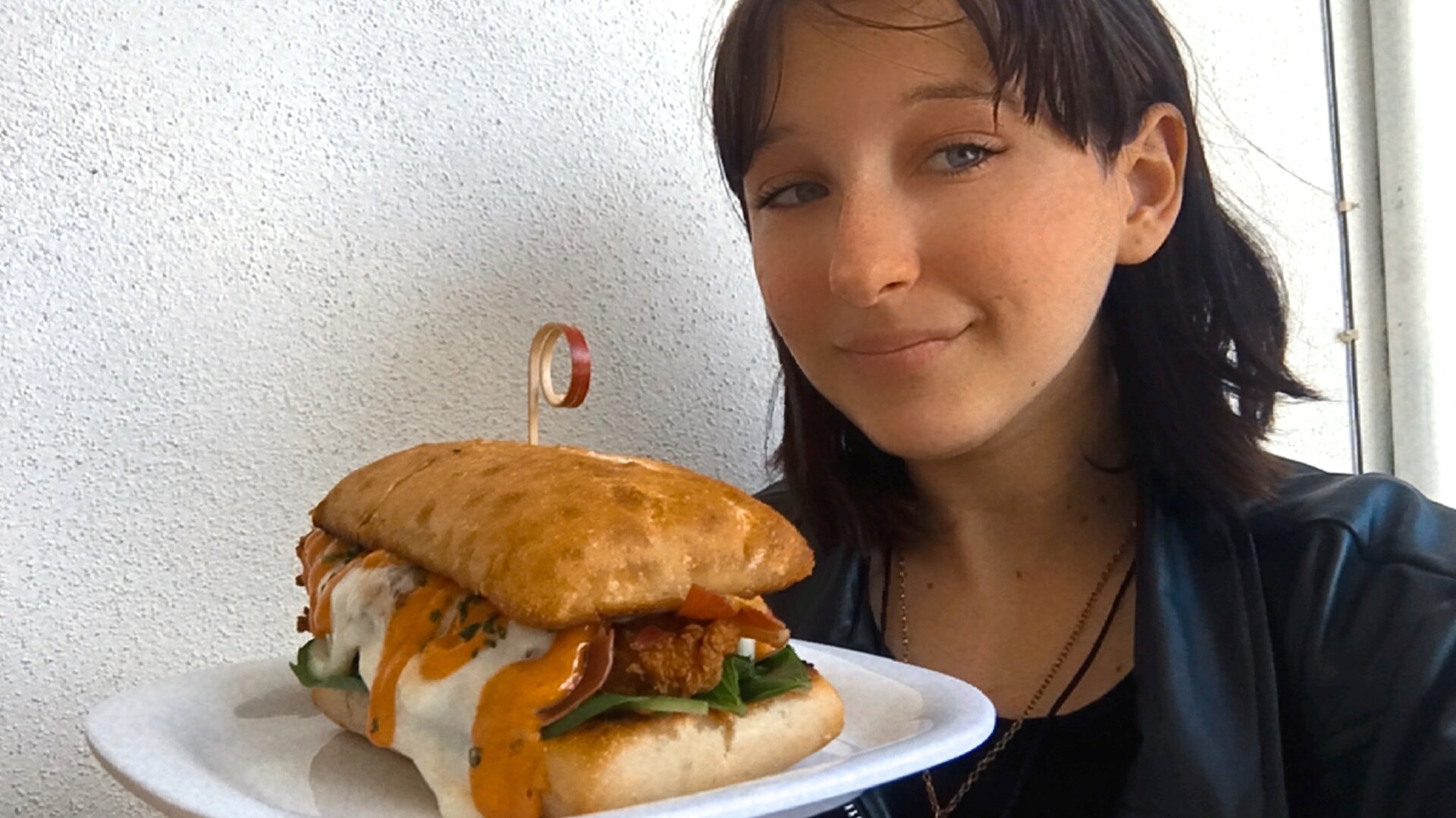 Like I said before, my dad ordered before me, and he got the Algo Classic sandwich, which is the only one with thigh meat, and therefore he though it would be the best. And it turned out to be very good, but not only that, it was extremely pretty! And to drink, he got a passion fruit lemonade. The sandwich includes, of course, a chicken thigh, but also house made pickles and spicy algo aioli. And the first thing my dad noticed about it was how some of pickles were purposely placed half-way off the sandwich, and how the sauce wasn’t poured on but drizzled, and in a way that it too was visible even if you didn’t open it or take a bite. Put short, the sandwich was constructed to look pretty, and my dad immediately said that whoever put it together had to have gone to culinary school. Which, he was right about! Then he noticed the artisanal bread, which had sesame seeds and I think pumpkin seeds, so it had a faint nuttiness to it. And finally, he took big bite of his sandwich, and what did he say? He said that whoever created this sandwich was from California, and more specifically from San Francisco or Napa Valley. And, once again, he was right!! After talking with Gordon later, he said he moved here from San Francisco! But, back to the sandwich. The chicken and aioli went really good together, and the pickles wouldn’t have if they were sweet or dill, but they were home made bread and butter pickles, so they went perfectly with the rest of the sandwich. Overall, the flavors and complex, but they perfectly fit together and formed another perfect sandwich. 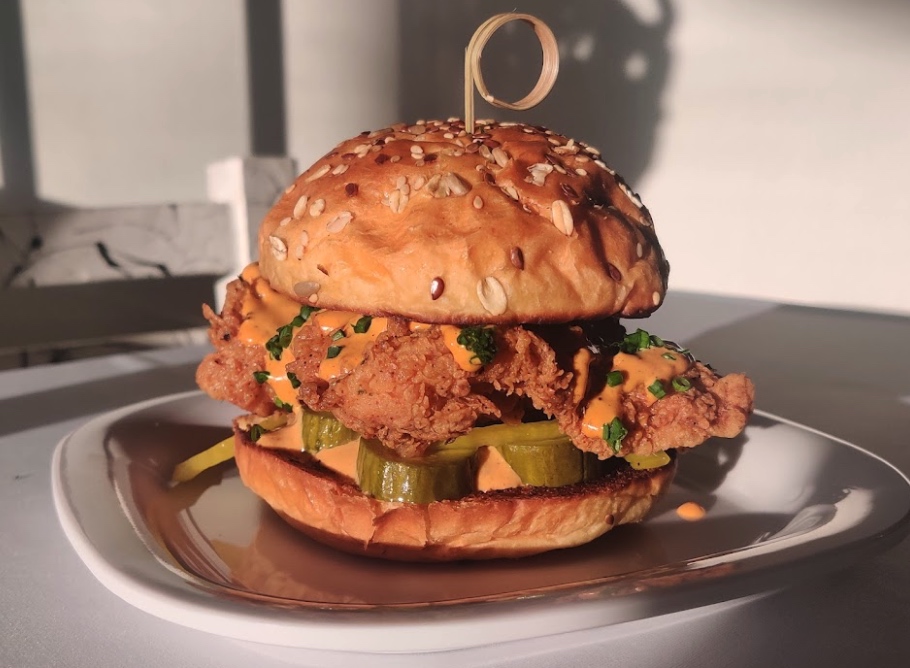 Algo Bueno is a pretty new restaurant, but it’s a must go-to! Not only is their food so sophisticated and perfectly seasoned, but the environment and ambience of the place is very welcoming and nice. Also, the waiter is quite kind, and he speaks perfect English, as he had lived in California for many years. And one more thing I should mention, it’s actually only a couple minutes away from the beach and many condos and resorts, so if you’re going to or coming from any of those, definitely stop by to try one of the amazing sandwiches and meet Gordon and his team! His business partner and friend is Alex Collins, who moved here with Gordon to start the restaurant. His friend's girlfriend, Carla Magana, is also the general manager, and her dad, Benjamin, did all the fabrication and construction. 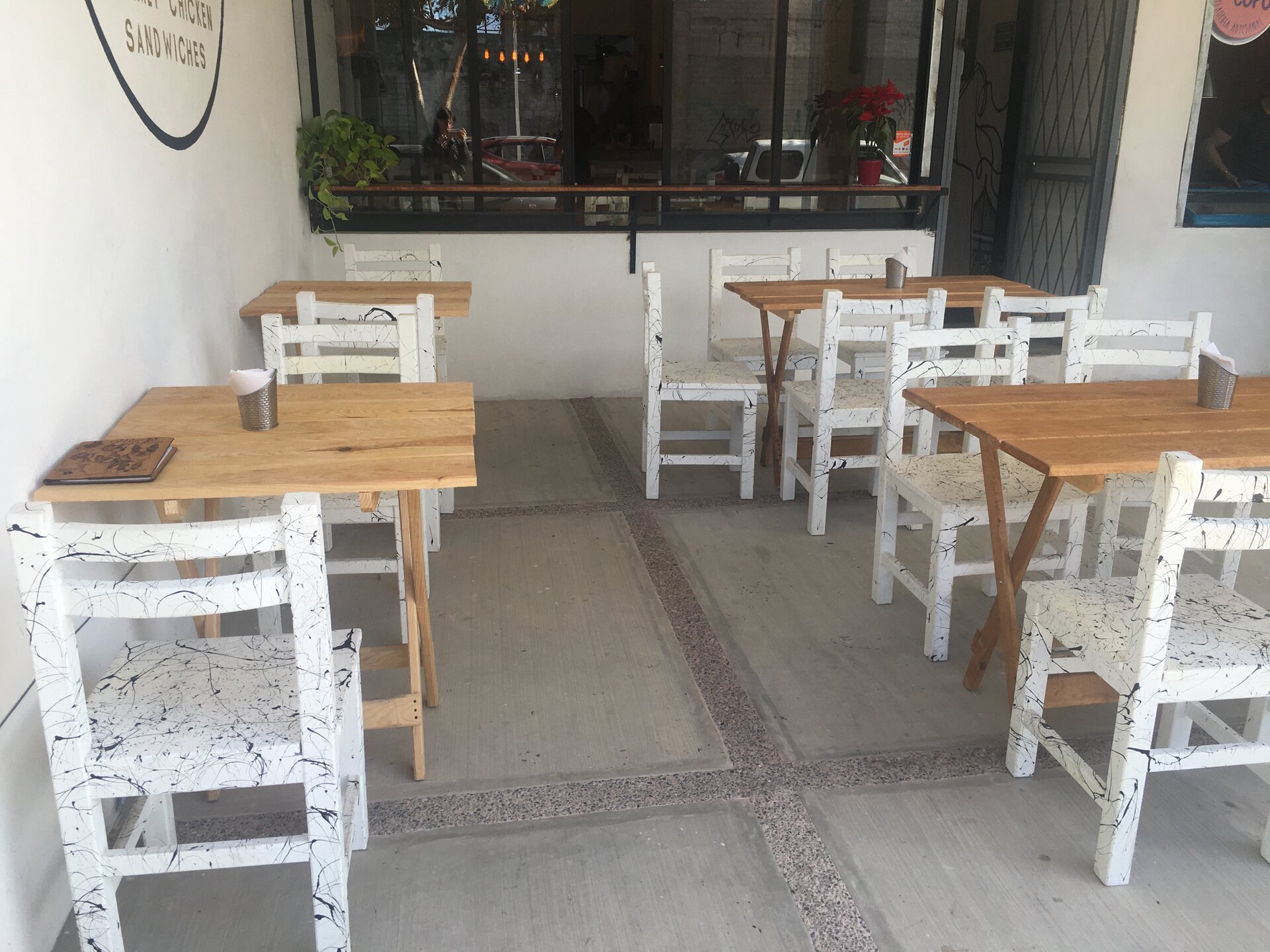 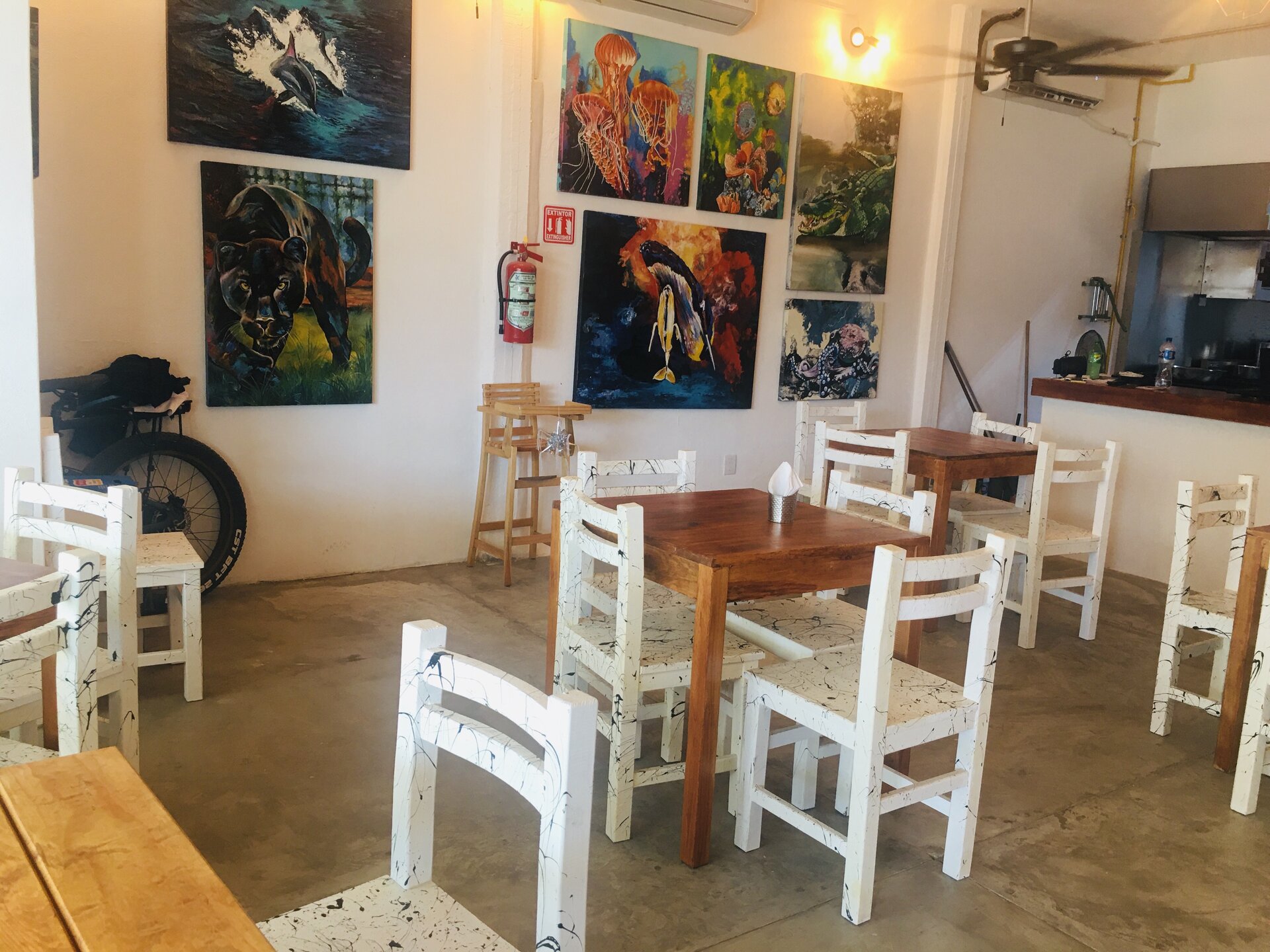 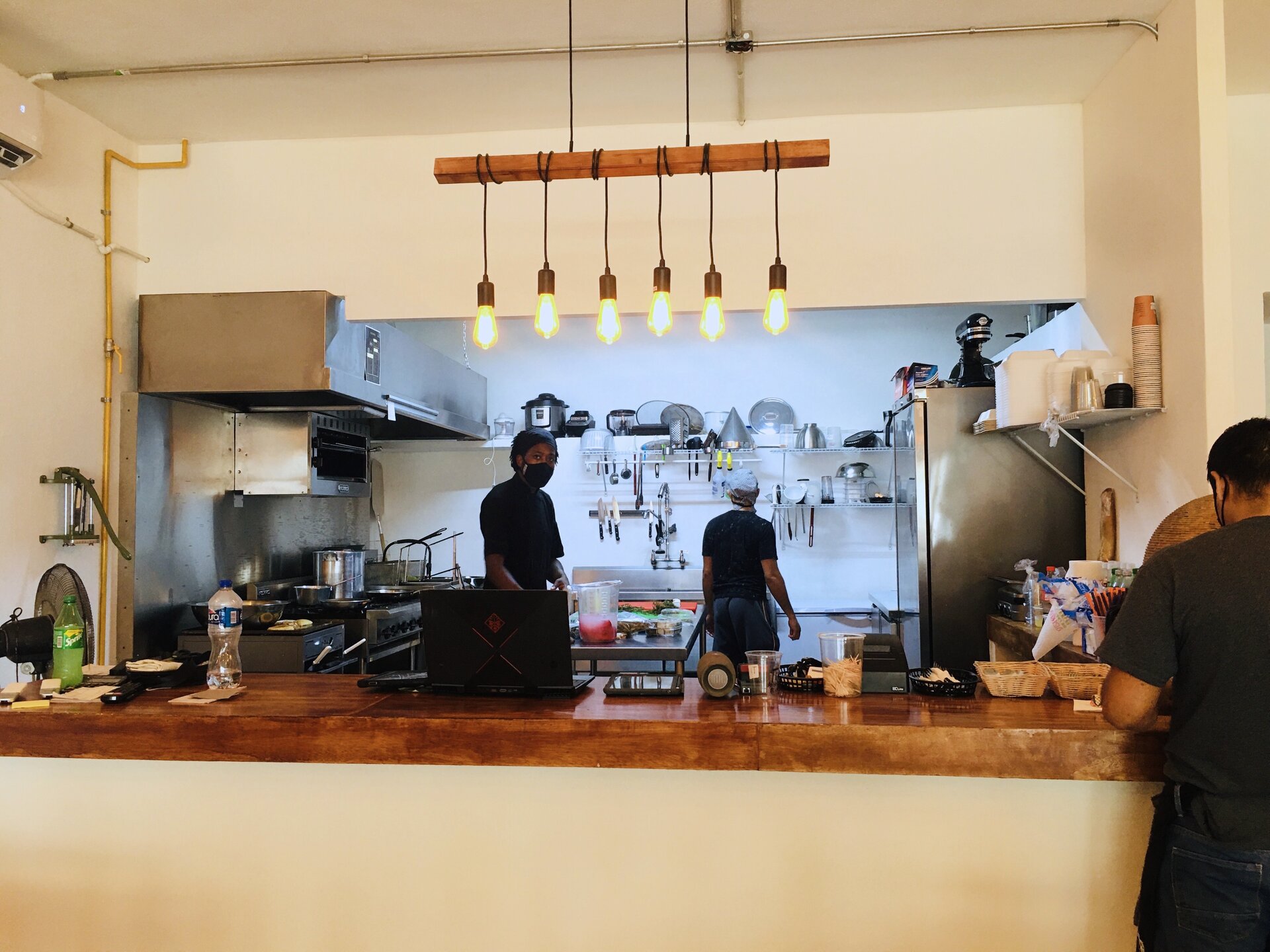