A Surprising Lunch With John Benus 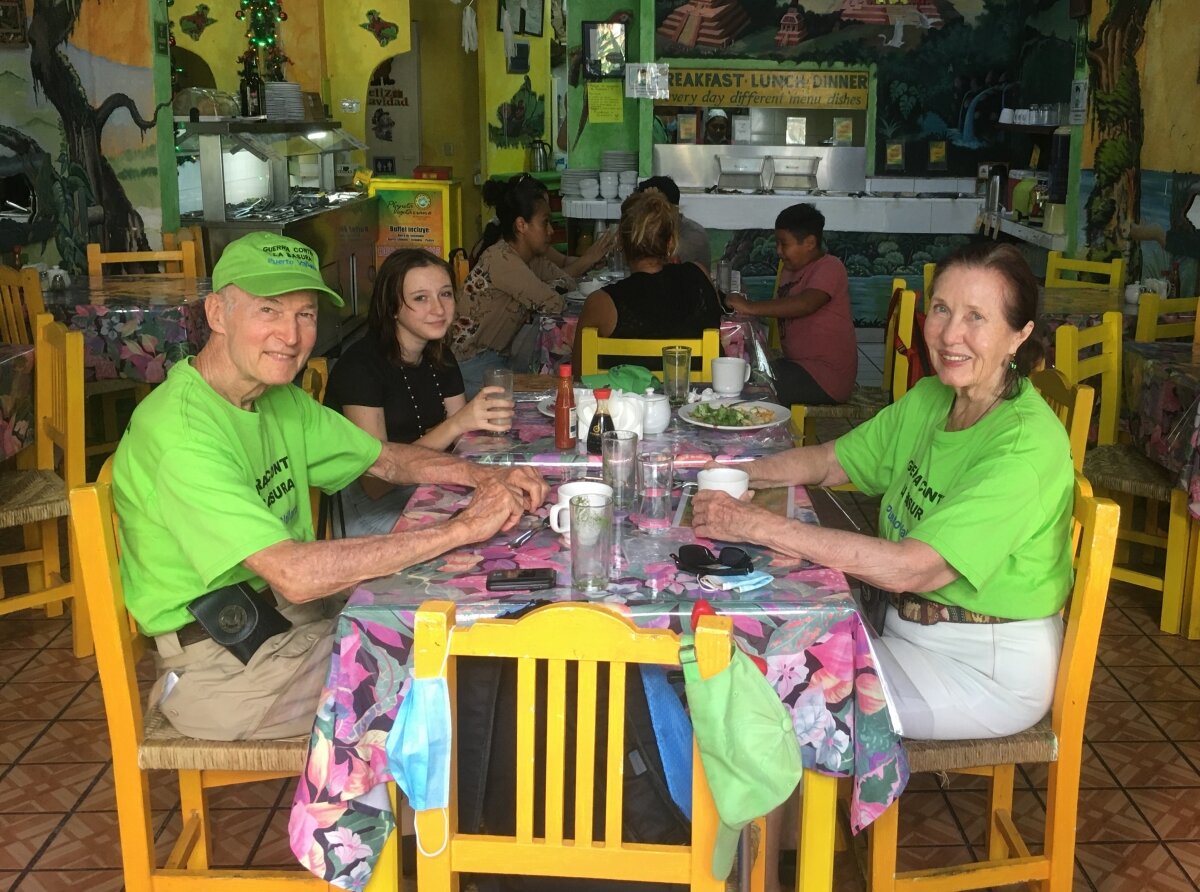 A couple days ago John Benus invited us to lunch, and boy did this place surprise me and my dad!!

So, I’ve talked about John Benus before, and he’s written many articles about his war against the trash, but even through I consider him a friend I’ve never met him in person. So, a couple days ago he invited me and my dad for lunch, but the thing is that he chose a vegan place. And, we have gone to a couple different vegan/vegetarian places, but, let’s just say we came back hungry every time. So as we were driving to the place we didn’t have high hopes, and were even paying attention to if our favorite taco stand was open so we could stop by on our way back. But, boy were we proven wrong! The place is called Planeta Vegetariano, and is located on Iturbide 270, Projecto Escola in EL Centro. It’s been open for over 25 years, and John has been visiting for over 20, so he’s actually friends with the employees there, and knows them quite well. 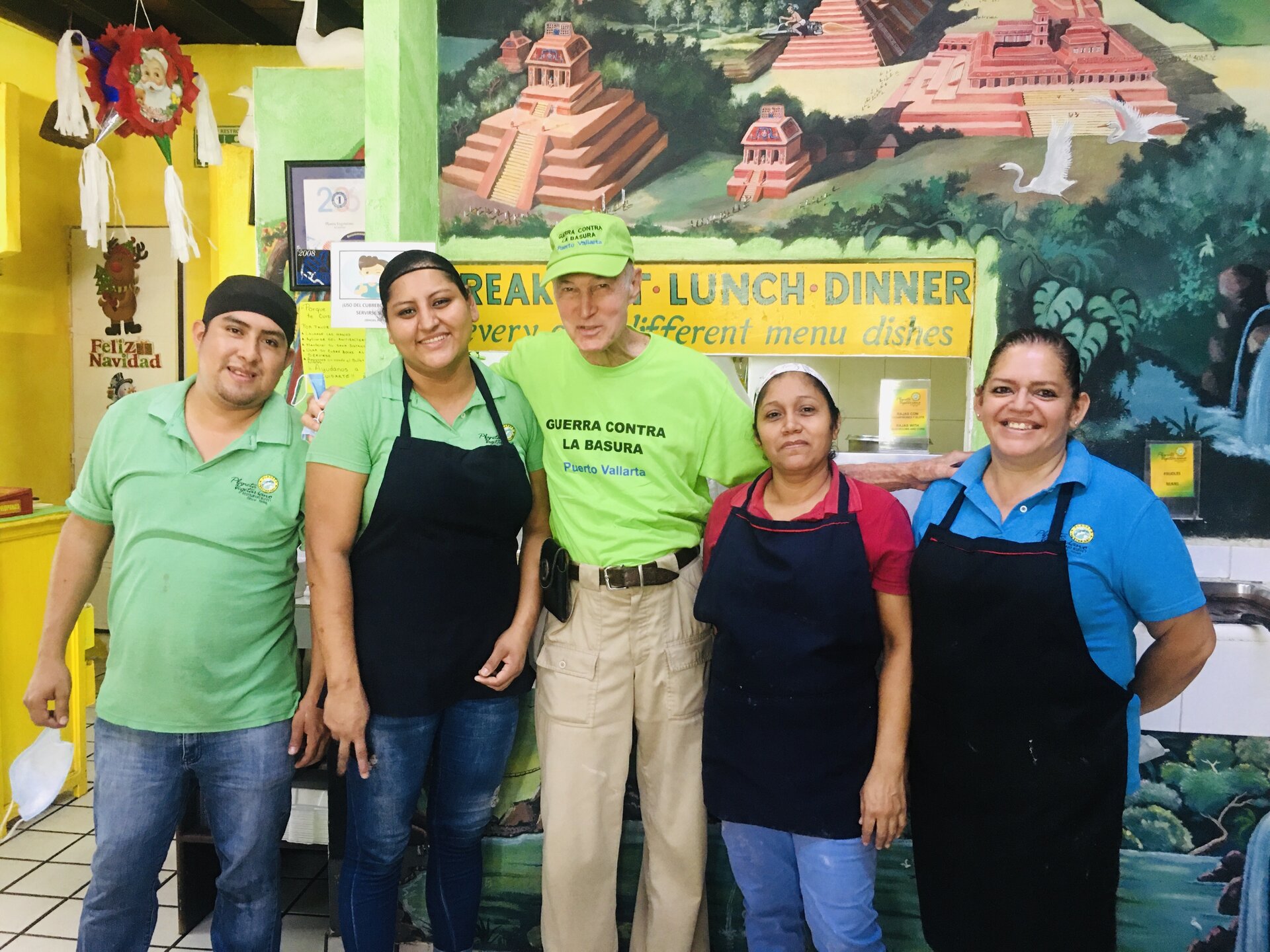 Planeta Vegetariano isn’t some super healthy all green place, and actually if it wasn’t for the name I wouldn’t even be able to tell if it was vegetarian or not. The flavors are somehow all there, while still being 100% meat, dairy, and egg free. Also, what they do is an 170 peso all-you-can-eat buffet that has quite a few different main meal options as well as a soup, a giant salad bar, flavored waters, natural water, and coffee, as well as one dessert you can ask for when your done with your meal, or whenever you like for that matter. The day we went they had cream of vegetable soup, al pastor tofu, rajas in tomato gravy, potato casserole, both yellow and white rice, black refried beans, and for dessert dense chocolate cake. Then there was the salad bar, and it was way too full of different vegetables, fruits, dressings, and even some nuts to describe it all. 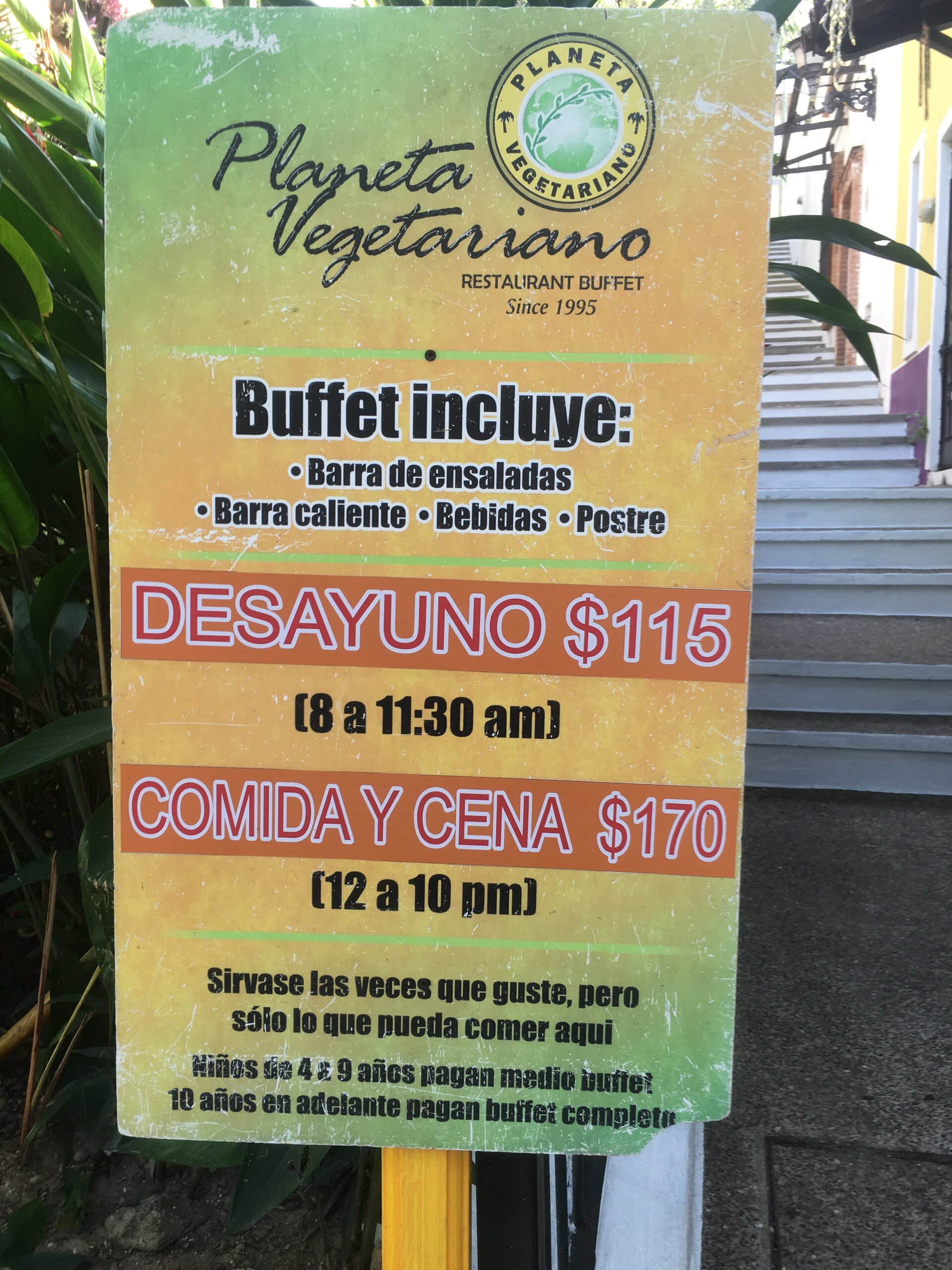 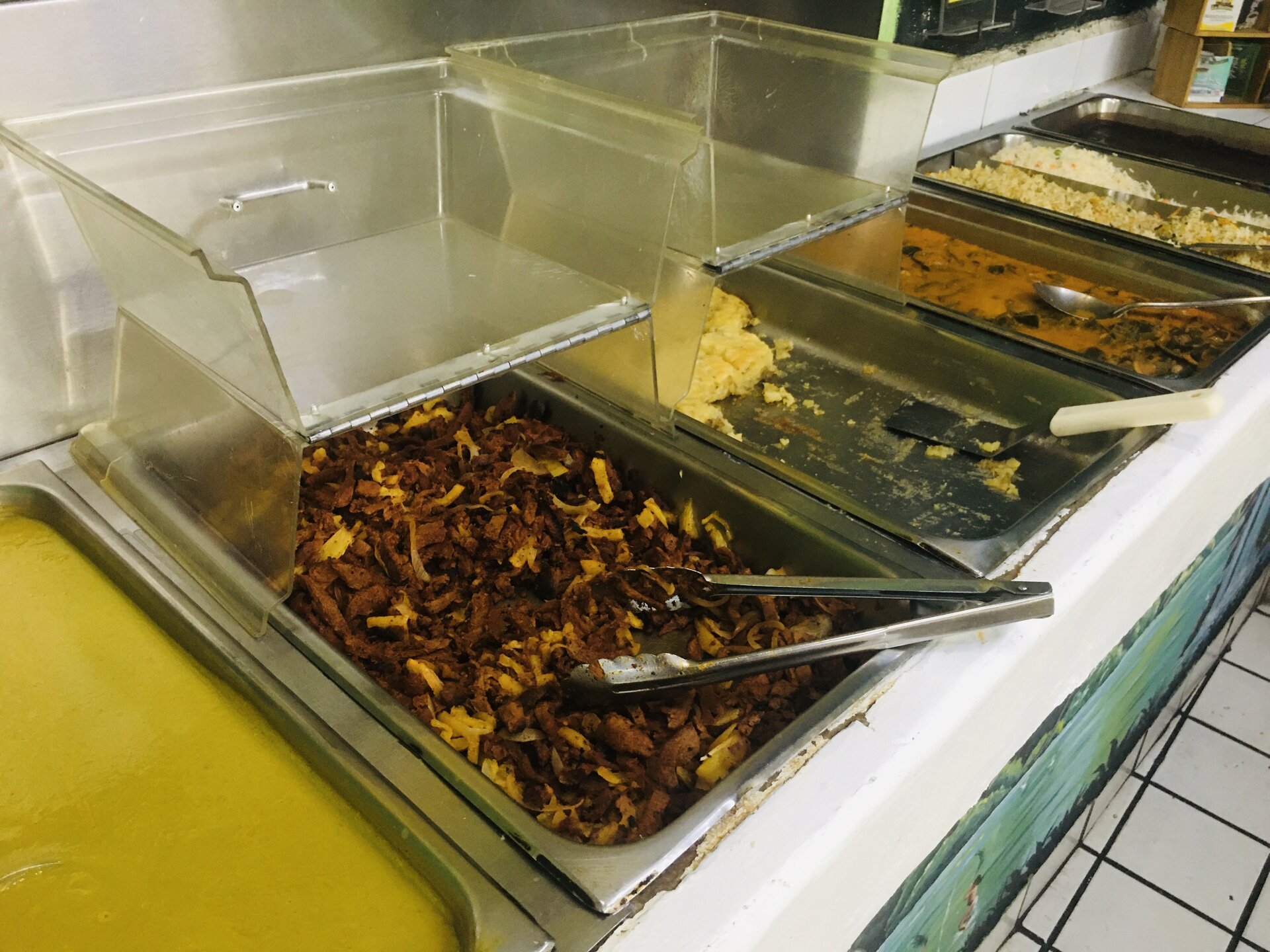 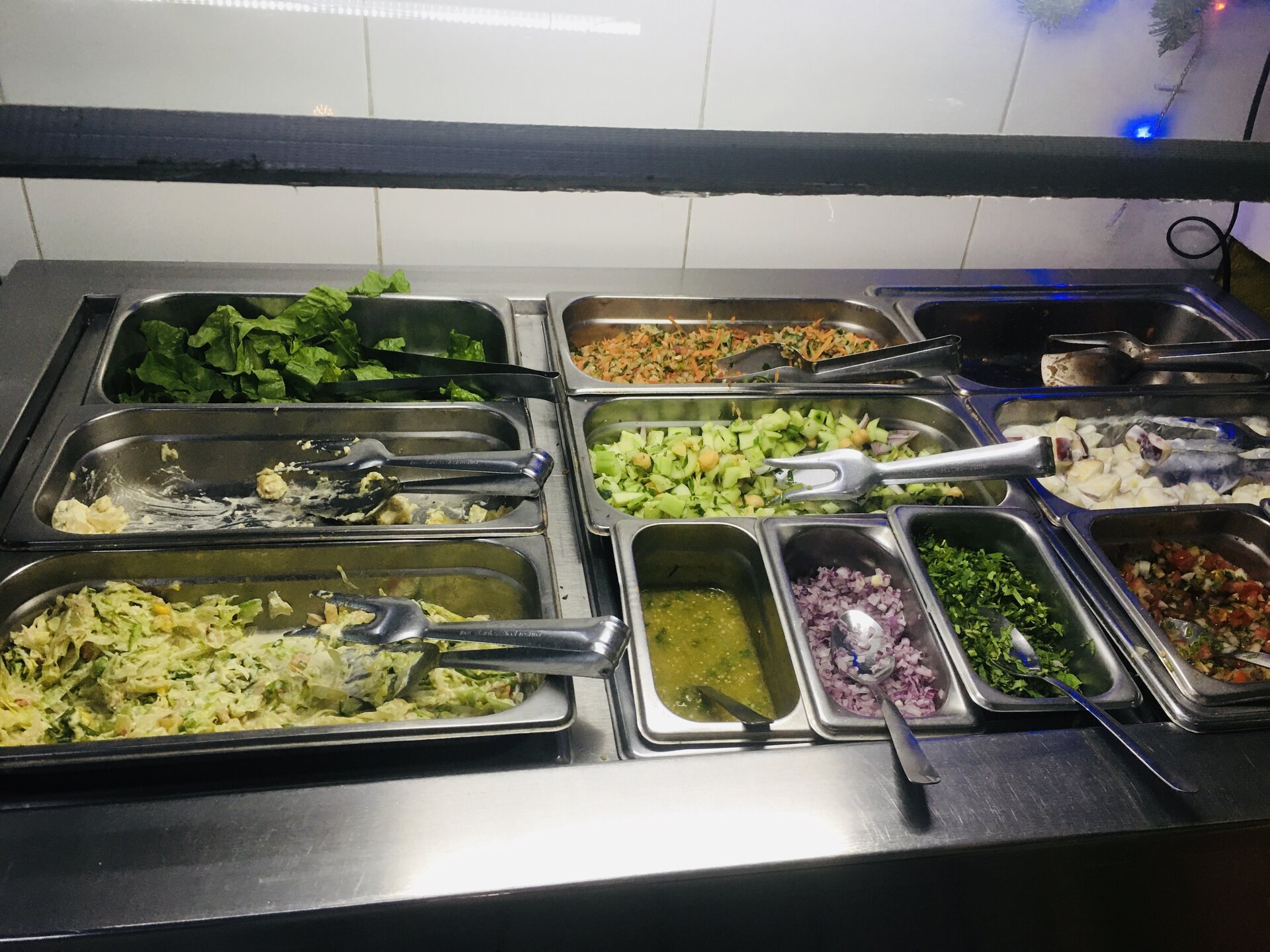 My first plate I got I don’t remember what all I put on it, and I put it on so sloppy-ly that I didn’t even bother taking a picture of it. But, with my second plate I made sure to make it look nice, and I remembered to take a picture of it. I served myself a big piece of the potato casserole, some al pastor, ceviche from the salad bar, a little bit of a cucumber-garbanzo salad, white rice, and a big pile of the refried beans on top of that. Now, let me start with the potato casserole, if you can even call it that. I’m actually not really sure what it is, but it’s super creamy, super rich and dense, and super full of flavor, so when I remembered that it’s vegan, it completely shocked me. It tastes like it’s full of cheese and cream, and they could’ve used vegan cream and cheese, but I’m not sure. The al pastor was a little sweeter than usual, as it was mostly flavored by pineapple since there was no meat, but they still replicated the flavor of the meat really well, and the texture wasn’t anything like tofu! Who knows how they did that!! The ceviche tasted just like fish ceviche, but without the fish. It’s ahrd to explain, but it was good, and super fresh. The cucumber-garbanzo salad was good, but it wasn’t my favorite. The flavors didn’t really mix together, and instead you just tasted cucumber, red onion, and garbanzos separately, but it wasn’t bad by any means, and it was super fresh like the ceviche. Finally, the rice and beans. The rice had a lot of different veggies like Mexican white rice does, but the beans were super super good, and there’s not much you can say about black beans, but I did really enjoy them. 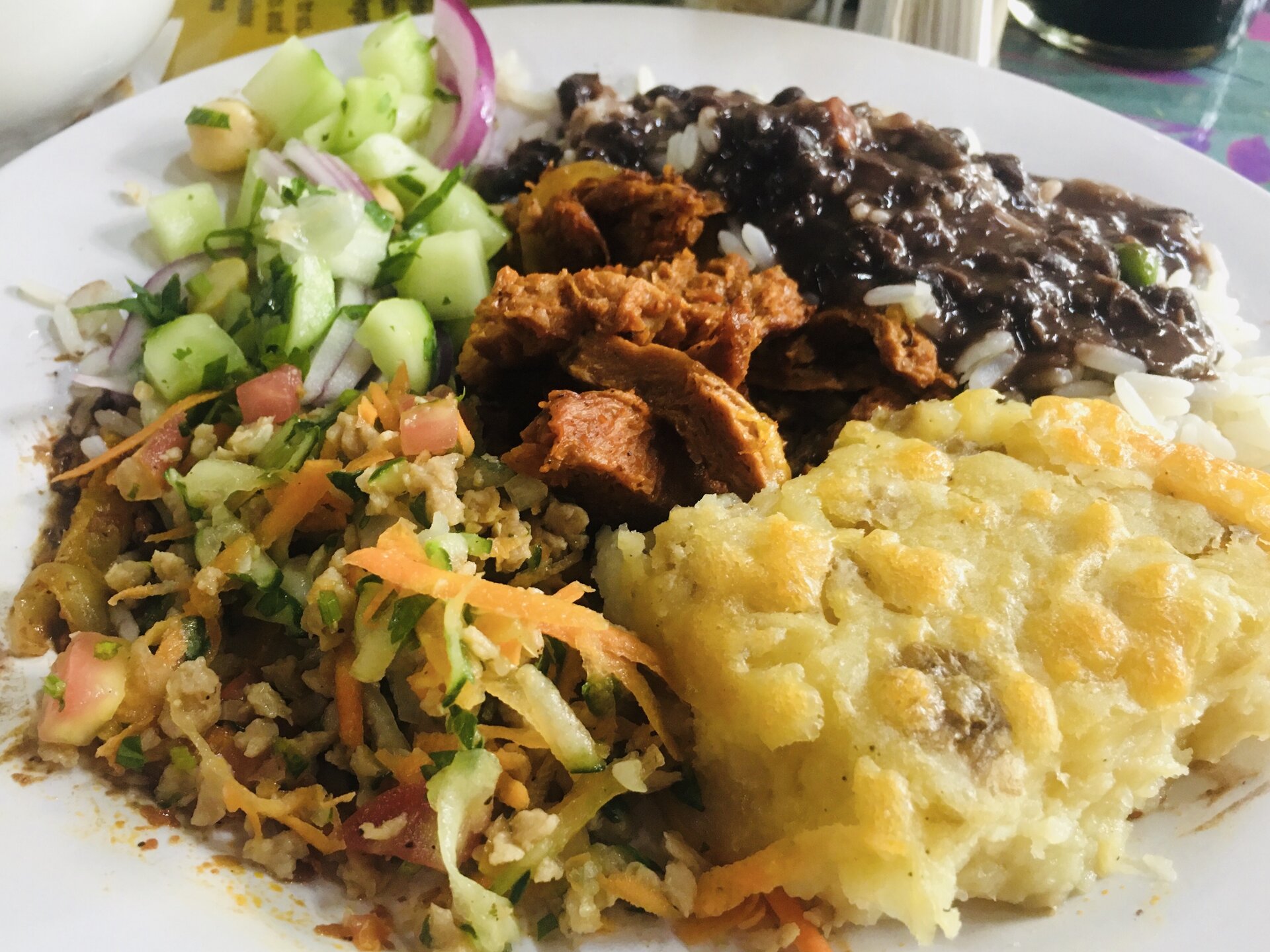 After that plate I was kinda full, but I got a little bowl and got some papaya and apples with cream. I’m not sure what they used for the cream, although I suppose they could’ve used vegan cream, but it was really rich as well, and really sweet! It kind of tasted like melted whipped cream, but either way it was really good and I’m not gunna question it. And, when I was done with that I got brought the cake! Like I said before it was really rich and dense, but at the same time it was fluffy, so it was a strange yet delightful texture, and the flavor was just as nice. It tasted quite dark, but it also had a fair amount of sweetness, so it was basically a perfect chocolate cake. 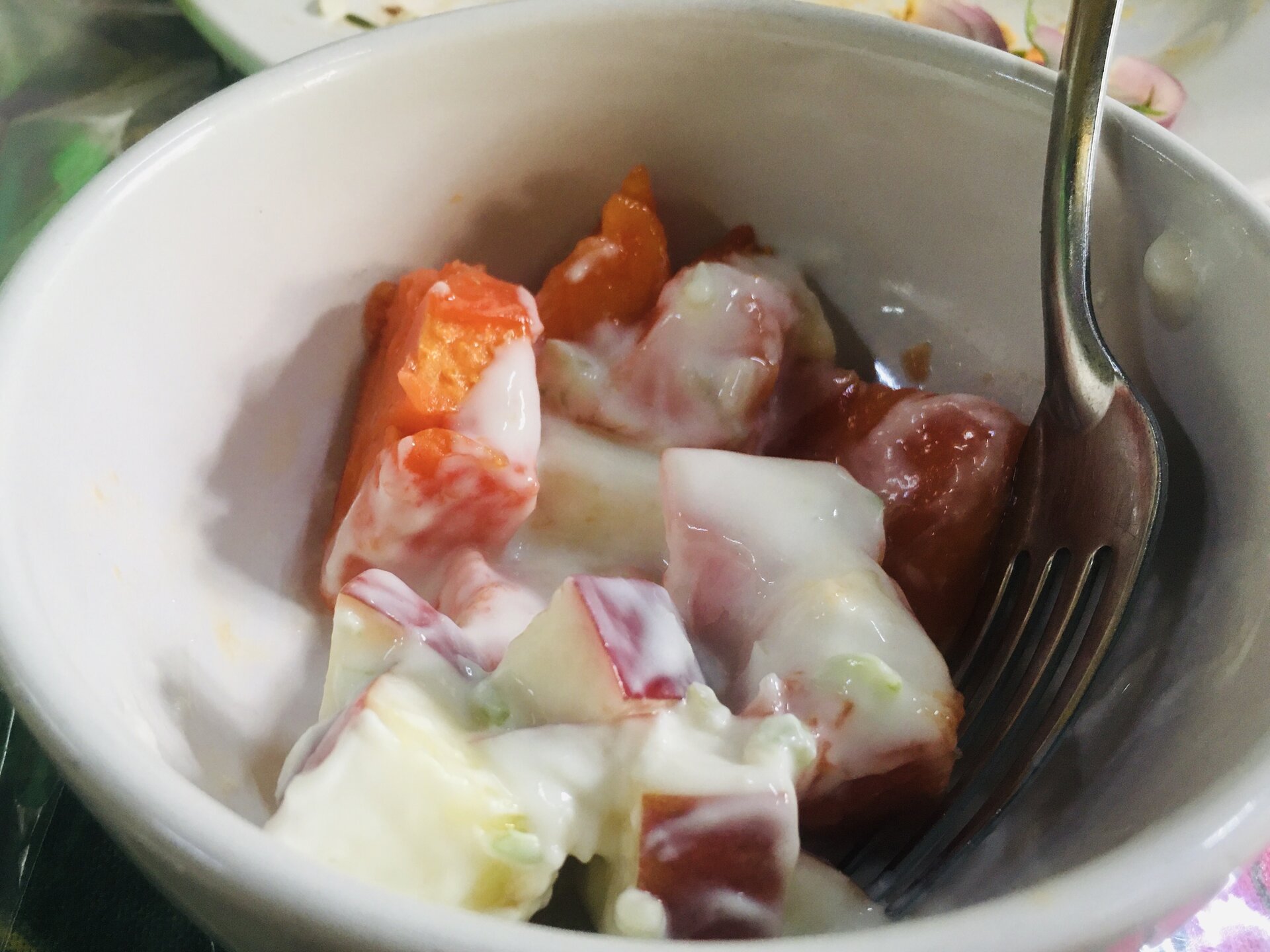 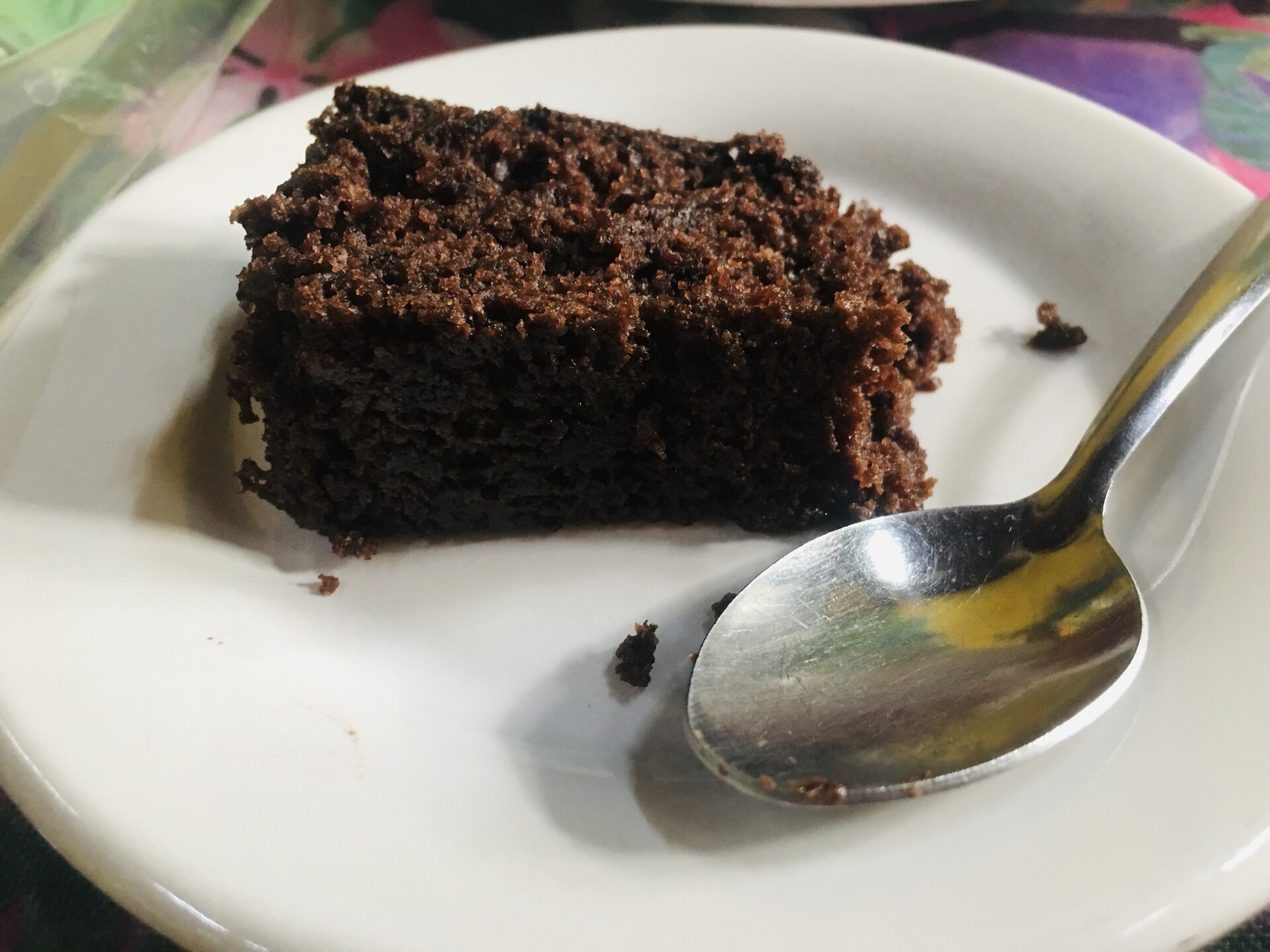 My dad had a few different plates, but the thing is that the second he sat down he both pulled his mask off and started shoveling the food down at the same time because it was so good. If this were an eating competition, he would’ve won. He ate so fast that I was halfway through my plate when he was already eating his seconds! But, that also meant he didn’t even allow me to take pictures of his plate, but oh well. Anyways, I think he started with the soup, which was cream of vegetables, but he says it was sooo creamy, and it tasted like it had lots of butter too, so to think it’s vegan is unbelievable! Then from there I’m not sure what he had, but he tasted everything. He too agrees that the al pastor tasted really close to meat, except it was a little too sweet, but it was still good. The rajas I didn’t taste because I’m not a fan of them, but my dad said they were actually the best rajas he’s ever had the thick sauce tasted like a meat and tomato gravy, yet it had no meat! And then there’s the potato casserole, which tastes so creamy and cheese-y that my dad is also so confused as to how they pulled it off, how all the flavors are still there. Lastly, the beans and two different types of rice. He tasted both of the types of rice, but he liked the yellow one better because it tasted almost nutty, and like it had pine nut or something, but then again it might’ve just been the type of rice, as some rice have a nutty flavor. He also really enjoyed the beans, and liked how it still had some whole beans in there. Now, as for dessert, my dad doesn’t like sweets so he didn’t have any, and John gave the cake to the table next to us, since it was un-touched.

Planeta Vegetariano is actually a really cool place, because not only is the food great but there’s’ always calm music playing in the background, and the staff are all like family to each other, and they treat the customers like that as well. Also, there are really cool paintings all over the walls of different landscapes, and there are some different Disney characters here and there that are fun to spot. On top of that there’s also some funny or nice quotes here and there, so those are cool too. Really just everything about this place is so nice, and we all love it!! And, if you'd like to learn more about John Benus click the links below. 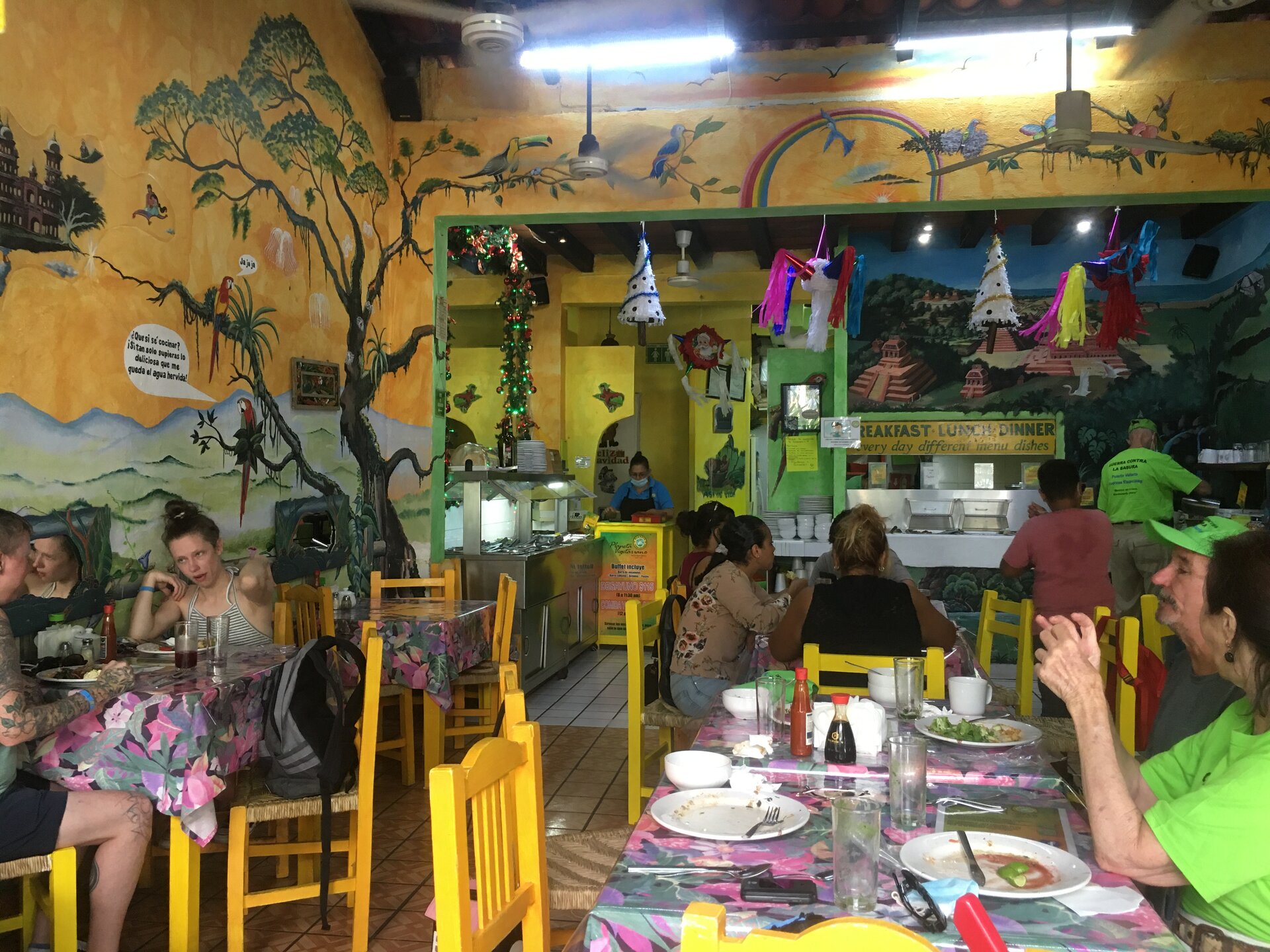 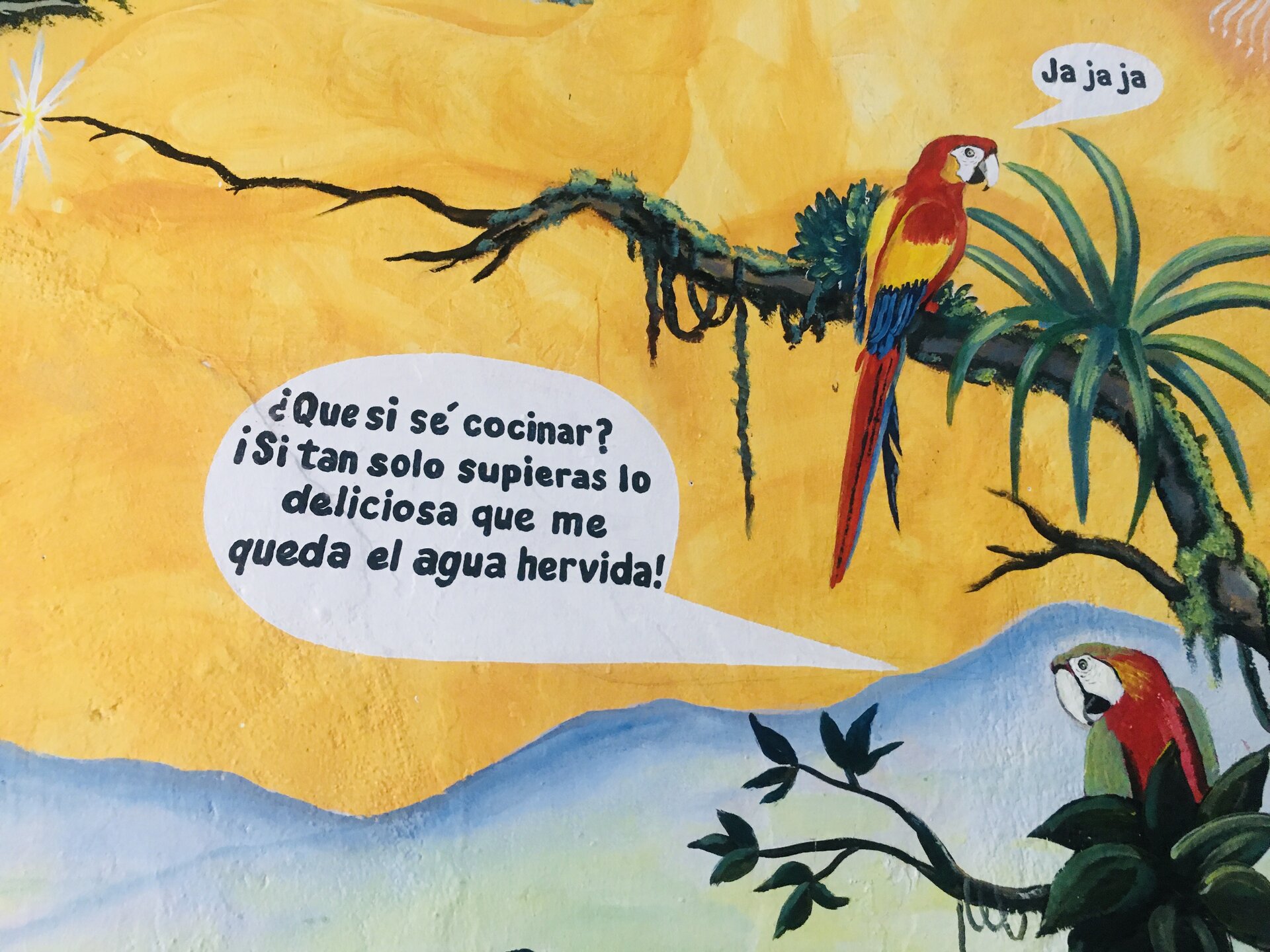 Convincing People To Use Containers Article