Mariscos At Pichi With Michi 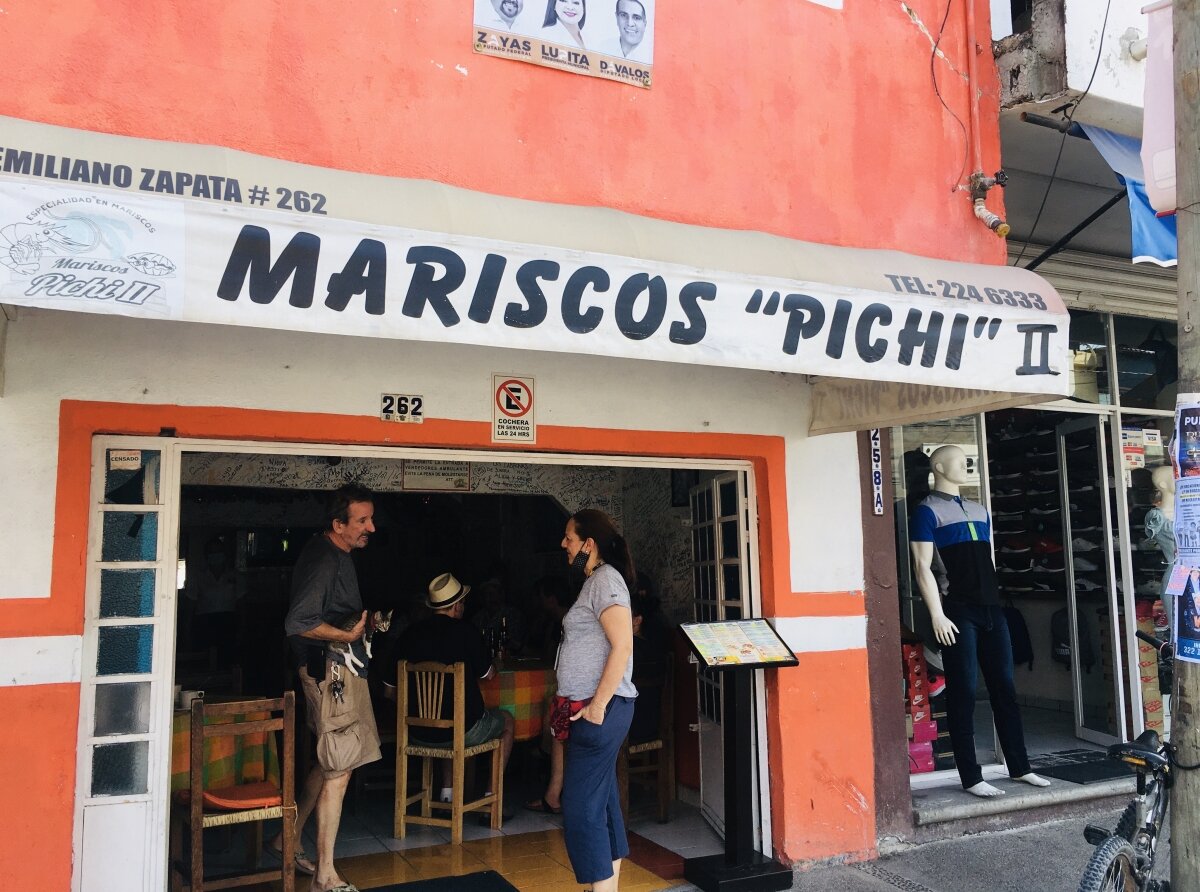 Today we went out to Pitillal to run some errands, and we ended up finding a super cool restaurant with great food and a great vibe.

As you may or may not know I have a snake, a ball python, so every so often I have to go to pitillal and buy some small rats or mice, since they’re so much cheaper here than from Kota or some other big shot pet store, and at PetCo they only sell them frozen. But, of course, we also have to stop at a place to eat when we go out, so naturally today when we went out we stopped at a place in Pitillal, since, well, we were already there, and tourists don’t go there too often. But, what I found exciting was that while we were coming in a large group of gringos were leaving, and turns out that a woman, Joana, from Vallarta Food Tours was taking them around town to hole-in-the-wall places, or at least places tourists don’t really know about. Similar to places I write about! Anywho, the place today is called Mariscos Pichi 2, and is located on Emiliano Zapata 262 in Centro Pitillal. 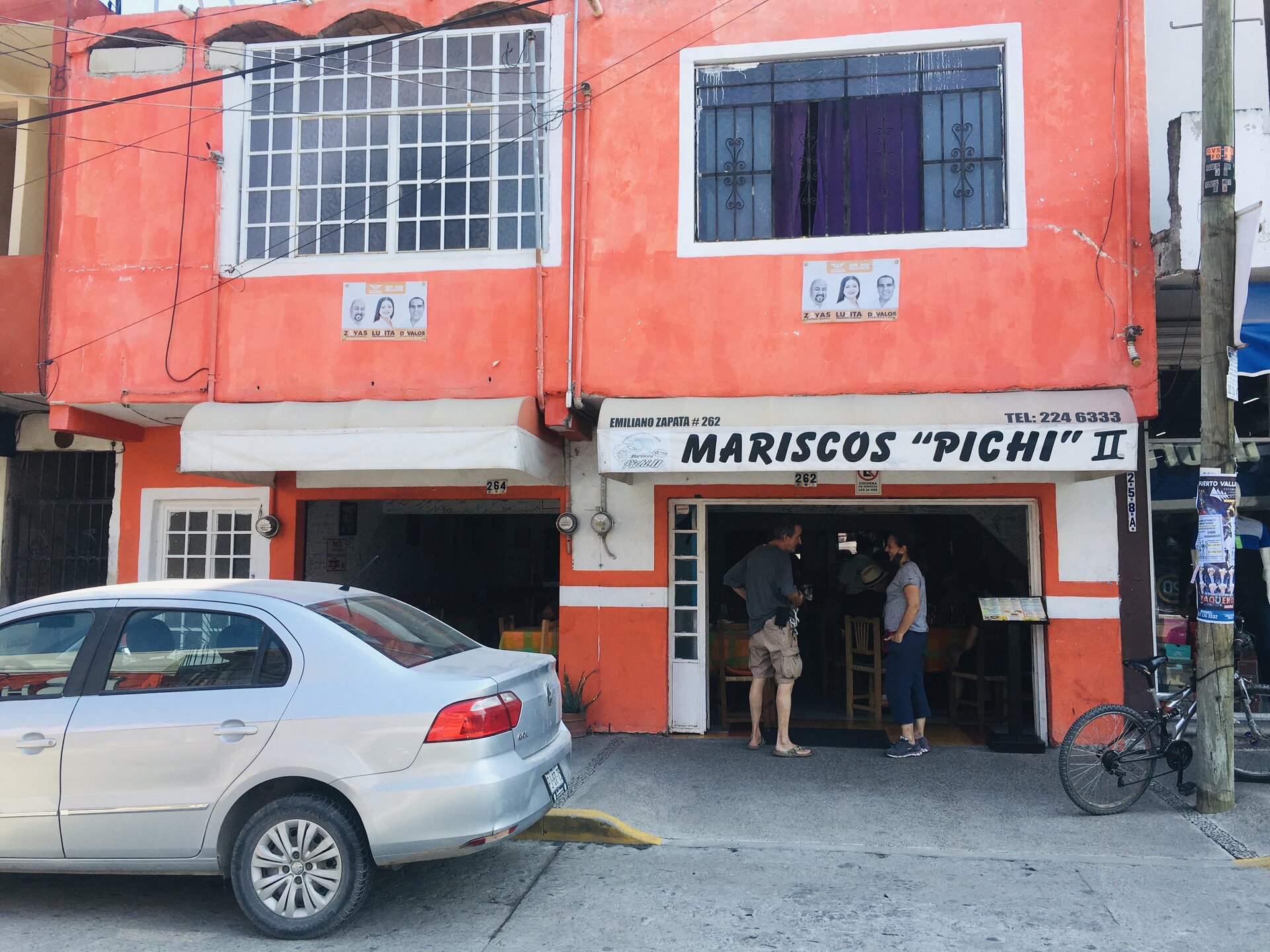 Pichi 2 is a mariscos, or seafood restaurant, as it’s even stated in the full name, but they also have some other non-seafood items which include guacamole, nuggets, and either chicken or beef burgers (though there is also an option for shrimp). And the seafood here varies from warm fish tacos or quesadillas to cold aquachiles, cocktails, and even avocados stuffed with tuna or shrimp, but of course much more. So, even if there are only a couple non-seafood options, the variety between the seafood is grand! They also have lots of different drinks, and if you order a bucket of beer, which includes 5 beers for 145 pesos, you get completely free snacks to go along with them, and that’s only 29 pesos per bottle! 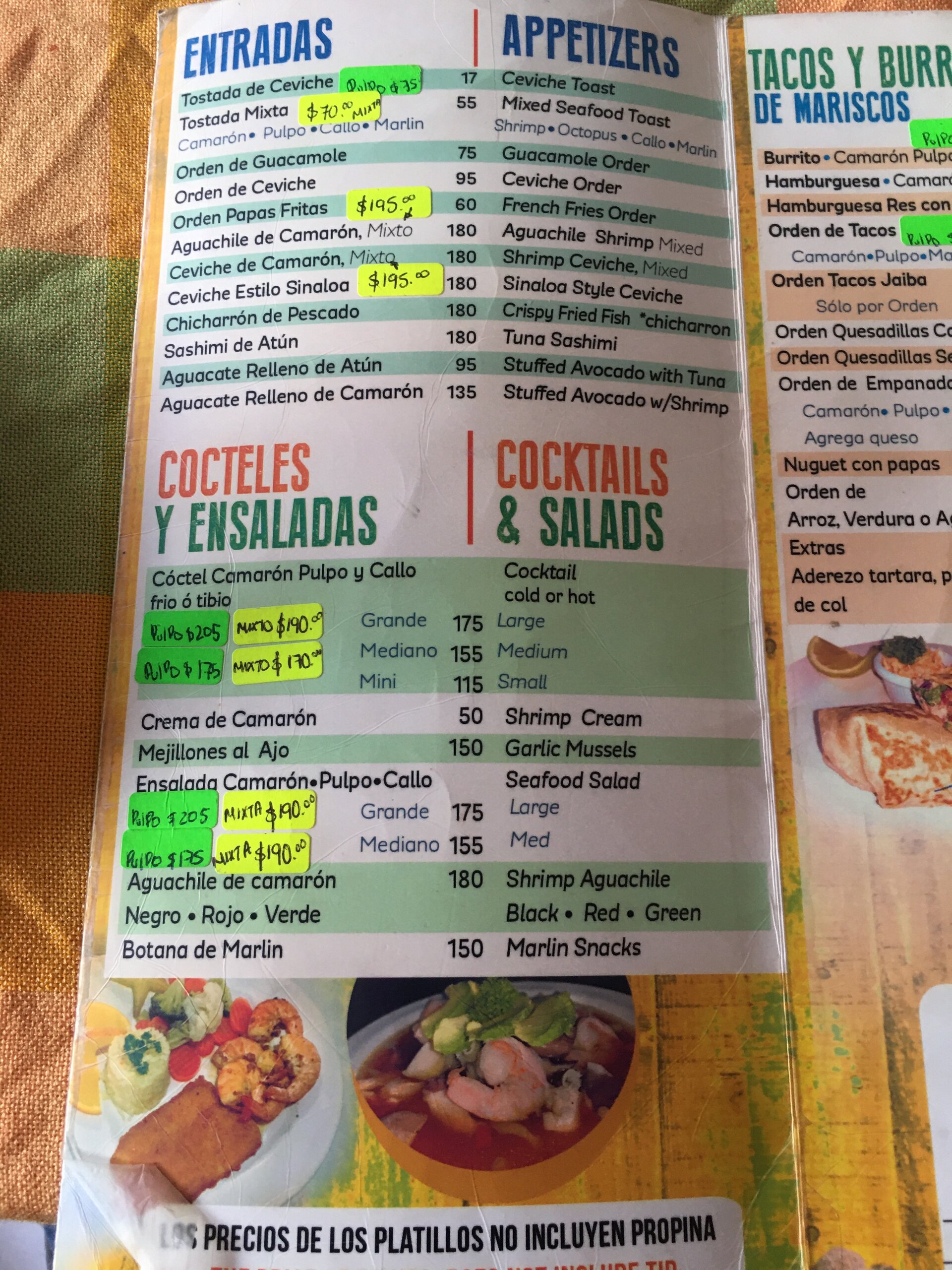 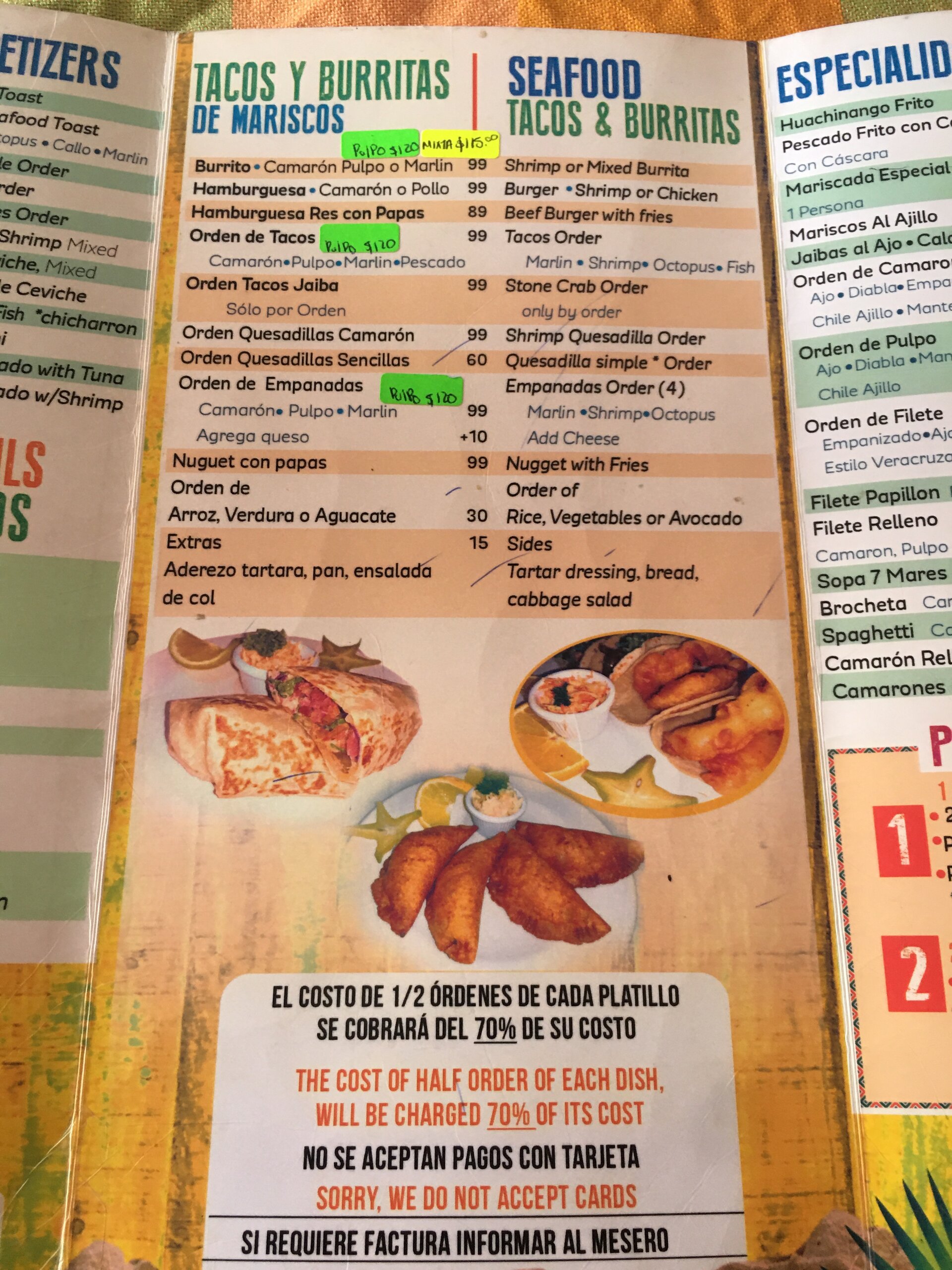 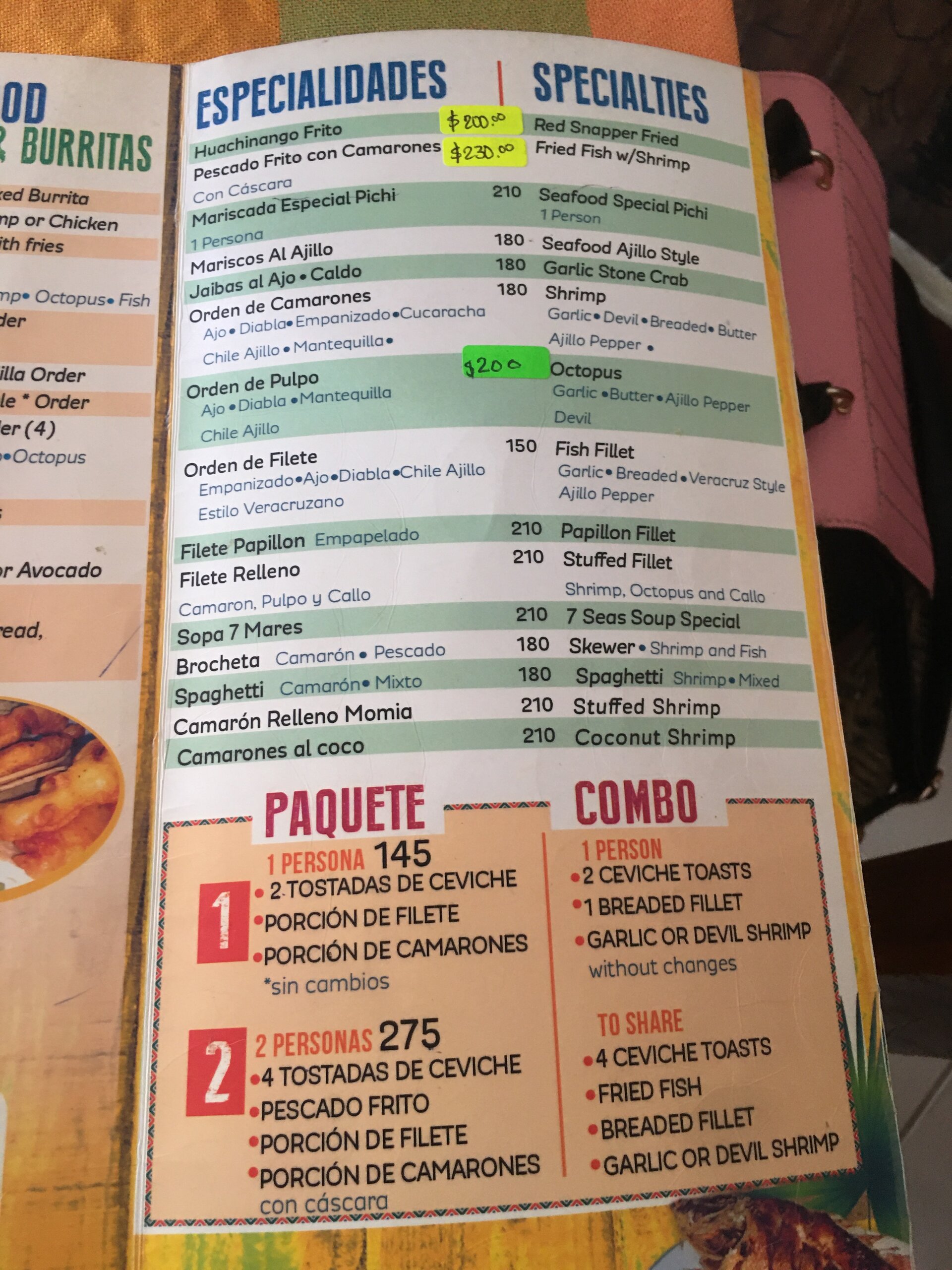 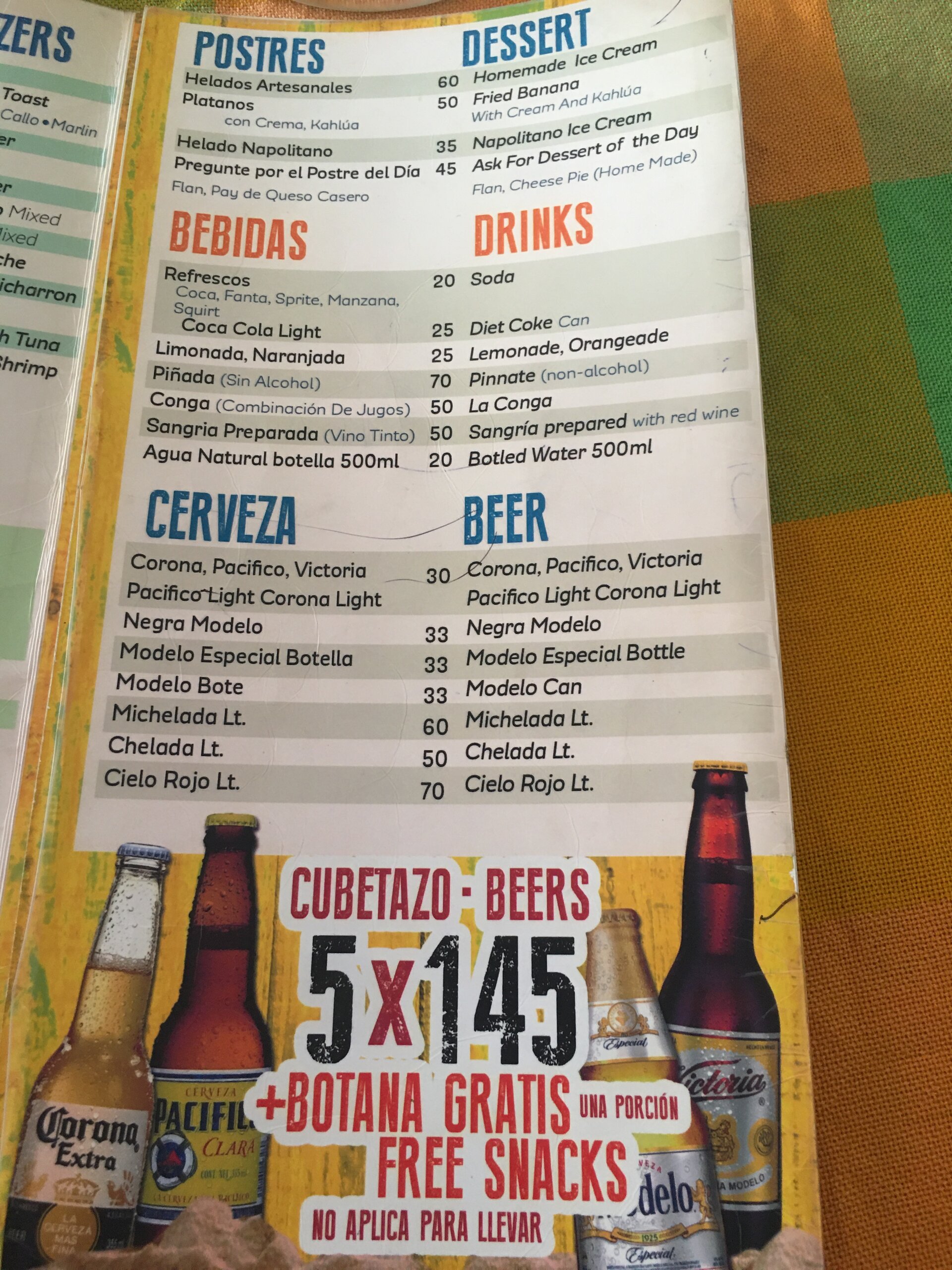 Of course I can’t drink beer, though even if I could I doubt I would, so I got a naranjada, or orangeade, with mineral water, and to eat I got the tuna sashimi. Now, I know I normally don’t bother to talk about my drink, and I’m not going to go into detail about it, but I do want to mention that it was really good, and I think freshly squeezed oranges were used for it. Now, about my tuna. I was expecting Japanese sashimi, but the one they served was Mexican-style, and similar to an aquachile, so I was definitely surprised, but I’m not saying it was bad in any way. It was actually delicious, and the sauce, though very sour from lots of lime, had really good flavor with an ever-so-slight touch of spiciness. There was also purple onion thinly sliced and teeny tiny slices of chili pepper, though I couldn’t tell you what kind, so that also added a little bit of heat as well as some crispness. The meat itself was really tender and soft, but again it surprised me since it was cut a lot thicker than I was used to, and wasn’t as bright in color as others I’ve had. Again, I’m not saying this in a bad way; it was simply a different style of sashimi with a different type of tuna. 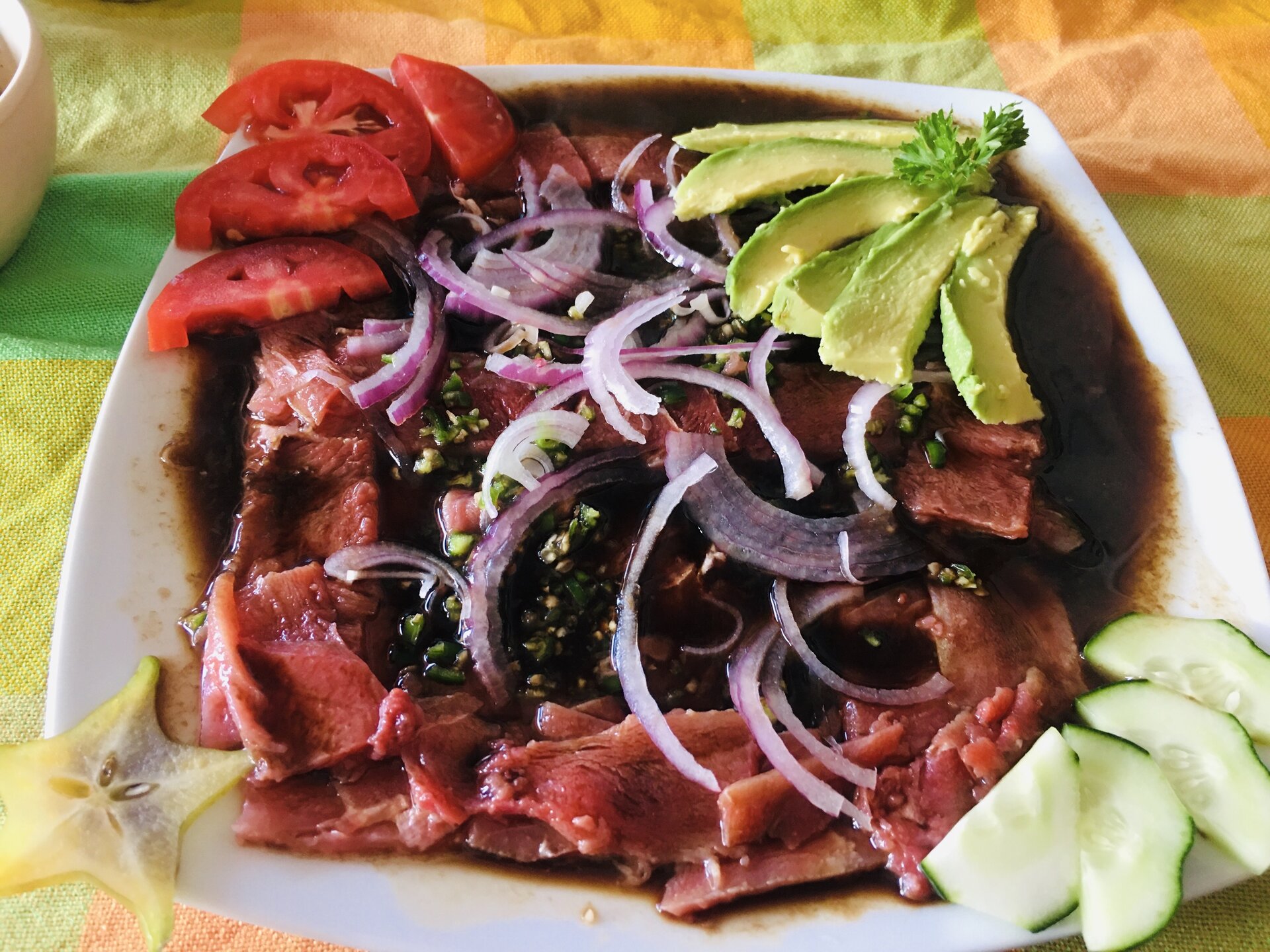 After my sashimi of course I had to get dessert, but the problem was I couldn’t decide what to get. I’m super indecisive, especially when it comes to sweets, since I want to try them all!! I’m definitely a sweet tooth, haha. But, finally I chose ice cream, though then that was another struggle of choosing what flavor, though again I finally chose cookies and cream, aka oreo. It was actually really good, and really creamy! It tasted just like the inside of an oreo, though maybe a little less sickeningly-sweet, and the thick layer of cookie crumbs on top made it taste just like an oreo, or at least a frozen oreo. Really though, I totally recommend this out of alllllll the different artisanal ice cream flavors. 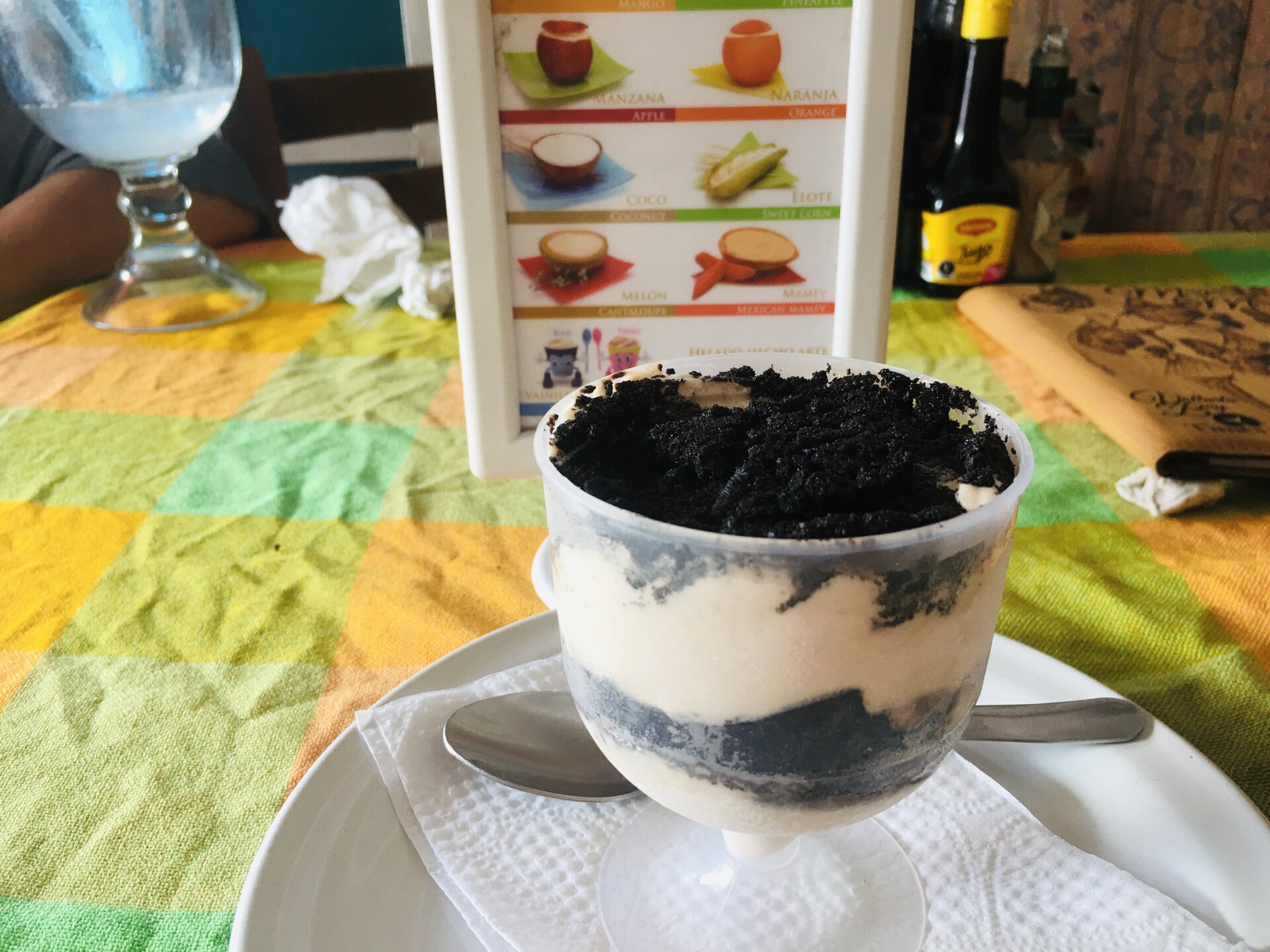 My dad got a limonada, which was just as good as my drink, but to eat he got a shrimp burrito. The burrito was actually quite big, and the price was very fair, you could even say low-cost. But, before I get into that I want to talk about the salsas, since my dad always has to go on-and-on about them. The first sauce was a regular chile oil sauce, that’s normally made out of chile de arbol, except this one had chile de arbol and guajillo, and it had a strong peanut flavor. The other one was a Mexican pico de gallo-type sauce, though it was much spicier than others and was very lime-y, which isn’t that common for pico de gallos, so it was super unique and super good. But when I say super good I mean it, because if I were to actually writer down everything my dad gad to say bout this salsa I wouldn’t have an article I would have a 5-page essay. And, my dad’s burrito was accompanied with a salad, so lets just say that the salad turned into salsa with a pinch of lettuce and tomato real quick. Now, about his actual meal; the burrito. The burrito had lots of different vegetables in it and lots of shrimp in it, except the shrimp were chopped up, and bite-size, so it was actually kind of a perfect burrito. Also, the onions in it were caramelized, and gave the whole thing a pleasurable sweetness all throughout. 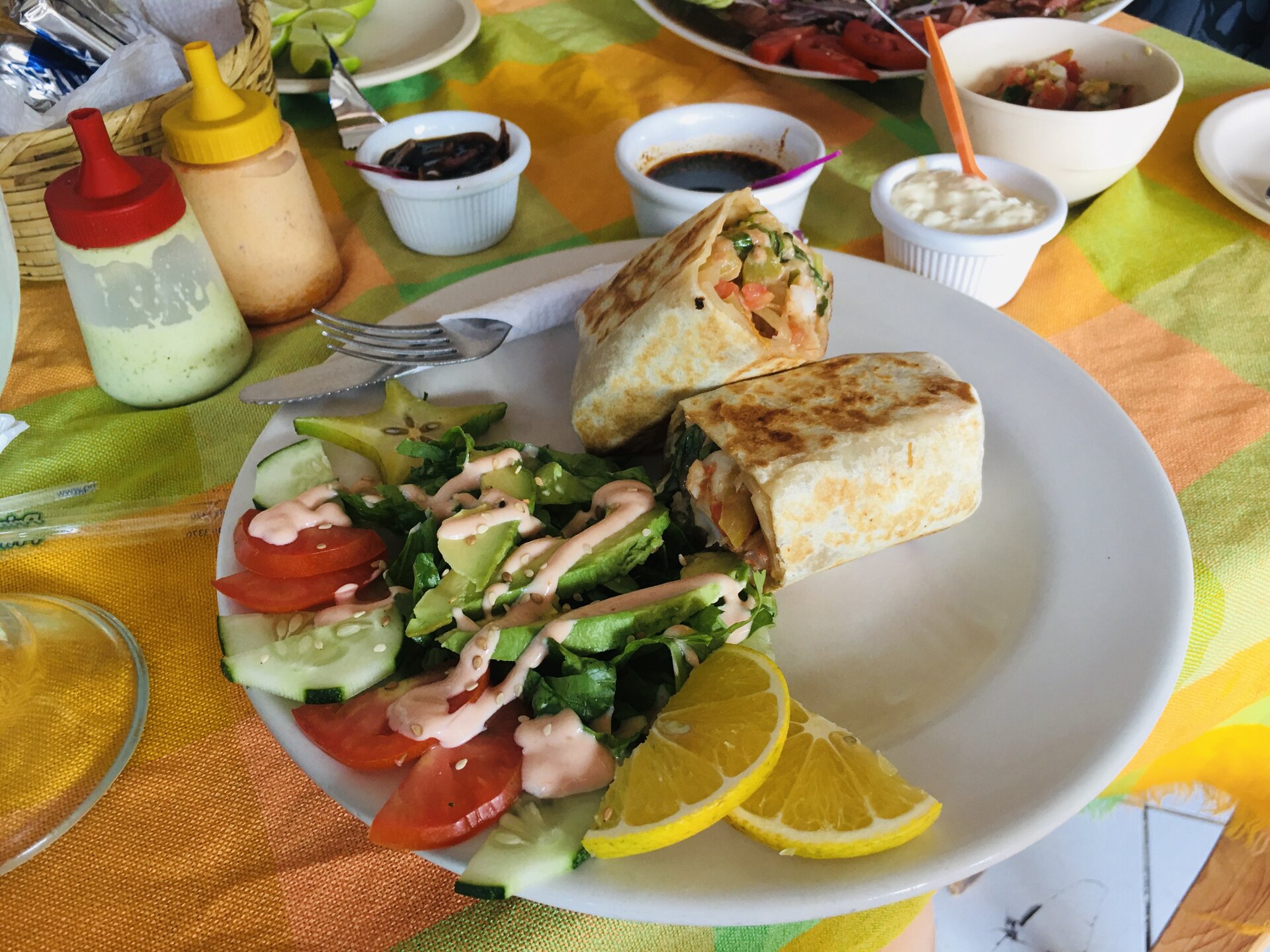 Pichi 2 is actually a pretty decently sized area, but it’s really cool because there are writings and signatures all over the walls from people who came to visit. Even I wrote on it, a heart with my name and Michi’s, also a little cat face. It was fun to write on it, but all the tourists there also looked so happy. Like, they were extremely happy! They had a giant smile on their face, and as they were walking out they were all talking about how not only they loved the food but they loved the ambience, and of course, writing their name on the wall or ceiling, which will probably be there for as long as the restaurant is open. Also, my dad ended up talking to one young couple, and they said they come down every year, but didn’t even know Pitillal existed, so they were super appreciative of Vallarta Food Tours for showing them the real Vallarta, where people go to work, and live, and eat, not the tourist zone full of, well, tourists. So far, the restaurant has been open 19 years, and their other location, called Pichi 1, has been there for 23, and I’m pretty sure they have names on the walls as well. By the way, the restaurant is called Pichi because the original founder was nicknamed Pichi, but now he’s quite old, and his sons run it! 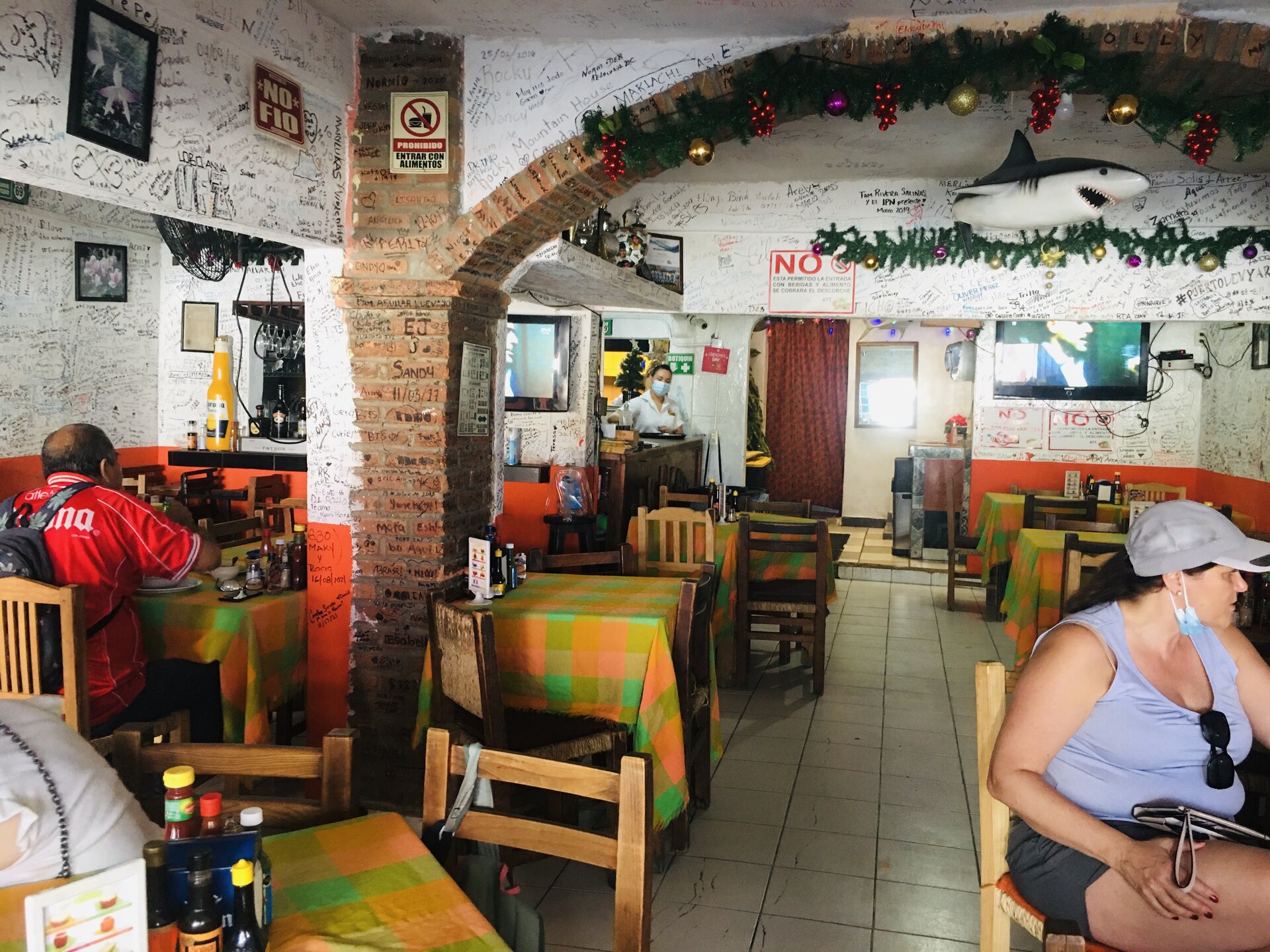 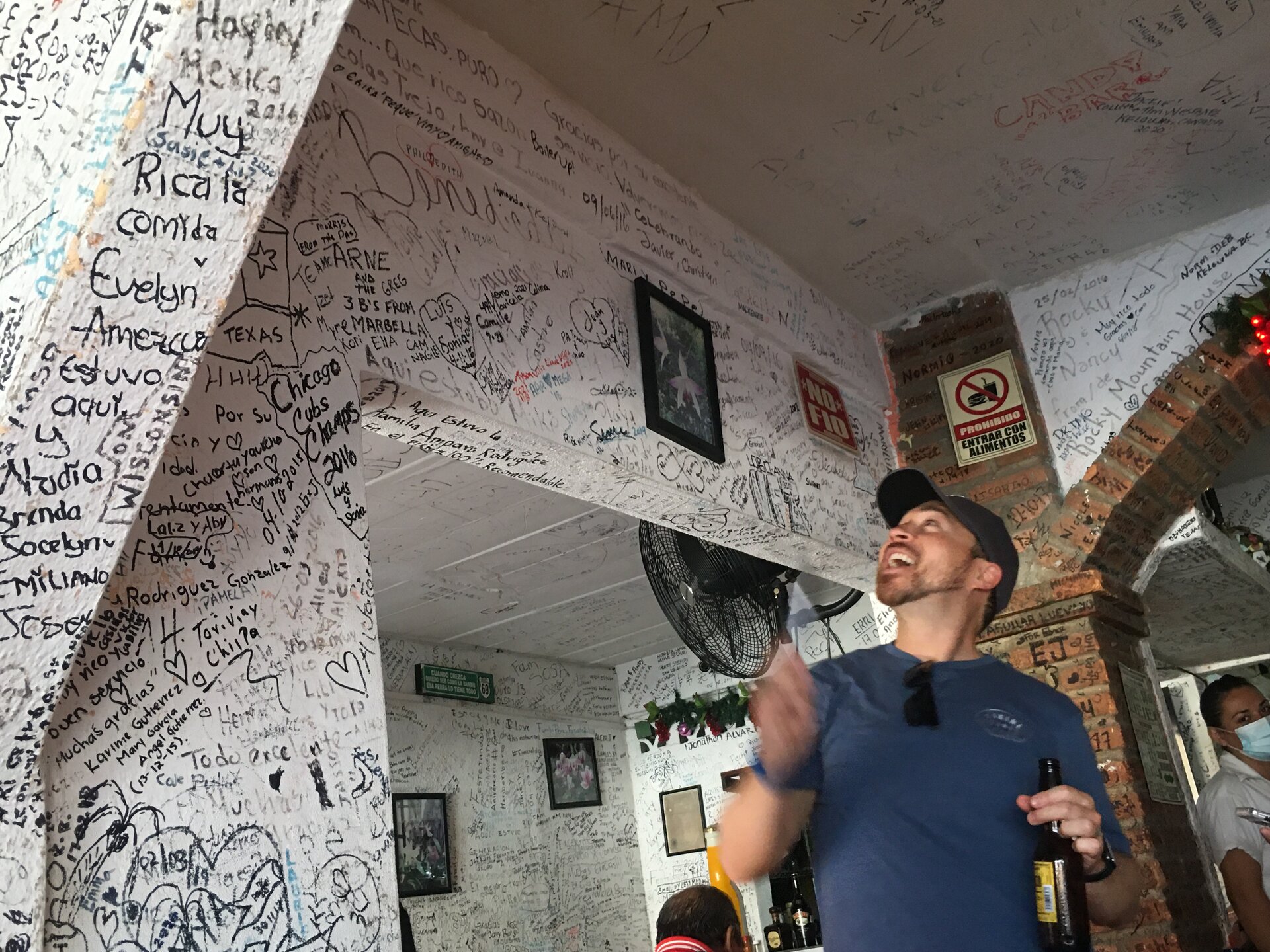 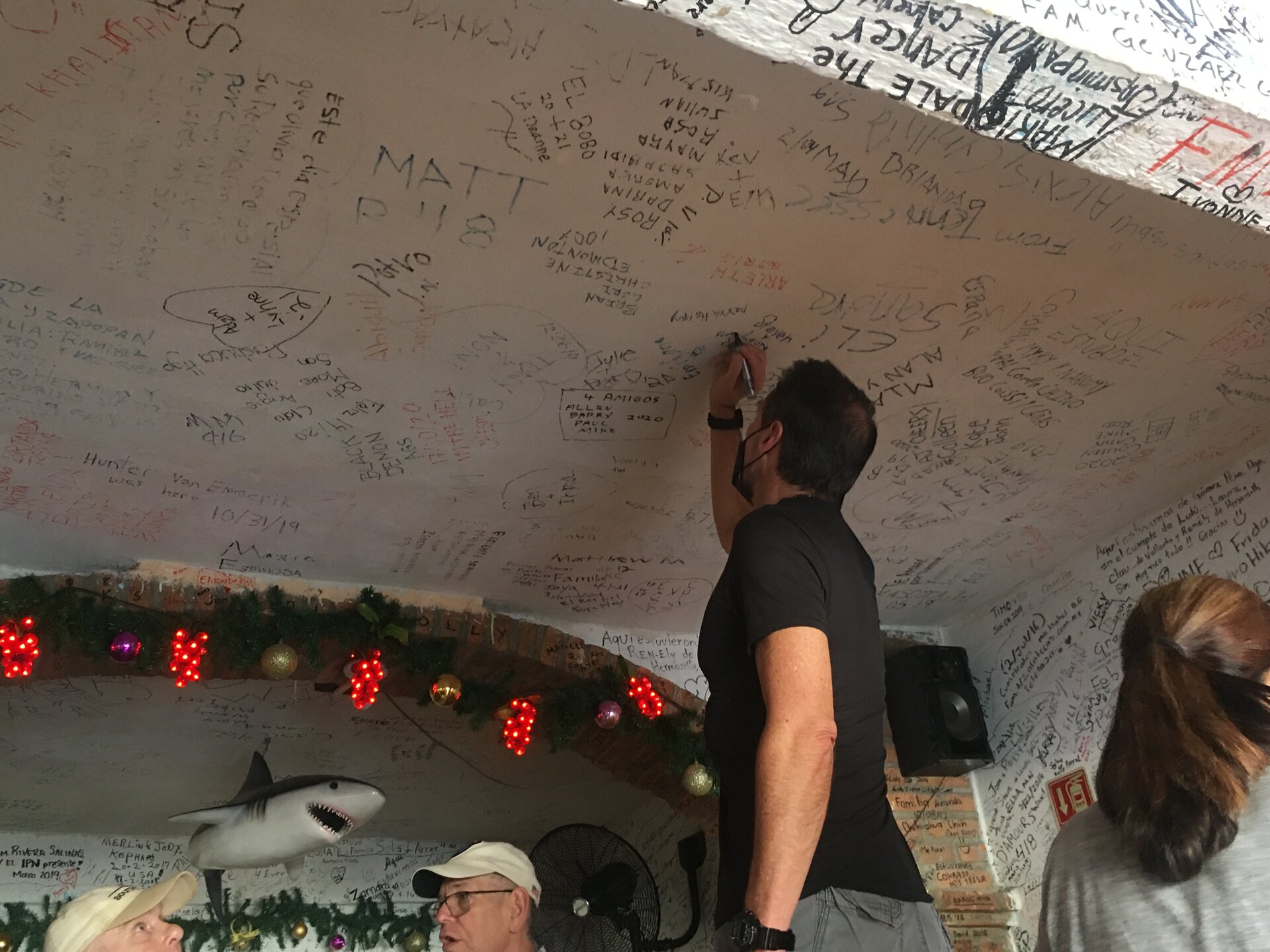 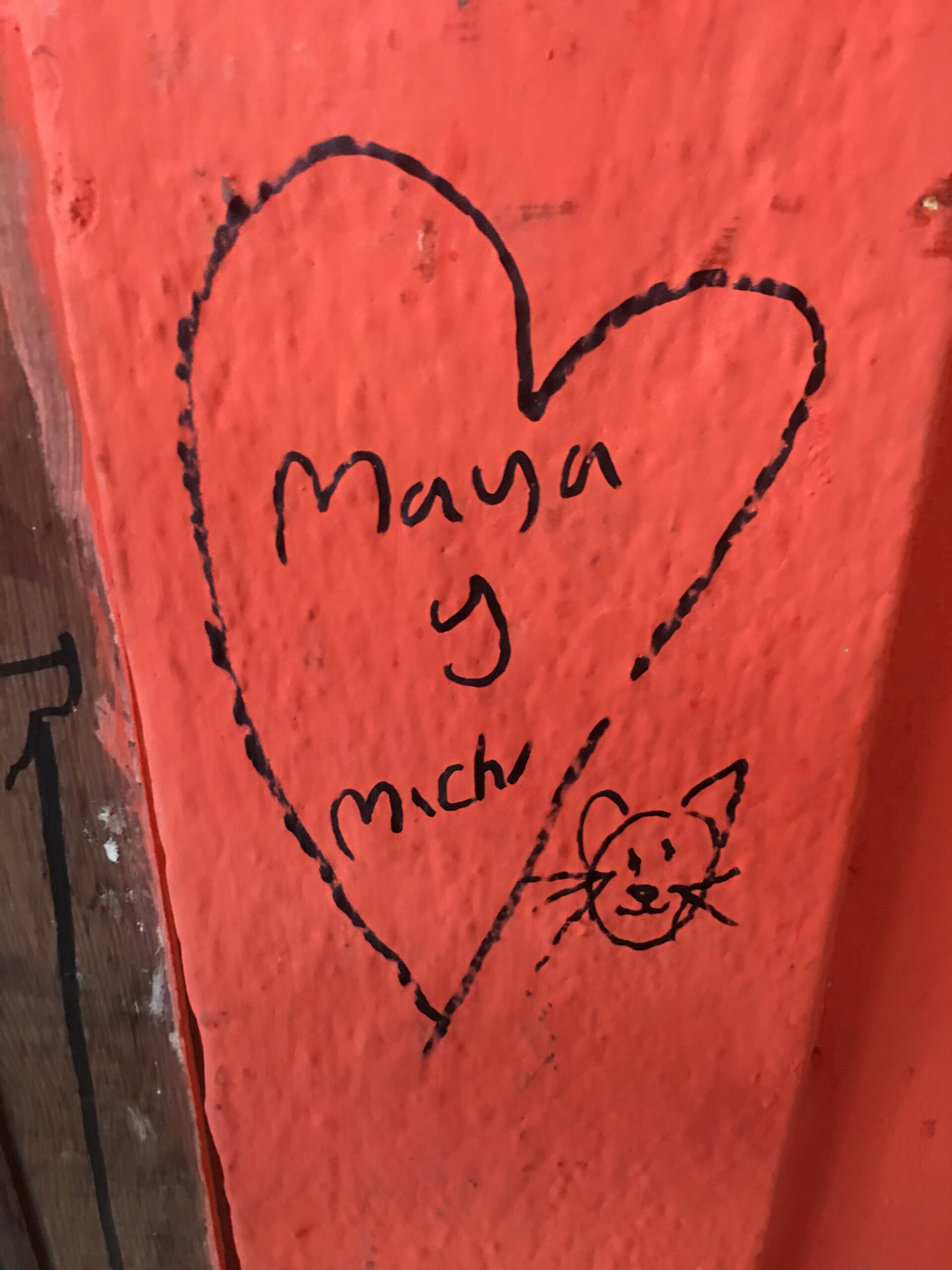