Get a Fusion of Flavors at Gohan Sushi Restaurant 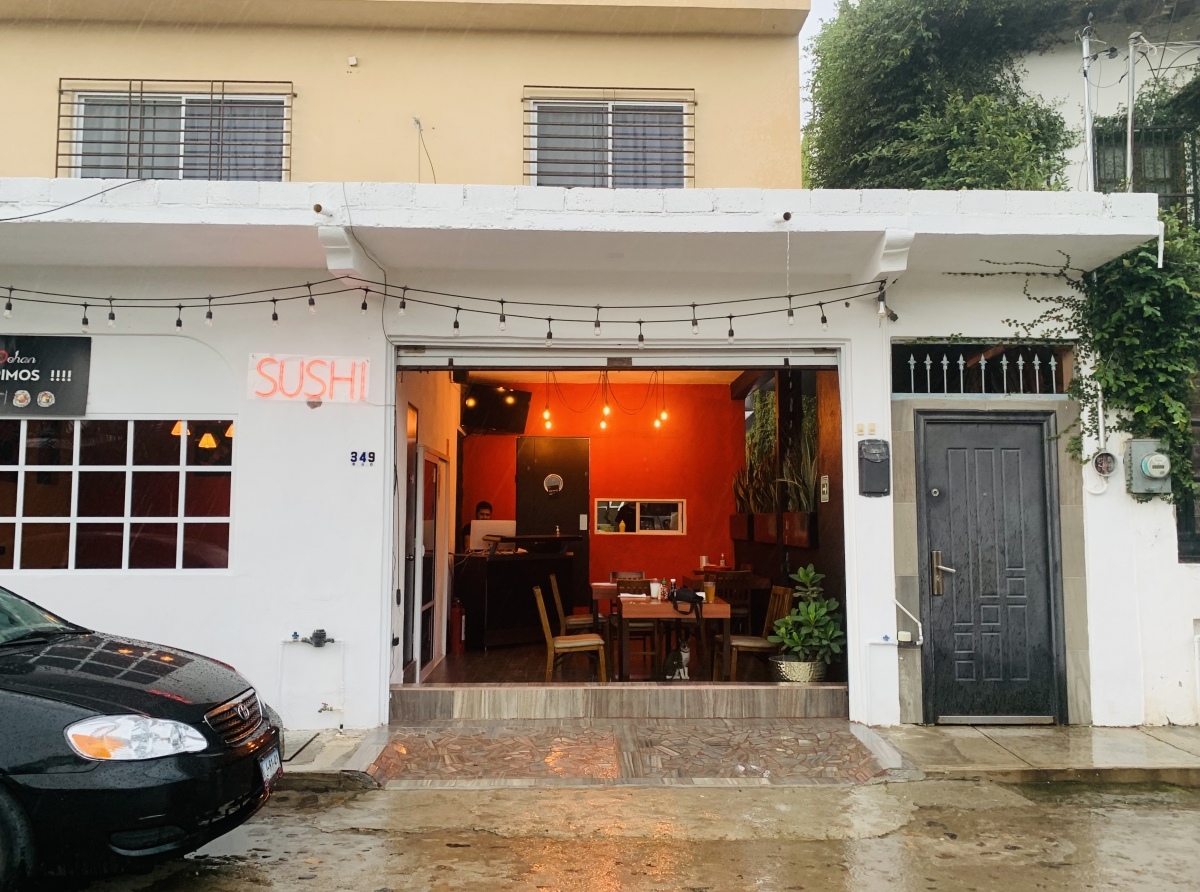 Today we went to a new sushi restuarant we haven't tried before and the food was amazing.

Most of the time that me and my parents go to town we have to go down Calle Pavo Real, and a couple months ago we saw a poster for a new sushi restaurant nearby. And ever since I first saw it I’ve been wanting to go there and try it out, but I always forgot about it until we were driving back home and I would see the poster again. That is, until today. The place is called Gohan Sushi, and is located on Calle Juan Aldama 349 in Independencia, which is very close to a few schools including Ameyali and Vancouver. There are also pet friendly! And one more thing, they do very affordable delivery starting at 45 pesos for 4.5 kilometers or less and an extra 10 pesos for every kilometer after that. 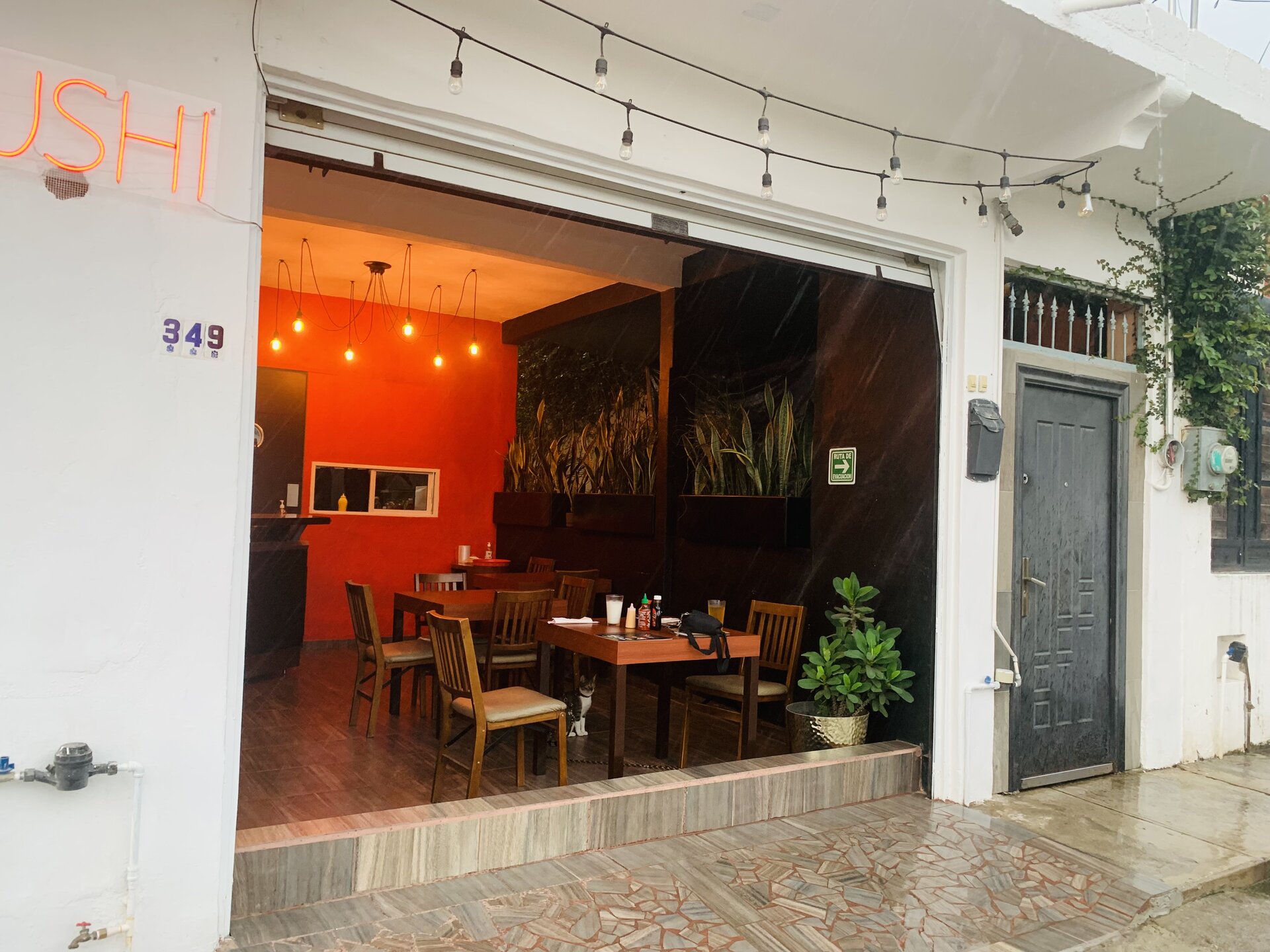 The owners, Andres and Gerardo, actually used to have a different Japanese restaurant, but they had to close down during the pandemic. But, Gerardo is also a chef who went to school here in PV, and he has a passion for food, especially Japanese food, so they had to open a new restaurant. And, let me tell you, the food is amazing, and the menu is very smartly put together, as well as good looking. They have a variety of different appetizers, rolls, rice dishes such as yakimeshi, soups, breaded or tempura items, and desserts! 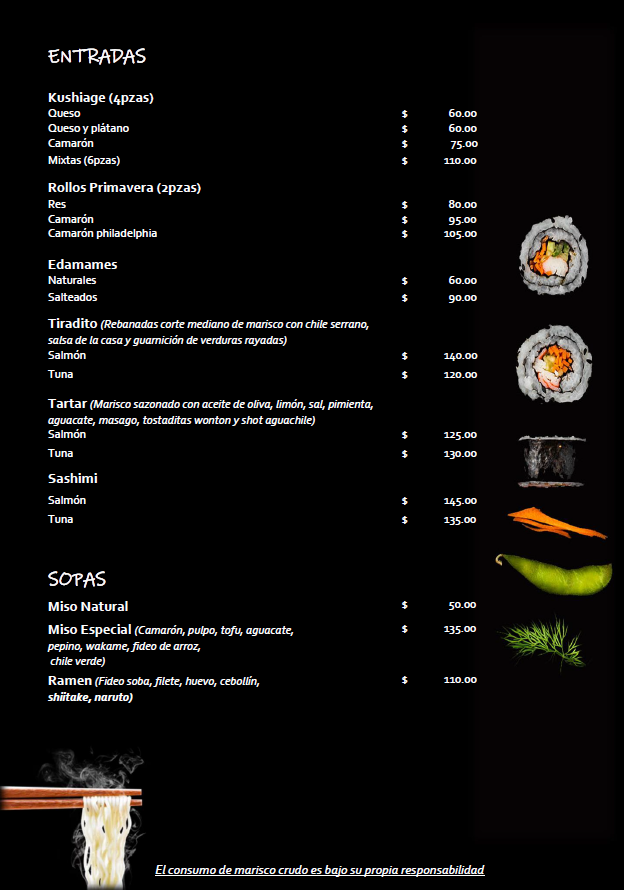 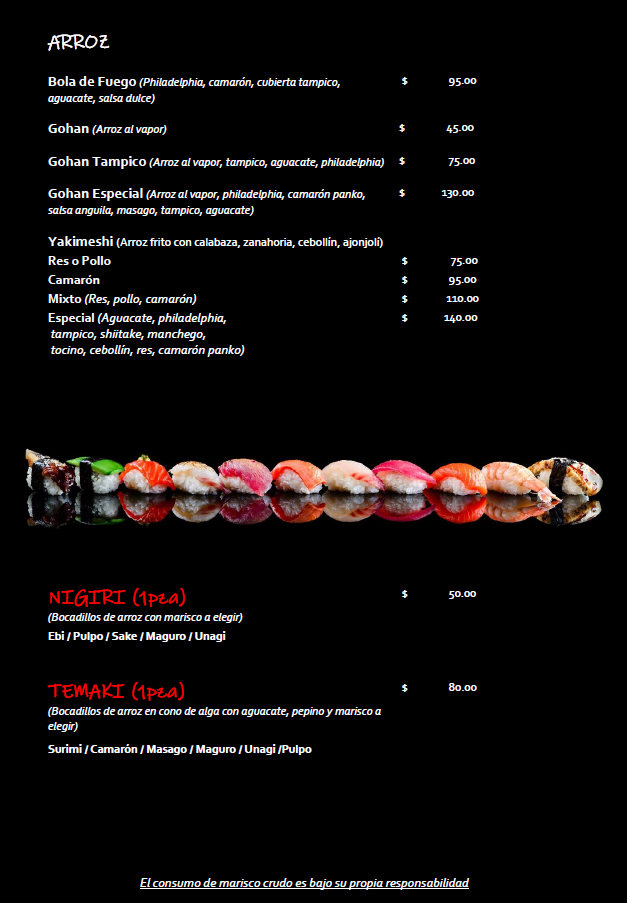 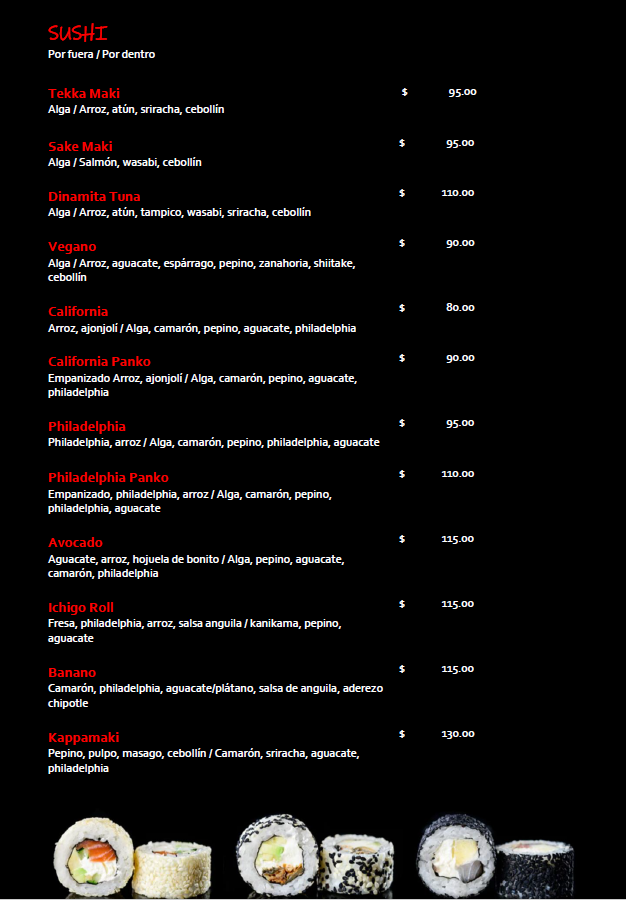 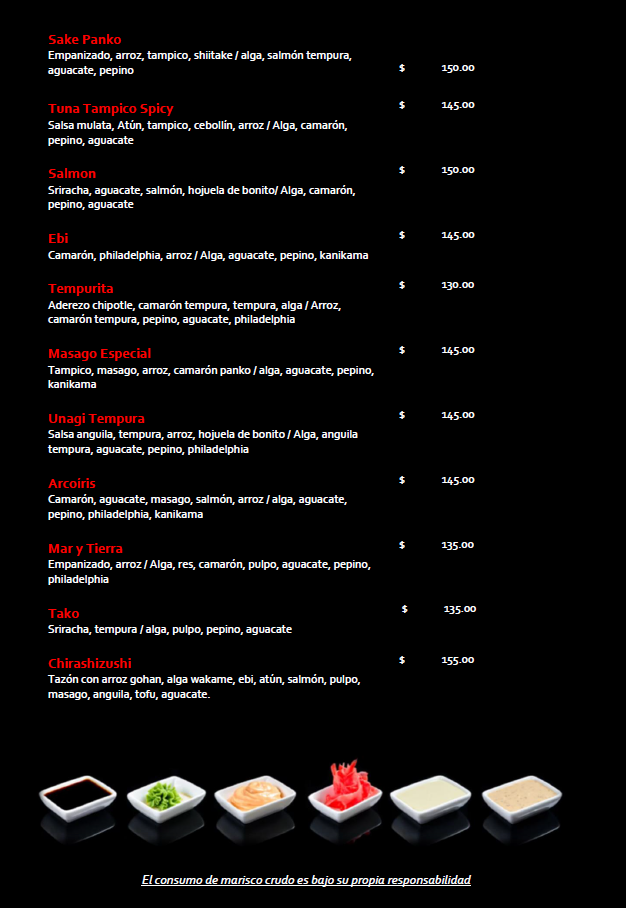 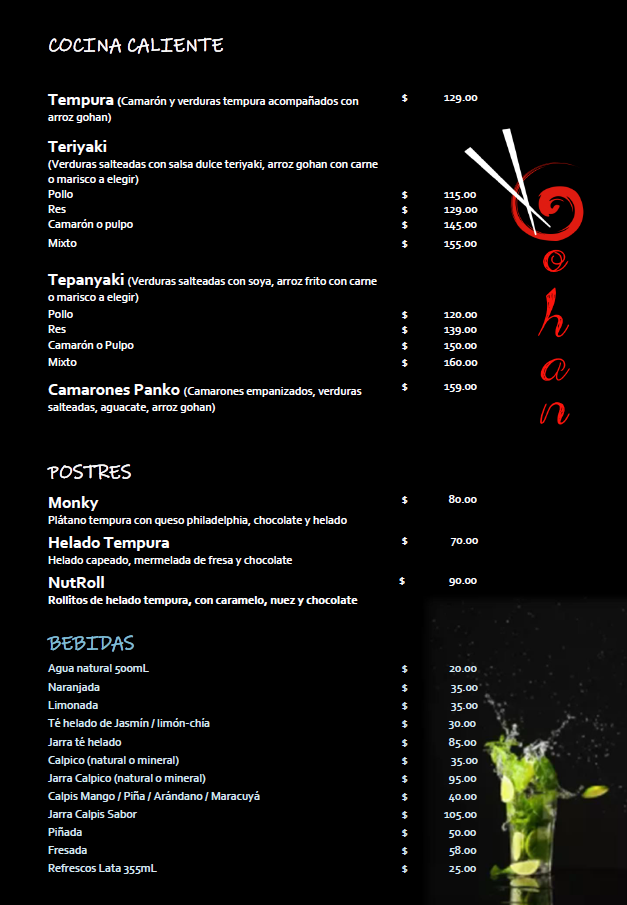 I got a Masago Especial roll, which had seaweed, avocado, cucumber, and kanikama on the inside, and on the outside it had rice, masago, tampico, and a chunk of panko shrimp on top. I’m not exactly sure how to describe the flavor, because like with most sushi rolls the flavors all kinda blend together. But, it had just the perfect amount of sweetness and saltiness, and I added some siracha, so spiciness as well! Also, it was very soft and fell apart in your mouth, which was a plus for me, but it also had a bit of crunchiness to it from the piece of shrimp and tampico. I do have to say, this is probably one of the best sushi rolls I’ve ever had! 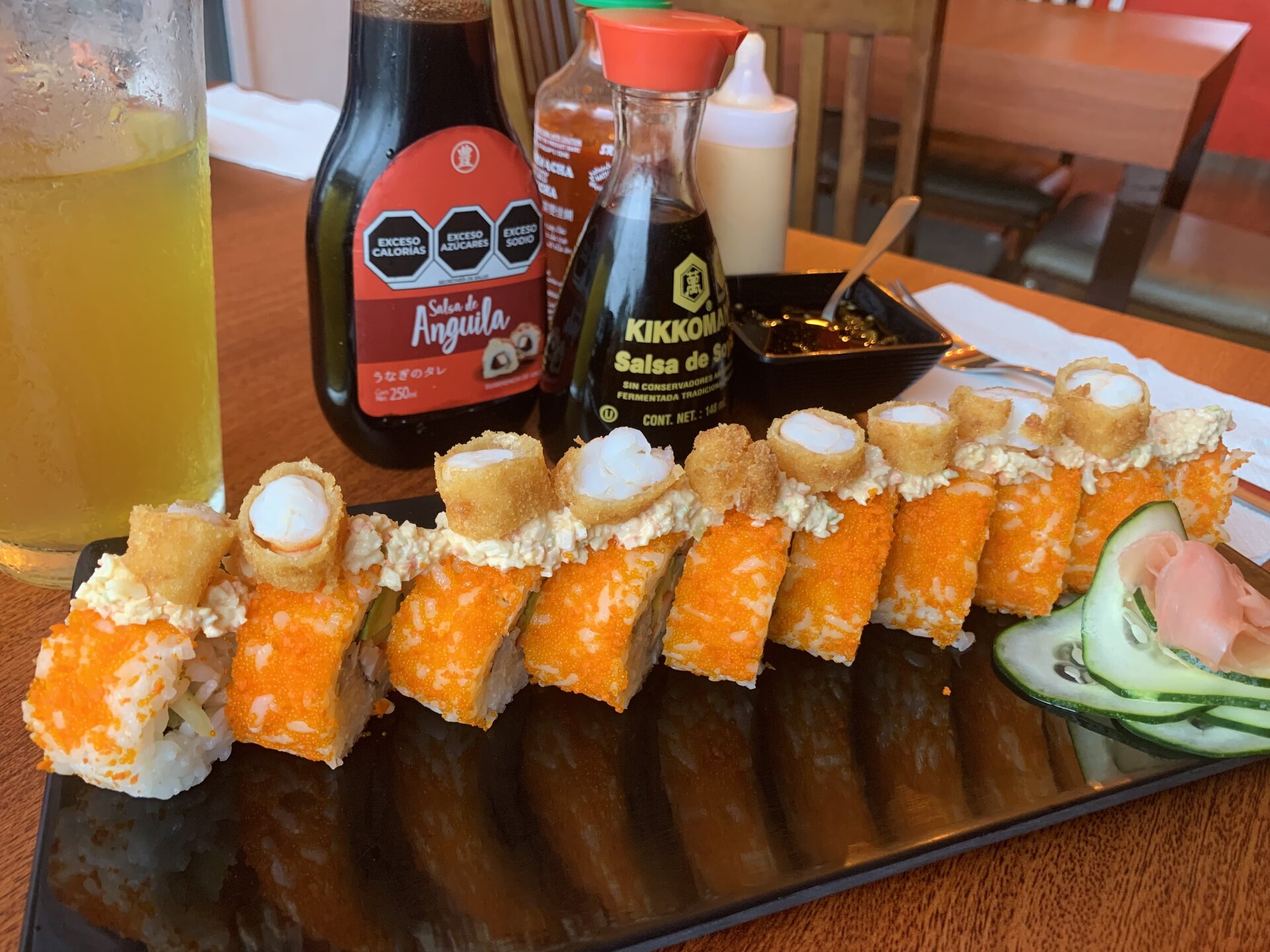 My dad doesn’t really like sushi rolls, so he normally gets a yakimeshi or sashimi, but today he got both! Well, kind of. They had three different presentations for tuna; regular sashimi, thicker pieces which were called Tiraditas, and little cubes which were called Tartar, and he got the Tartar. The fish itself had olive oil, lime, salt, and oil, and it wasn’t super fishy, but it was super flavorful and my dad says it reminded him of steak tartar. It was also super fresh and tender, and not only did he enjoy it, but so did Michi. She got one bite and then wouldn’t stop screaming for more!! She loooves fish. Anyways, the sauce that came with the fish was a fusion between an Asian sauce and an aguachile sauce without spiciness. It was really creative, and super yummy. The plate also came with pickled ginger, and even though most of the time it is flimsy and wet, this ginger was crispy and you could even hold it up and it would keep its shape instead of flopping down like it does most of the time. The flavor was also much stronger, and it seemed a lot fresher. The yakimeshi he got had shrimp in it, and it was one of the best yakimeshi he’s ever gotten! It was so flavorful and so perfectly seasoned that he didn’t add even a drop of soy sauce or siracha or anything else! It was amazing on it’s own! Also, the shrimp was perfectly cooked and it too was delicious! And, one more thing, they had bonito flakes here! My dad had seen it on another dish fom the menu and asked for a little bowl of them, which he put in both his meals. To me it just tasted like fishy cardboard, but my dad says they are an aquired taste, and he finds them quite yummy. 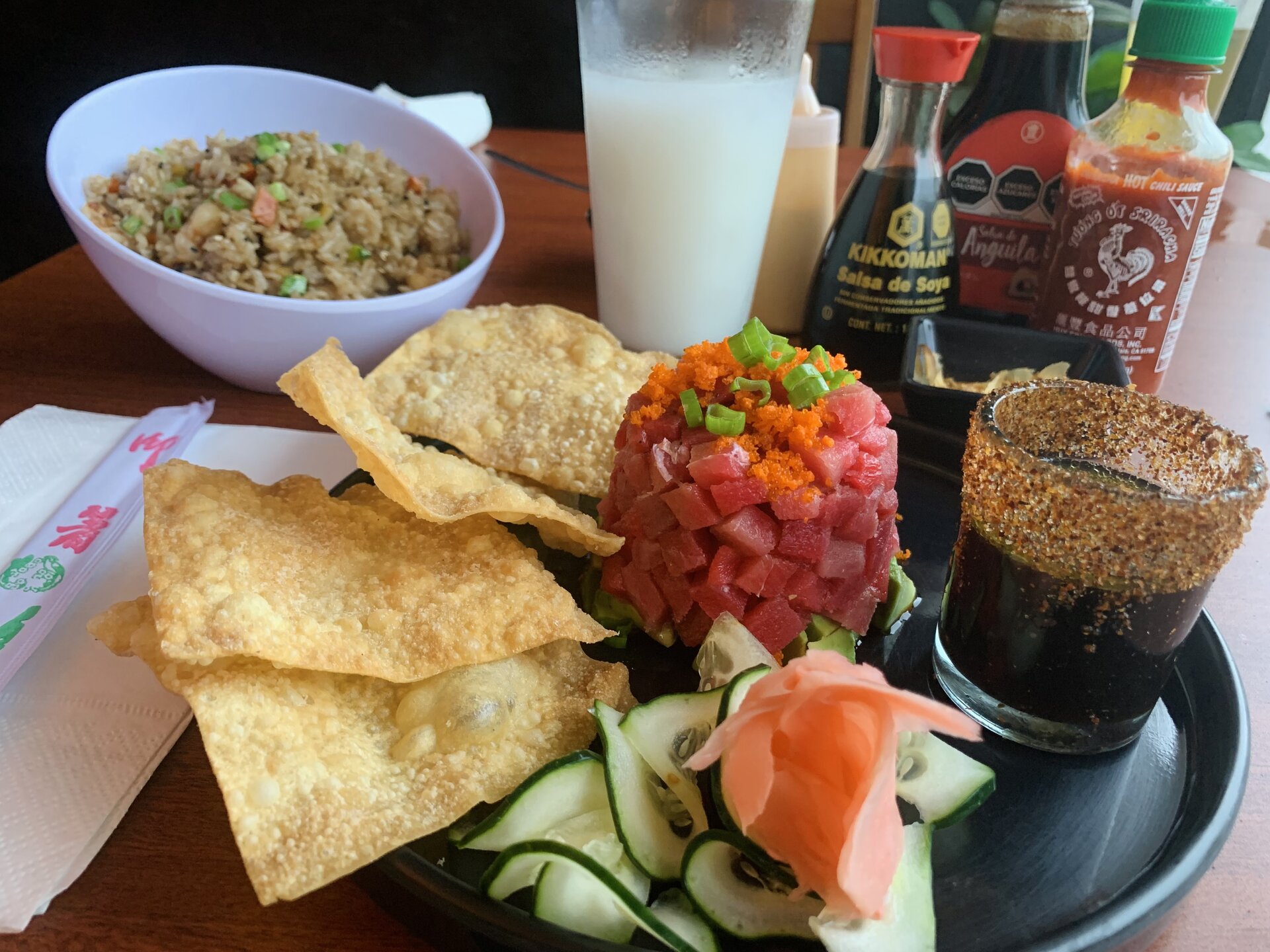 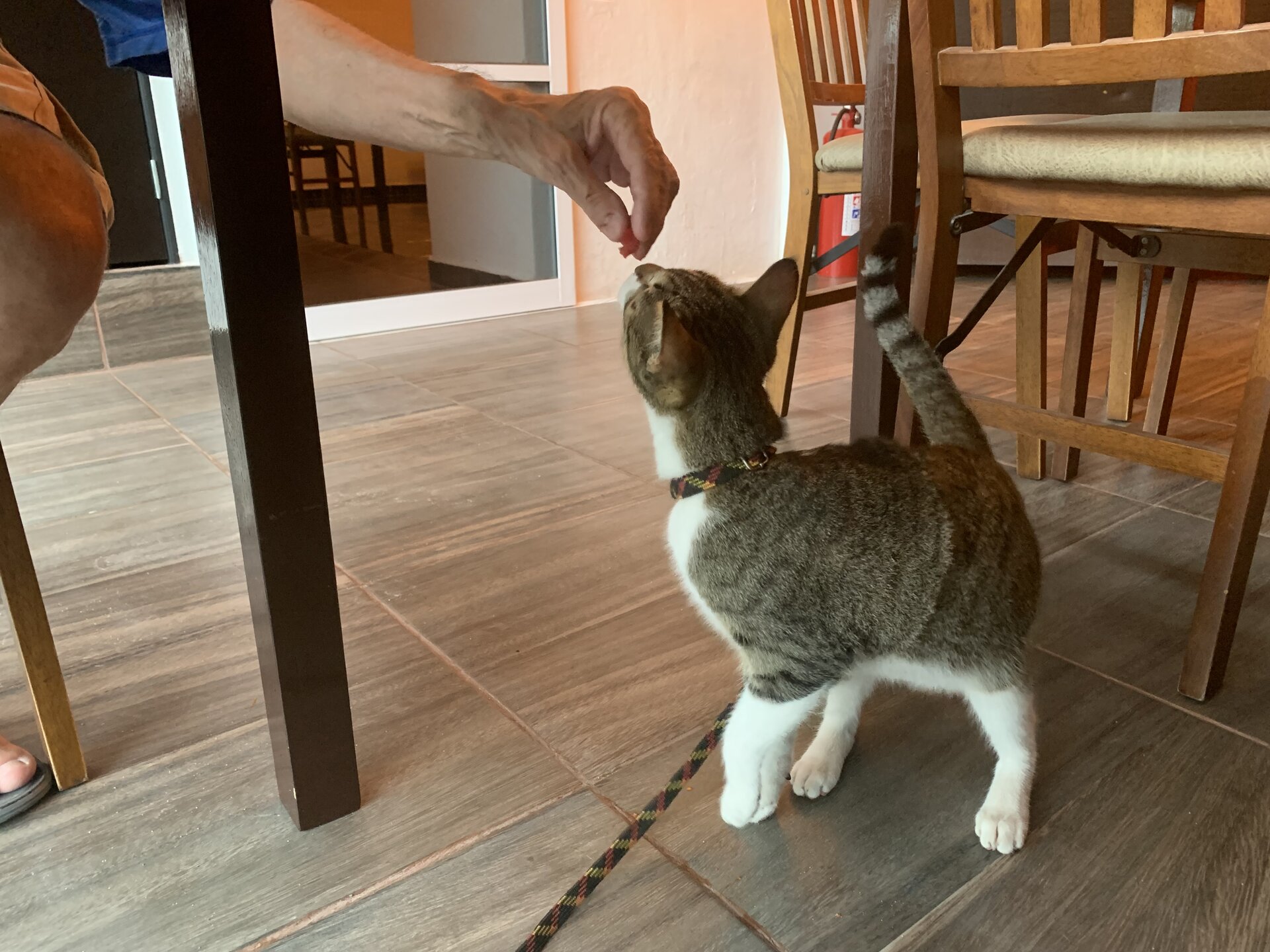