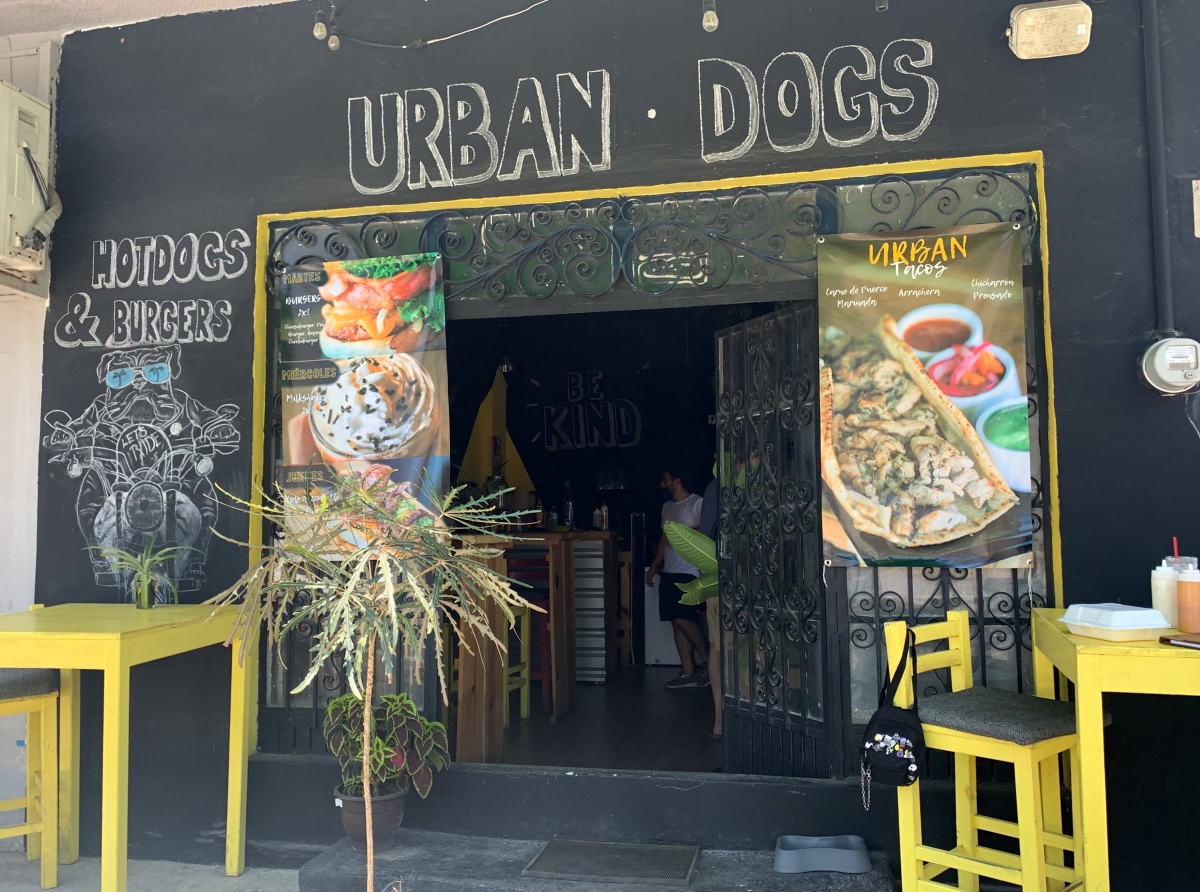 Today we went to Urban Dogs and got delicious hot dogs and a burger.

School has been very hectic for me for the past couple weeks as I was trying to finish up the last of my work, and I just got out of school a few days ago. But, I really haven’t had time to go out and write reviews until today. So, we went to Budaixi, a Taiwanese kitchen. Or at least that was the plan. When we got there we were told the place wasn’t pet friendly and Michi couldn’t come in, so we had to go somewhere else. But we’ll definitely come back another day without Michi! Anyways, we ended up going to Urban Dogs, since it’s been recommended many times before, and it’s really close to the first place we were trying to go to. It’s located on Merida 109 in Versalles, and is open Tuesday-Sunday from 8:00 am-10:30 pm. 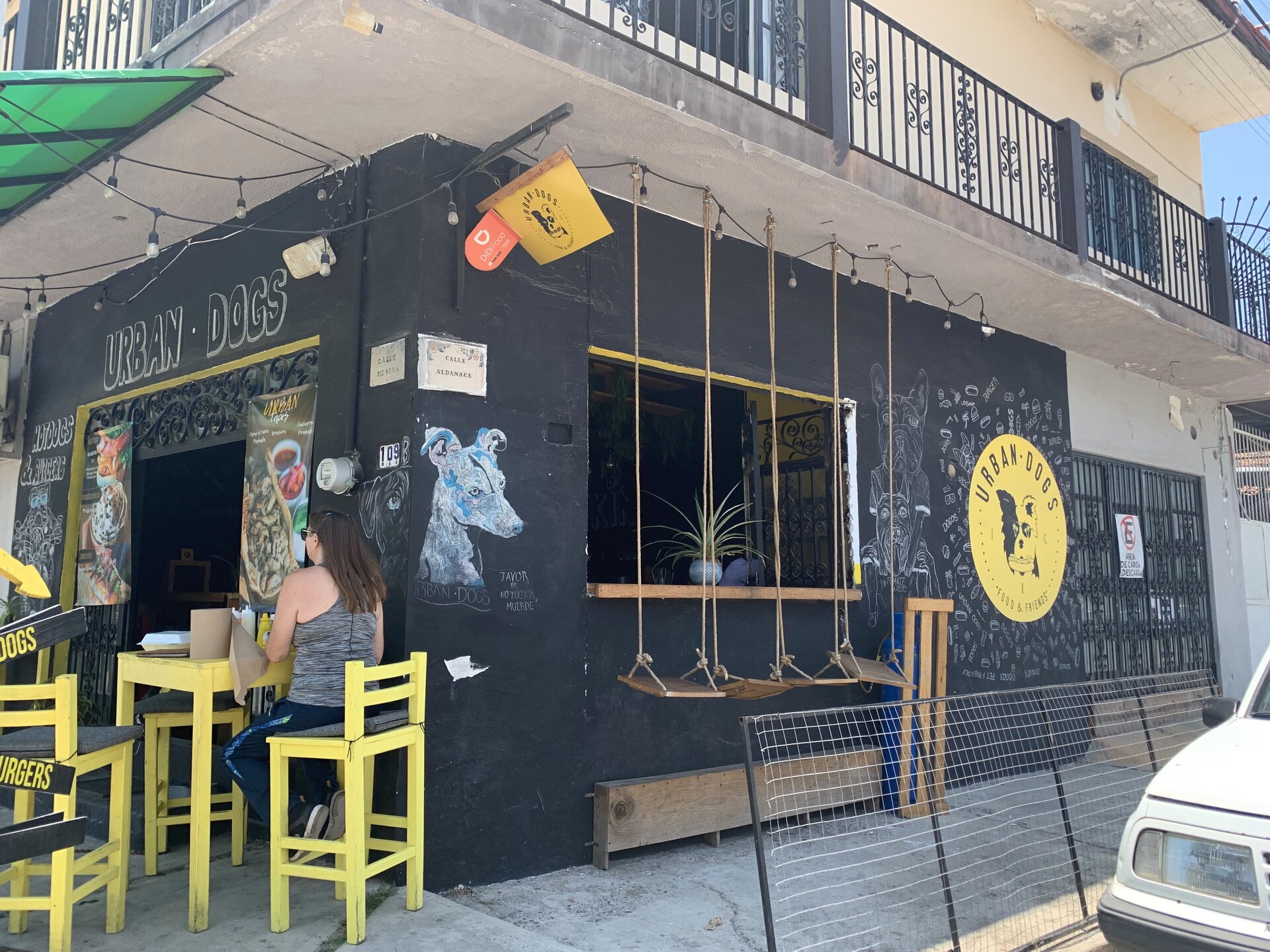 The owner of Urban Dogs, Christopher, moved to Puerto Vallarta 12 years ago and started working at a restaurant similar to his that served hamburgers, fries, and that sort of thing. The owner sadly didn’t keep the restaurant open for long, but it gave Christopher the idea to open up his own restaurant. So, he started saving up money, and 1 year and 7 months ago he opened Urban Dogs! He mainly serves a variety of hot dogs and hamburgers but he also has many sides (including sweet potato fries), chicken burgers, and tacos! Though, the tacos aren’t on the menu yet. And, fun fact! His hot dogs and hamburgers are named after dog breeds, but the style also matches where the dog is from. For example, the Xoloitzcuintle is a dog from Mexico, and the Xoloitzcuintle hot dog is a Mexican-style hot dog. 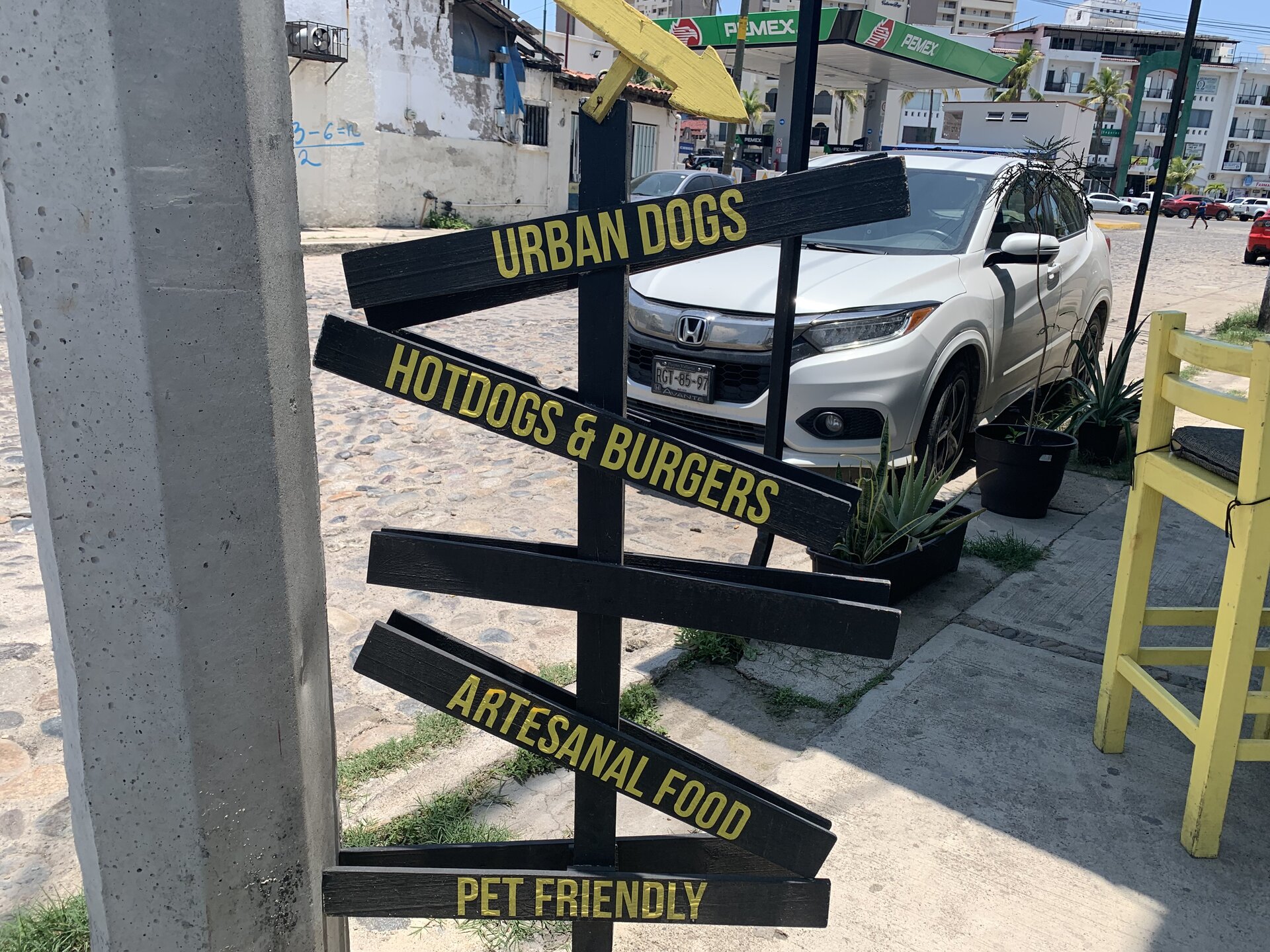 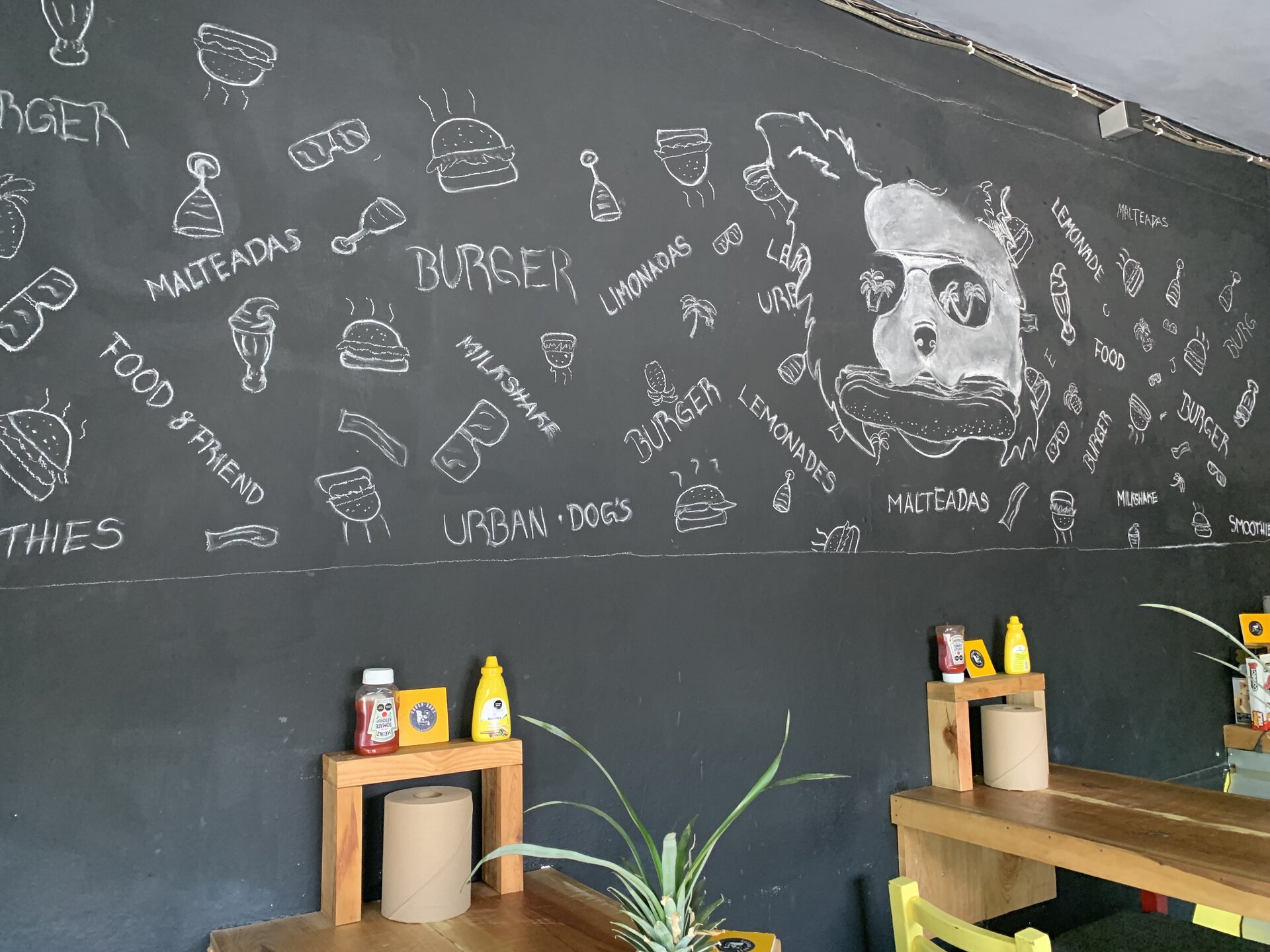 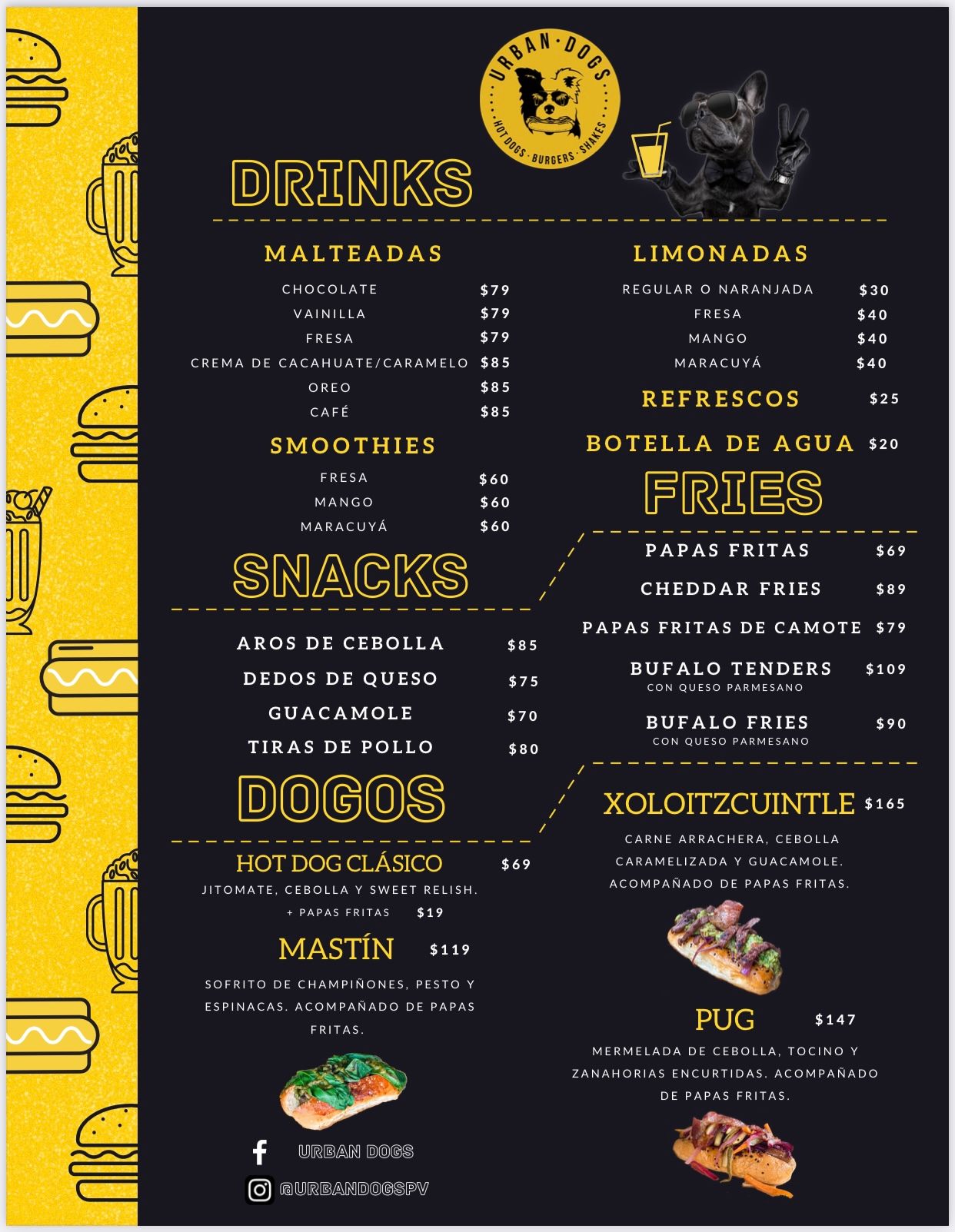 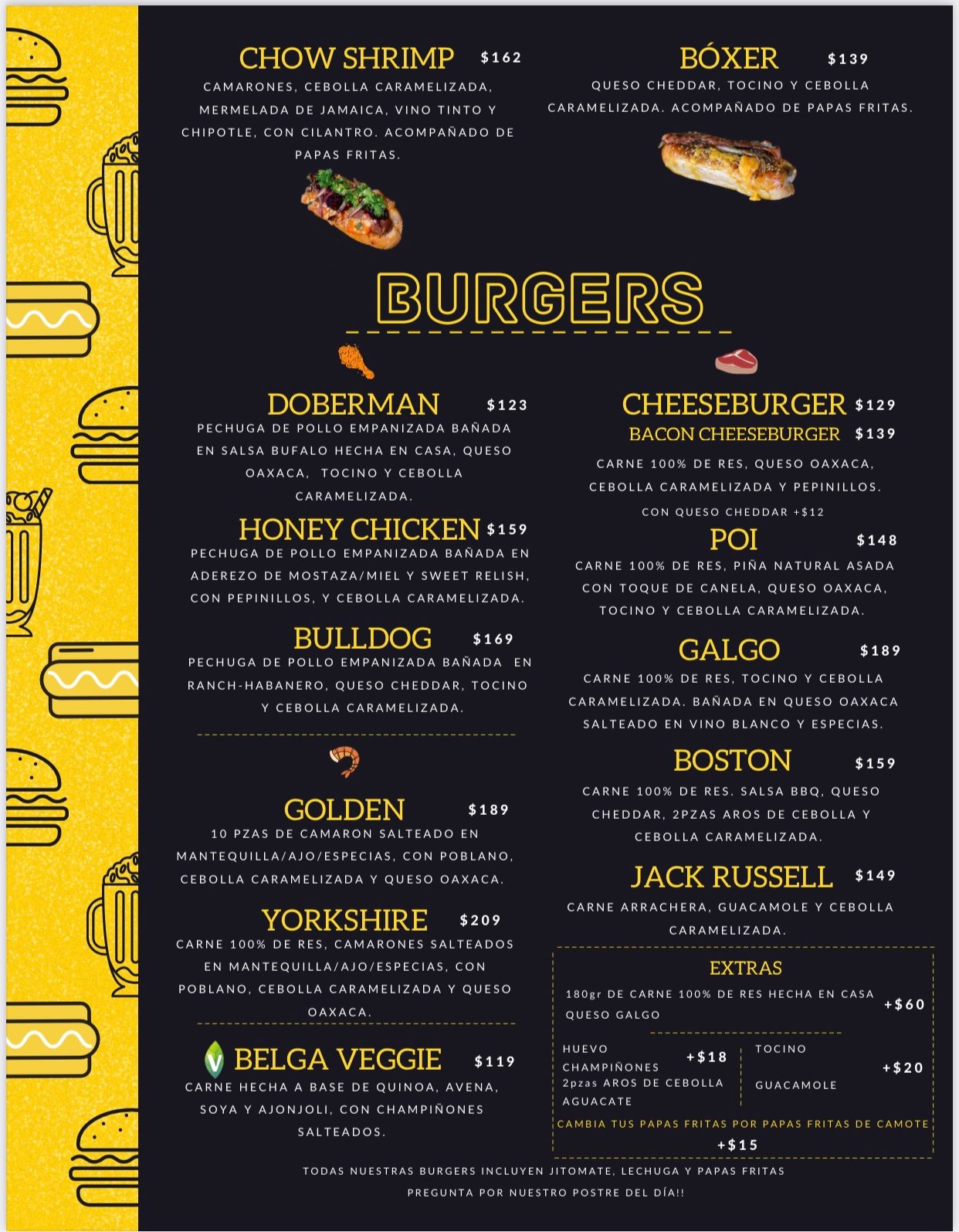 I got a Boxer hot dog, which had melted cheddar cheese, caramelized onions, and bacon! The bun was super soft and fluffy and seemed really fresh, and the hot dog itself tasted like real meat and not fake, processed meat. The cheese was a little sharp, so it gave the dog a nice, strong flavor. The onions added a really nice sweetness, and the bacon added some saltiness and crunch! All put together it was an amazing hot dog, and all the flavors and textures complimented each other perfectly! I also got a vanilla milkshake to drink, and it was super creamy and super rich. So much that I couldn’t even finish it! But it was delicious!! 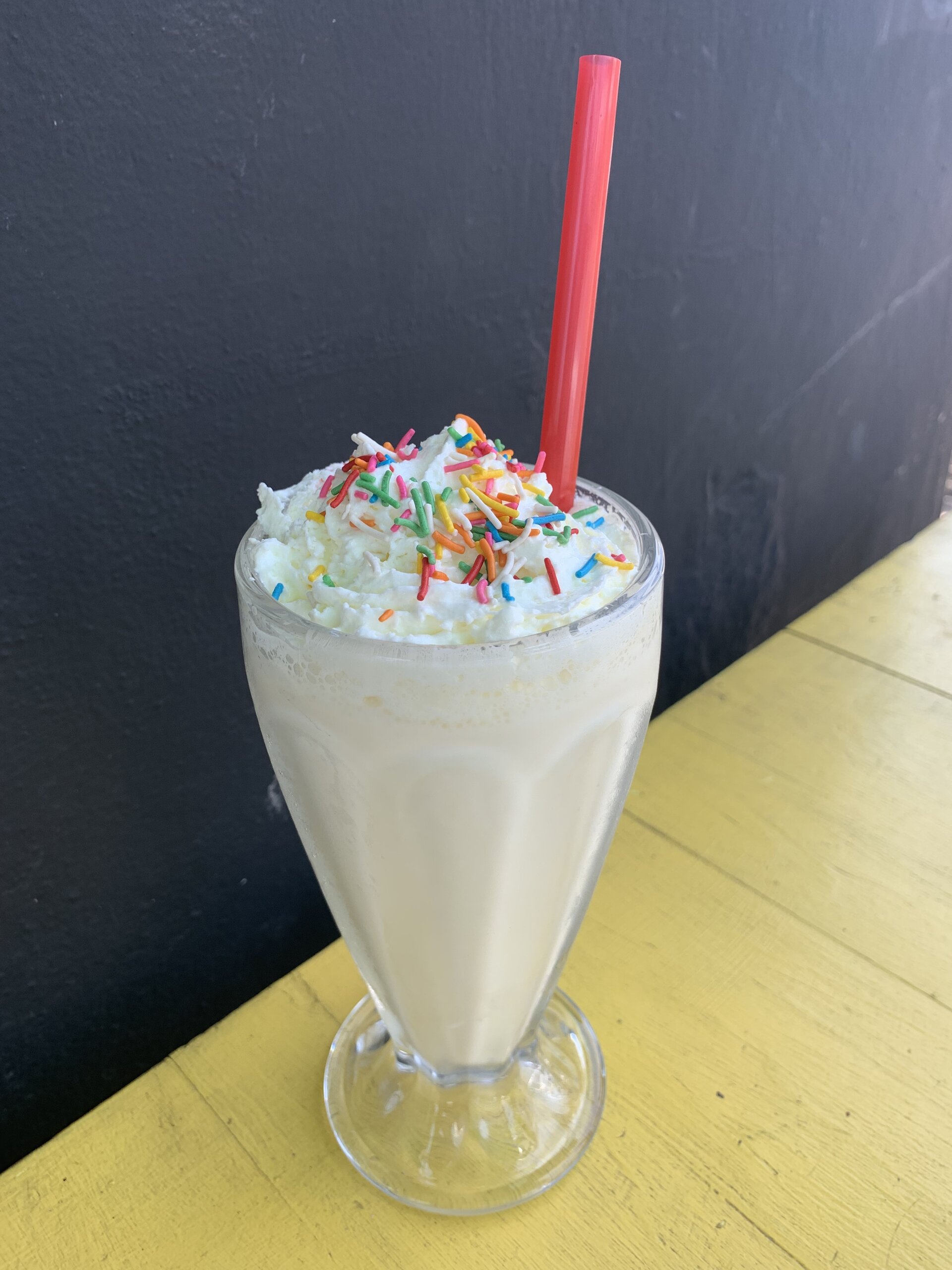 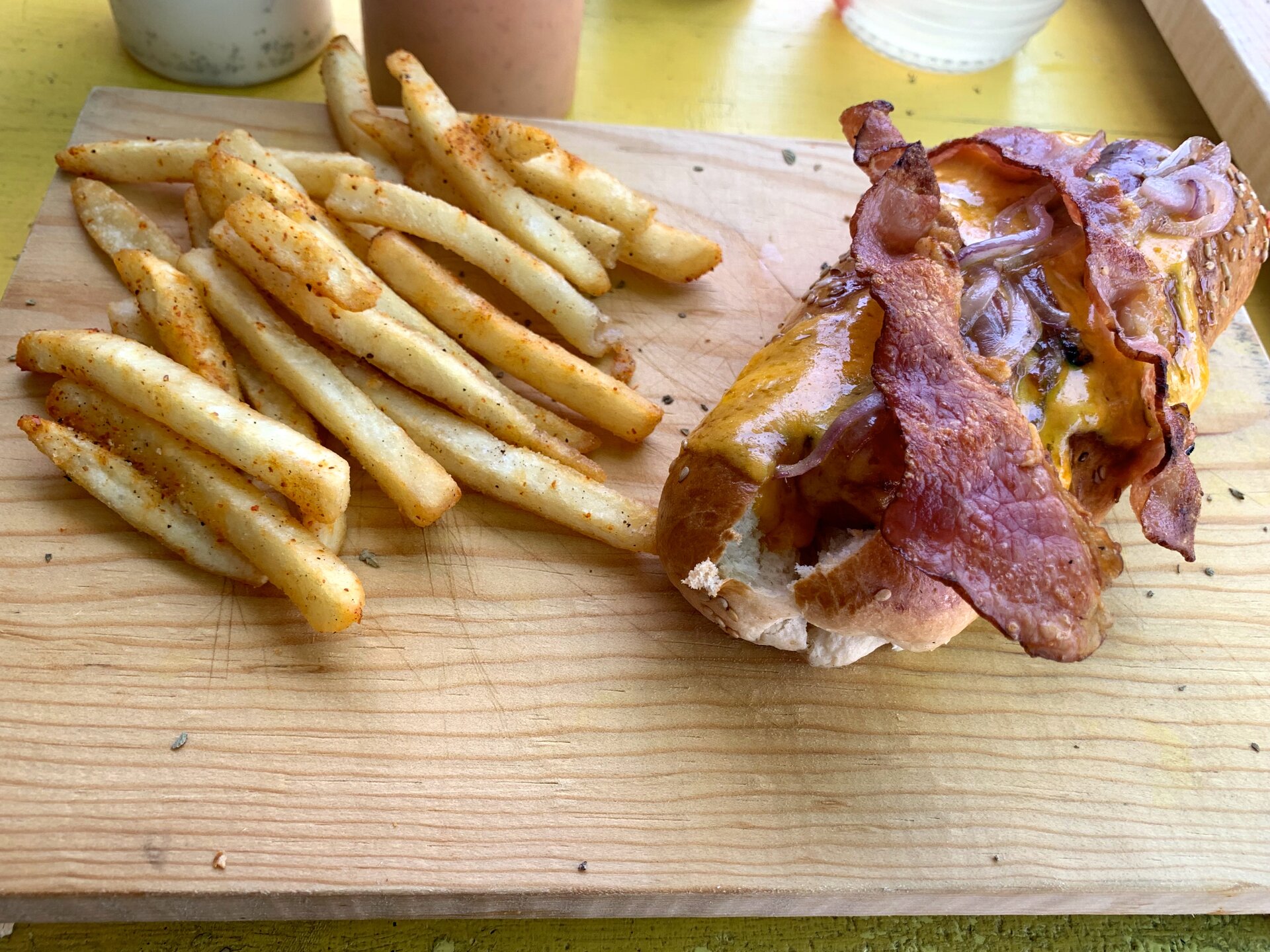 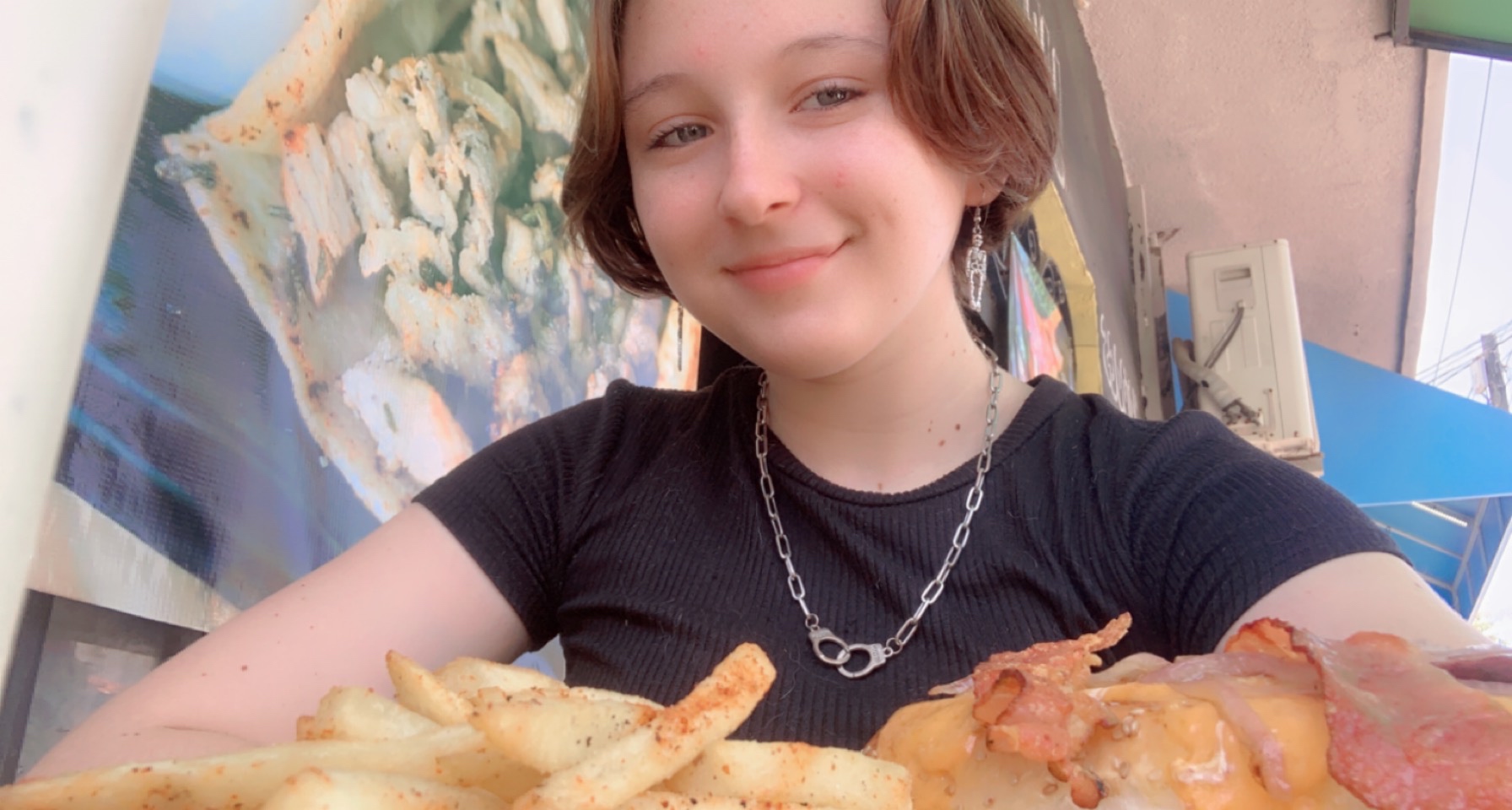 My dad got a Mastin hot dog, which had mushrooms, spinach, and pesto! But, he also asked for some cheese, which was fried with white wine before it was put on the dog. The spinach was also grilled, so it wasn’t just raw spinach. In my dad’s words, he was super impressed at how Christopher took everything to “the next level,” and put in a lot of effort to make his food the best it could be. Also, it is very common for restaurants to have a chile de arbol sauce, but here there was also a chile de arbol cream sauce, which my dad absolutely loved. 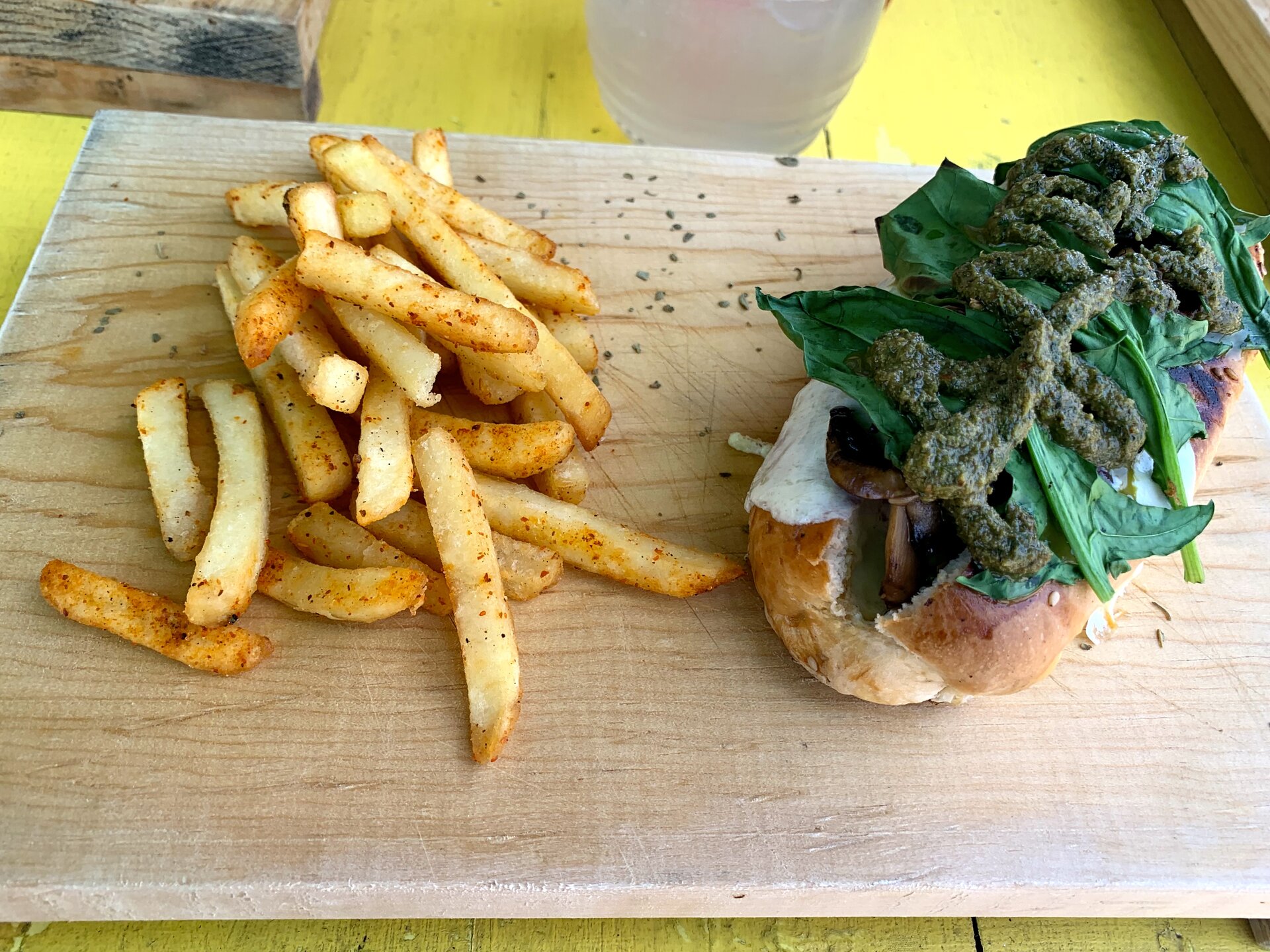 My mom got a Jack Russell burger, which instead of a patty or chicken it had arachera, or skirt steak, guacamole, and caramelized onions. My mom was really surprised that the steak wasn’t chopped up, and was a big, thick piece, but it was a relief for her to see how tender it was! It was suuuuper tender. And it was also very tasty, and perfectly seasoned. It was just a great burger! Also, isntead of normal fires my mom got sweet potato fries. 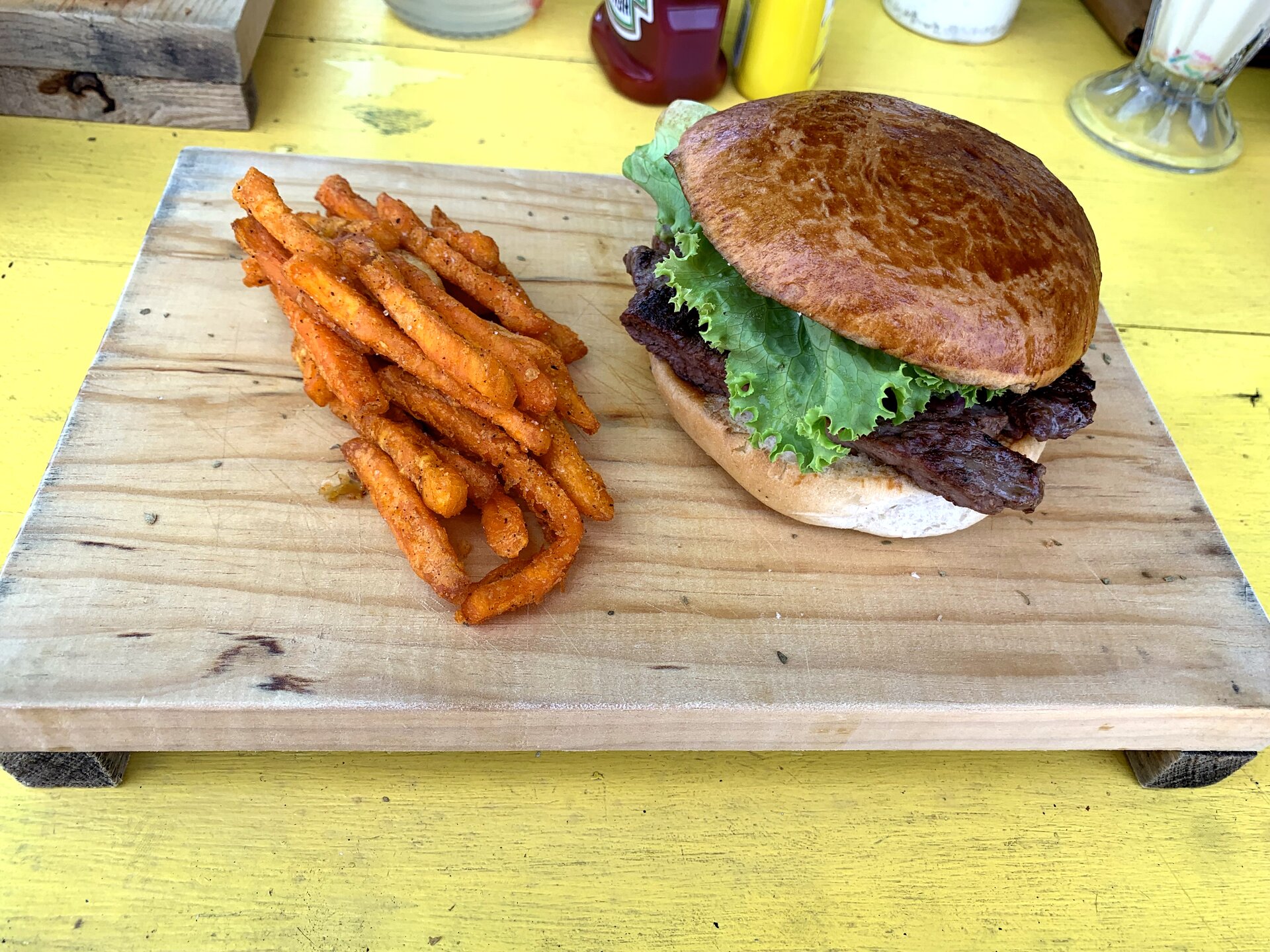